HUMAN GRIM REAPER SEPTEMBER MOURNING WILL SEEK OUT NEW SOULS THIS JANUARY 2019
PORTLAND, OR, 06/12/2018 — Bestselling writers David Hine, Mariah McCourt (editor of Emily the Strange, The Last Unicorn), and metal singer/songwriter sensation Emily Lazar (aka: September Mourning) team up with artist Tina Valentino to tell the story of a human grim reaper hybrid and her destiny in SEPTEMBER MOURNING. Issues #1-4 of the ongoing series, which first launched through Kickstarter, will be collected into trade paperback and available from Image/Top Cow Productions this January. In conjunction with the release of this book, September Mourning will be releasing new music via Sumerian Records, which will bring further life to the storyline.

Set in a world where Reapers prey on the souls of the living, imprisoning them in the shadow-land of Mortem, there is one last hope for humanity. Her name is September Mourning. Half human, half Reaper, she takes the souls of the wicked so the innocent can live again. September has joined forces with a woman who was murdered and restored to life, and a young blind girl who sees only the dead. Together, as The Trinity, they set out to fulfill a prophecy that will finally free all the lost souls who are trapped in Mortem. 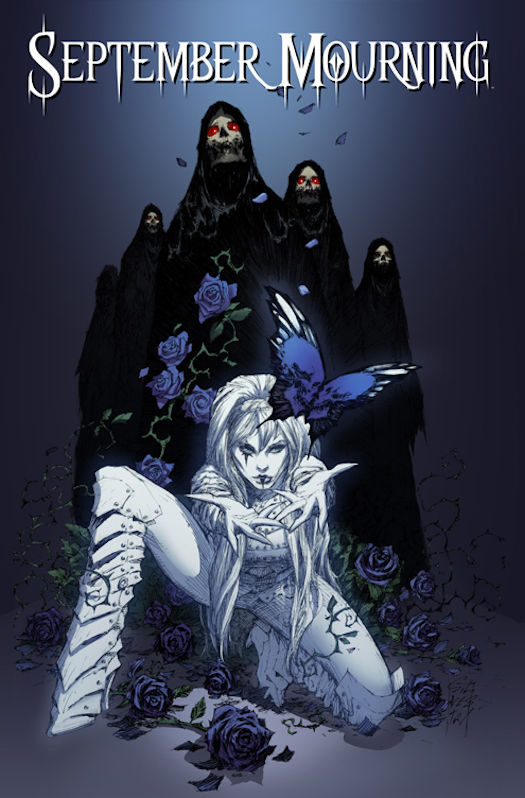 ABOUT IMAGE COMICS
Image Comics is a comic book and graphic novel publisher founded in 1992 by a collective of bestselling artists. Image has since gone on to become one of the largest comics publishers in the United States. Image currently has five partners: Robert Kirkman, Erik Larsen, Todd McFarlane, Marc Silvestri, and Jim Valentino. It consists of five major houses: Todd McFarlane Productions, Top Cow Productions, Shadowline Comics, Skybound Entertainment, and Image Central. Image publishes comics and graphic novels in nearly every genre, sub-genre, and style imaginable. It offers science fiction, fantasy, romance, horror, crime fiction, historical fiction, humor and more by the finest artists and writers working in the medium today. For more information, visit www.imagecomics.com.
Posted by Qwill at 5:35 AM