Interview with Rebecca Roanhorse, author of Trail of Lightning


Please welcome Rebecca Roanhorse to The Qwillery, as part of the 2018 Debut Author Challenge Interviews. Trail of Lightning was published on June 26th by Saga Press. 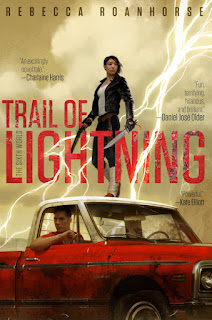 TQ:  Welcome to The Qwillery and congratulations on your recent Nebula win for Short Story. What is the first fiction piece you remember writing?

Rebecca:  Thanks for having me! Let's see...I remember writing a poem in 3rd grade about a tree succumbing to the inevitability of Fall. It was very tortured and angst-ridden. It went on to win a school-wide award. The first SFF story I remember writing was in 7th grade. We were supposed to write a science report on the planets and I turned my report into a story about a an astronaut on a suicide mission into the sun. That one did not win any awards. lol. What can I say, I was an emo kid.

Rebecca:  A hybrid. I like to know where I’m going, but I’m not married to it. I like to leave room for the story to surprise me while I’m telling but, but I find that without a clear goal of what kind of story I’m telling, the writing gets lost and slo​pp​y and I end up doing too many rewrites. I like to write fairly clean out of the gate.

Rebecca:  What hasn't? Everything around me. Everything I read. My lived experiences. I sponge it all up and it comes out in my writing. I think most writers are like that.

TQ:  Describe Trail of Lightning in 140 characters or less.

TQ:  Tell us something about Trail of Lightning that is not found in the book description.

Rebecca:  There’s a gun-running, boot-legging paramilitary hideout that's also a honky tonk bar called Grace’s All-American that’s run by a Black woman and her kids. They are the only non-Navajo characters in the book, and they will become Maggie's allies and sometimes antagonists and second family. They're a lot of fun.

TQ:  What inspired you to write Trail of Lightning? What appeals to you about writing Dystopian / Post-Apocalyptic fiction?

Rebecca:  I wanted to write an Indigenous story set in the future because so many stories set us in the past. But I think it’s not really accurate to call the story dystopian. The world after cataclysmic climate change is bleak outside the walls of the Navajo reservation, but inside things are going pretty good…except for the monsters, of course.

TQ:  What sort of research did you do for Trail of Lightning?

Rebecca:  A lot of it is simply drawn from my real life experiences of living on the Navajo reservation. The people and places are familiar because I lived them. The stories are stories that I learned through studying Navajo law (I practiced law on the Navajo reservation and part of passing the ​B​ar is learning traditional stories) or by reading the traditional stories that are publicly available. I tried to be thoughtful in what stories I told and what stories and characters I changed to fit my imaginary world. I got various Navajo friends to read the book and make sure I was staying in my lane. But that’s not to say my story isn’t wholly fictitious. I’m writing SFF, after all.

TQ:  Please tell us about the cover for Trail of Lightning.

Rebecca:  I love that cover. Two Navajo characters (Maggie Hoskie the protagonist and her sidekick, Kai Arviso) and Maggie's rez truck. But the best thing about it is there are no feathers, no braids, nothing that screams stereotypical Native. Instead we have two very contemporary Native characters looking pretty badass, if I do say so myself. Thanks to Tommy Arnold for that incredible art and Nick Sciacca for the art design, including that peeling weathered font. Very cool.

TQ:  In Trail of Lightning who was the easiest character to write and why? The hardest and why?

Rebecca:  ​Ma'ii (The Coyote) was probably the easiest to write, or if not the easiest, certainly the most fun. He's got such a distinct personality and he's a scene stealer. The hardest was probably Kai Arviso because while he is a sidekick, I wanted him to be a fully fleshed out character. He is also complex and contradictory in a lot of ways and he needed to be Maggie's foil, and her balance. I'm still not sure I understand him totally, but I have no doubt he will reveal himself to me in future books.​

TQ:  Which question about Trail of Lightning do you wish someone would ask? Ask it and answer it!

Rebecca:  While Trail of Lighting is a fast, fun post-apocalyptic adventure, it's also about violence and how it haunts us and changes the course of our lives. I would love for people to ask more about how they think trauma has changed Maggie's life, for better or worse. My answer would be it has alienated her from her community and her own self and because of it, she makes some spectacularly bad decisions. But it is also the source of her greatest strengths, quite literally, since her supernatural powers springs from trauma. It's a core idea in the book and I'm excited when people pick up on it.

TQ:  Give us one or two of your favorite non-spoilery quotes from Trail of Lightning.

1. "But I’m no hero. I’m more of a last resort, a scorched-earth policy. I’m the person you hire when the heroes have already come home in body bags."

2. “One of you assholes better start talking about that dead body in your truck, quick. Or I’m hauling you all down to the jail, where I’ll be happy to beat the both of you like a piñata until the truth falls out of your mouth like goddamn candy.”

Rebecca:  The second book in the Sixth World Series, Storm of Locusts, drops April 2019, and later that year I also have a middle grade book, Race to the Sun, coming out on Rick Riordan's imprint for Disney-Hyperion. And then in 2020 I have an Anasazi-inspired epic fantasy coming, Between Earth and Sky, wherein the great matriarchal clans of a prosperous cliff-city vying for power against a backdrop of political intrigue, celestial prophecies, rising rebellion & dark magic.

Rebecca:  Thanks for having me! 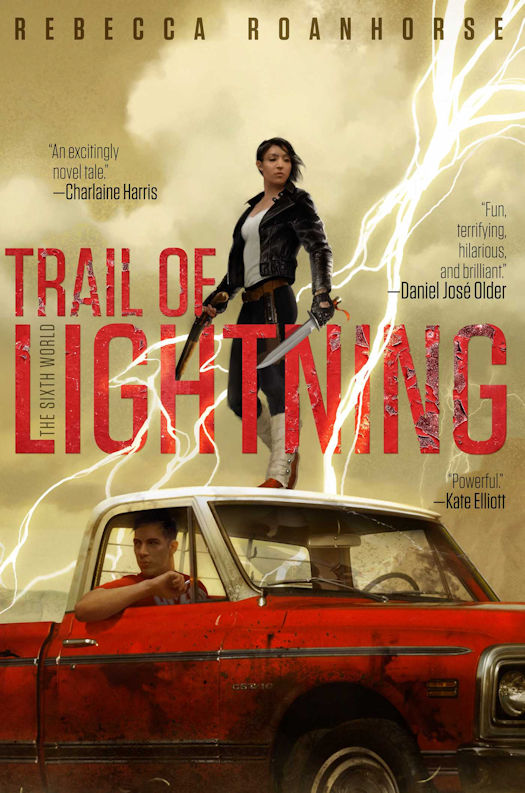 “Someone please cancel Supernatural already and give us at least five seasons of this badass indigenous monster-hunter and her silver-tongued sidekick.” —The New York Times

While most of the world has drowned beneath the sudden rising waters of a climate apocalypse, Dinétah (formerly the Navajo reservation) has been reborn. The gods and heroes of legend walk the land, but so do monsters.

Maggie Hoskie is a Dinétah monster hunter, a supernaturally gifted killer. When a small town needs help finding a missing girl, Maggie is their last best hope. But what Maggie uncovers about the monster is much more terrifying than anything she could imagine.

Maggie reluctantly enlists the aid of Kai Arviso, an unconventional medicine man, and together they travel the rez, unraveling clues from ancient legends, trading favors with tricksters, and battling dark witchcraft in a patchwork world of deteriorating technology.

As Maggie discovers the truth behind the killings, she will have to confront her past if she wants to survive.

Welcome to the Sixth World.

Rebecca Roanhorse is speculative fiction writer and Nebula, Hugo, and Sturgeon Award Finalist. She is also a 2017 Campbell Award Finalist for Best New Science Fiction and Fantasy writer. Her novel Trail of Lightning is the first book in the Sixth World series, followed by Storm of Locusts in 2019. She lives in northern New Mexico with her husband, daughter, and pug. Find more at RebeccaRoanhorse.com and follow her on Twitter at @RoanhorseBex.