SKYWARD, VOL. 1: MY LOW-G LIFE TRADE PAPERBACK WILL LAND IN STORES THIS SEPTEMBER

PORTLAND, OR, 06/19/2018 — The first story arc of the critically acclaimed, gravity-defying SKYWARD—by writer Joe Henderson (showrunner of Fox’s Lucifer) and artist Lee Garbett (Lucifer, Loki: Agent of Asgard)—will be collected into trade paperback and available this September. SKYWARD, VOL. 1: MY LOW-G LIFE will include issues #1-5 of the series.

One day, gravity on Earth suddenly became a fraction of what it is now. Set 20 years later, SKYWARD introduces a humanity that has adapted to its new low-gravity reality. And to Willa Fowler, who was born just after G-day, it’s pretty awesome. You can fly through the air! I mean, sure, you can also die if you jump too high. So you just don’t jump too high. And maybe don’t get mixed up in your dad’s secret plan to bring gravity back, which could get you killed…

"An immersive and entertaining read." —Newsarama

"Comics invite us to explore worlds where the sky's the limit, no superpower too great,
no story too small. But Skyward has given us a world where the skies are limitless and
the characters fly off the page with fresh voices and exciting possibilities." —Shawna
and Julie Benson

“This debut issue finds a way to tether readers to its high-flying story, and the issue
wraps with a bewildering cliffhanger that will leave you desperate for its next issue.” —ComicBook.com

"Henderson and Garbett have created a rich, imaginative new world anchored by a
vibrant, relatable heroine. The sky's the limit with this one." —Jay Faerber

“A confidant debut issue that mixes strong characterization with beautiful work from
Lee Garbett and Antonio Fabela that gives the reader a strong indication of what this
new series is about.” —Multiversity Comics 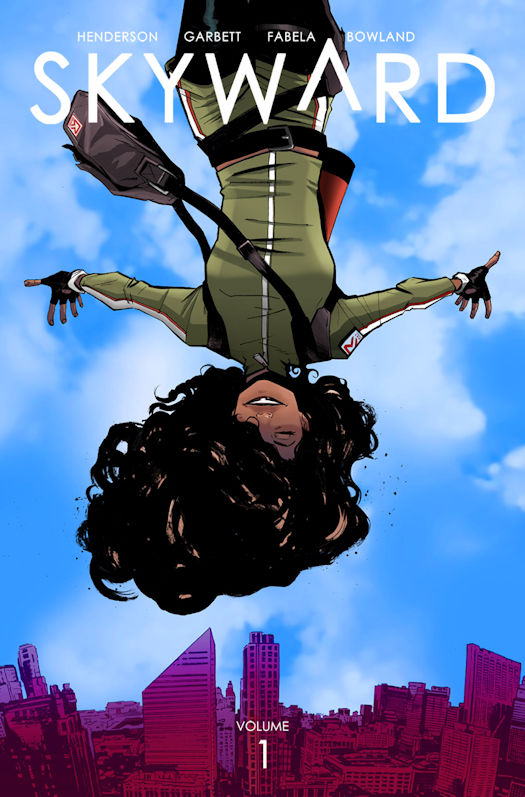