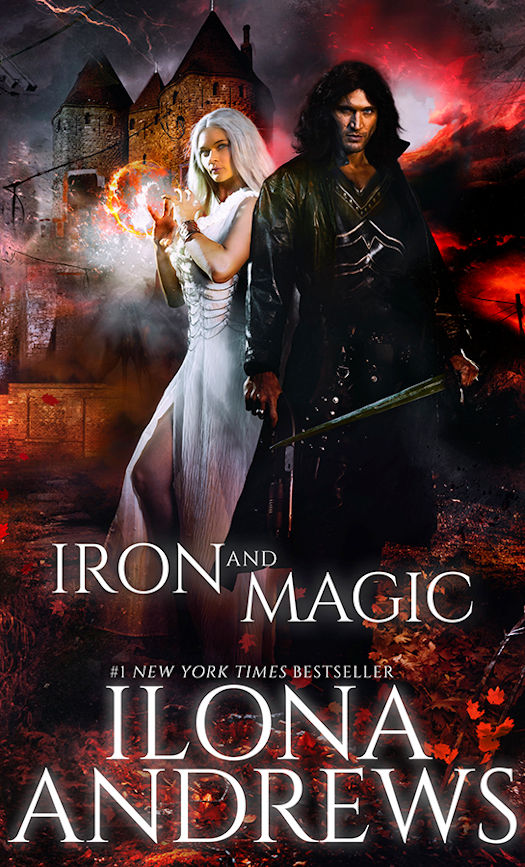 No day is ordinary in a world where Technology and Magic compete for supremacy…But no matter which force is winning, in the apocalypse, a sword will always work.

Hugh d’Ambray, Preceptor of the Iron Dogs, Warlord of the Builder of Towers, served only one man. Now his immortal, nearly omnipotent master has cast him aside. Hugh is a shadow of the warrior he was, but when he learns that the Iron Dogs, soldiers who would follow him anywhere, are being hunted down and murdered, he must make a choice: to fade away or to be the leader he was born to be. Hugh knows he must carve a new place for himself and his people, but they have no money, no shelter, and no food, and the necromancers are coming. Fast.

Elara Harper is a creature who should not exist. Her enemies call her Abomination; her people call her White Lady. Tasked with their protection, she's trapped between the magical heavyweights about to collide and plunge the state of Kentucky into a war that humans have no power to stop. Desperate to shield her people and their simple way of life, she would accept help from the devil himself—and Hugh d’Ambray might qualify.

Hugh needs a base, Elara needs soldiers. Both are infamous for betraying their allies, so how can they create a believable alliance to meet the challenge of their enemies?

As the prophet says: “It is better to marry than to burn.”

Hugh and Elara may do both.

Hugh is back but this time not as Roland's right hand man. He has lost everything  - his job, his wealth, his power, his immortality but more importantly the man he considered a father. He has nothing and no where to go. Along with his 300 elite soldiers - the Iron Dogs - Hugh is desperate to find a base and a purpose to keep on living. The White Lady, Elara Harper, has almost everything - a community devoted to her, a fortress and a lot of power. What she doesn't have is protection for her people. Elara is about to understand the saying 'better the devil you know' when she agrees to an alliance with the devil himself - Hugh d'Ambray. Their enemies won't know what hit them if they don't kill each other first.

When I first read that Ilona Andrews was writing a book about Hugh I thought that it was a joke. I couldn't believe that Andrews would spend time writing about the biggest baddie who murdered his way through at least three of the Kate Daniels books. I couldn't understand how the authors could make Hugh a credible hero after all of the things that he did to Kate and her friends. However, I dutifully read the sample chapters that Andrews put on their blog and when I saw that the eArc was available on NetGalley I dropped everything and rushed to download it.

I was a bit more than pleasantly surprised with Iron and Magic. Hugh is everything that I was expecting - arrogant, violent and driven. A brutal killer who seemed to have no moral compass. Through the story and his interactions with Elara we get to see a different side of Hugh and the man he wanted to be rather than the one he was. Hugh doesn't make excuses for his past behaviour which made him a more realistic, genuine character rather than turning into a 'baddie turned hero by the love of a good woman'. Had Hugh been written in any other way the story wouldn't have been as good, in my opinion.

Elara and her people are the newbies in this story that has so many characters from the Kate Daniels' series. She was referred to, not by name, in book 9 of the Kate Daniels series (Magic Binds) as the abomination and I wasn't certain how Andrews was going to weave the two stories together. This was done in a very clever way that both connects Elara to characters in Kate Daniels world but also serves to develop Hugh's character and backstory at the same time. I liked Elara. She was an interesting character that was as dominant as Hugh but in a much more subtle way. I am looking forward to seeing what direction Andrews' will take this character.

Overall, I really, really enjoyed this book which I think was partly down to the fact I didn't think I would. I like a good surprise and Iron and Magic gives you a few of those. Due to the nature of the main characters this book seemed a lot more violent than any of Andrews' other books. In retrospect, it probably isn't any more violent but just seems that way because Hugh is such a dark and broody character who has murdered his way through the last couple of books on Roland's behalf. It's not as sexy as I was expecting which I prefer. I never like when characters find the time to get all hot and sweaty in the middle of a big battle or in life or death situations. The steamy scenes in this story are fitting to both the characters and the plotline. I won't say that this is a prefect novel. I noticed a couple of lines borrowed from other books and other series written by Andrews which I am hoping will be sorted out before the book is published. This doesn't detract from the plotline but could have had the characters not been so strong. This is a great teaser to Magic Triumphs and I can hardly wait, even more now, for that instalment to come out. While Iron and Magic is billed as it's own series I don't think you will get that much from it if you haven't read at least the first 5 or 6 Kate Daniels' books. These are books you can read over and over so start from the beginning. For die hard fans get Iron and Magic on pre-order now!
Posted by Melanie at 11:13 AM