PORTLAND, OR, 06/01/2018 — At long last, Image Comics is pleased to announce that the award-winning webcomic BATTLEPUG by Mike Norton will be collected into a trade paperback COMPUGDIUM and available in January 2019.

BATTLEPUG: COMPUGDIUM will include all five volumes of Norton’s original fantasy/humor series together for the first time. It will also feature exclusive, extra content like sketches and art by some of the most creative artists in the business today.

“I can’t tell you how excited I am to be collecting the entire five volumes with my pals at Image,” said Norton. “This is the first book I ever wrote and drew myself, so it’s very special to me and I’m can’t wait to see it all together as the Compugdium for the first time!”

In BATTLEPUG, readers join the last Kinmundian and his faithful steed, The Battlepug, as they travel the world seeking revenge against every giant, ridiculous animal they can find. 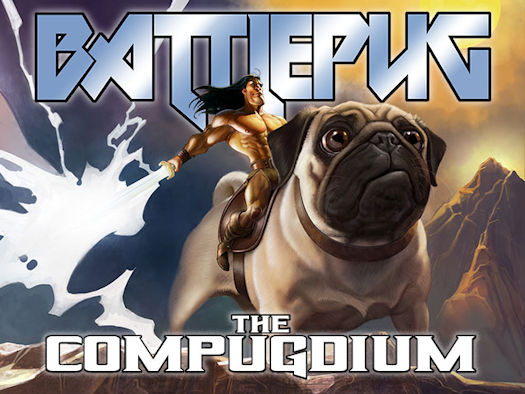 ABOUT IMAGE COMICS
Image Comics is a comic book and graphic novel publisher founded in 1992 by a collective of bestselling artists. Image has since gone on to become one of the largest comics publishers in the United States. Image currently has five partners: Robert Kirkman, Erik Larsen, Todd McFarlane, Marc Silvestri, and Jim Valentino. It consists of five major houses: Todd McFarlane Productions, Top Cow Productions, Shadowline Comics, Skybound Entertainment, and Image Central. Image publishes comics and graphic novels in nearly every genre, sub-genre, and style imaginable. It offers science fiction, fantasy, romance, horror, crime fiction, historical fiction, humor and more by the finest artists and writers working in the medium today. For more information, visit www.imagecomics.com.
Posted by Qwill at 8:09 AM