“These are the only comics awards exclusively about comics for younger readers and the love and appreciation for that material shows,” said Schigiel. “The categories are unique and fun, the ceremony itself is joyous and entertaining, kids vote for the winners, and the trophy is a literal toy! When I learned about these awards I dreamed of winning one. That Pix got two nominations and then won them both feels like overkill...but I'm not giving them back!”

While kids and teens vote for the KCA winners (who receive a Lego mini-figure trophy), the final nominees and categories are curated by active and retired librarians based upon online open nominations and internal review of material released in the prior year.

PIX, a superhero/fairy tale mash-up, follows the adventures of Pix, a teenage superhero who believes herself a fairy princess. TOO SUPER FOR SCHOOL, the second volume in the series, has Pix dealing with the challenges of her fairy beliefs and superhero actions at school.

The PIX books are intended for middle-grade readers, a growing category in publishing, particularly for graphic novels. Schigiel hopes the Kids' Comics Awards wins will bring some attention to the series he writes and illustrates. He added: “I love the Lego trophy, but the bigger 'prize' is the potential to raise awareness of the Pix books... I'm excited for the new eyes this can bring.” 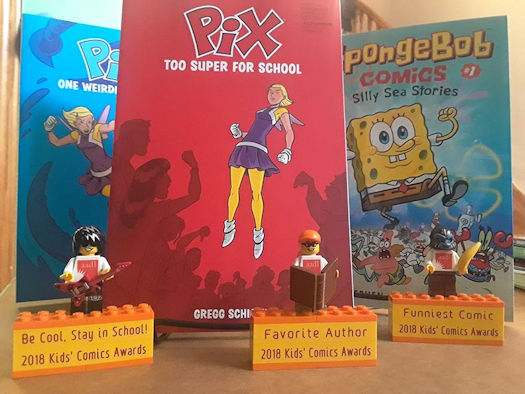 ABOUT IMAGE COMICS
Image Comics is a comic book and graphic novel publisher founded in 1992 by a collective of bestselling artists. Image has since gone on to become one of the largest comics publishers in the United States. Image currently has five partners: Robert Kirkman, Erik Larsen, Todd McFarlane, Marc Silvestri, and Jim Valentino. It consists of five major houses: Todd McFarlane Productions, Top Cow Productions, Shadowline Comics, Skybound Entertainment, and Image Central. Image publishes comics and graphic novels in nearly every genre, sub-genre, and style imaginable. It offers science fiction, fantasy, romance, horror, crime fiction, historical fiction, humor and more by the finest artists and writers working in the medium today. For more information, visit www.imagecomics.com.
Posted by Qwill at 6:18 AM