Interview with Michael Rutger, author of The Anomaly


Please welcome Michael Rutger to The Qwillery, as part of the 2018 Debut Author Challenge Interviews. The Anomaly is published on June 19th by Grand Central Publishing. 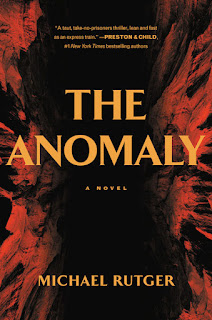 Michael:  I moved around the world a lot when I was a young kid, because of my father’s job (he was an academic). My mother had taught me to read by the time I was four, partly as a way of keeping me occupied, I suspect — and so I always read a lot. When I was in my early teens I started writing a kids’ adventure story based on a series of books I’d read and re-read many times. I discovered that writing the beginning of a story is fun and pretty easy, but then it gets much harder. That hasn’t changed.

Michael:  A little of both. I have sketched out whole stories — though rarely — and I do plot sections sometimes. But usually I start off just with the underlying ideas, characters, and some sense of where I’m headed… and let it evolve from there. THE ANOMALY was a little different because it’s tightly structured in the second half, and so a natural-born hybrid had to tilt a little more toward plotter on this occasion.

TQ:  What is the most challenging thing for you about novel writing?

Michael:  Working out a compelling plot is always challenging, but the first hard thing is choosing what to write. Ideas come easily. The challenge is deciding which of them is worth the commitment of a year of your life, and which truly has the potential to expand from being a simple “What if?” or question mark in your head into something that will provide a strong enough scaffold for a narrative experience that will engage the reader throughout an entire book.

TQ:  What has influenced / influences your writing? How does writing for film affect (or not) your novel writing?

Michael:  Like all writers, I’m influenced by other writers. You start off trying to emulate the writers you enjoy — and trying to recreate the experience they give you in their books — even if only unconsciously. After a while you realize you’ve left that behind and are trying to find and then refine your own voice, your own take on the world and the stories to be found in it. Writing for film yields a helpfully different perspective on the process. In prose you can simply tell people things, in words. In movies and TV, it’s much better to show them. Bringing a little of that to novels, by presenting the reader with images and scenes and letting them do the work of interpreting what’s going on, and what it says about the characters, can make a book a more visceral and immersive experience.

TQ:  Describe The Anomaly in 140 characters or less.

Michael:  Can I go with the new 280 character limit?

“YouTube archeologist Nolan Moore and his team set out to retrace the steps of an explorer who claimed to discover a mysterious cavern in the Grand Canyon. For once, he may have actually found what he seeks… but also possibly the end of the world.”

TQ:  Tell us something about The Anomaly that is not found in the book description.

Michael:  Every single thing that is presented as fact, is a fact. The history, the back story, the myths and legends… it’s all true. The fun for me, and the challenge, was taking all that true stuff and making something quite untrue out of it — while remaining credible.

TQ:  What inspired you to write The Anomaly?

Michael:  I’ve been fascinated by unsolved mysteries and strange things about the world and pre-history my whole life. With THE ANOMALY, I felt that I’d finally found a way of taking that obsession into novel form. When I realized this, and the character of Nolan Moore appeared in my head, I knew I’d found what I’d wanted to write.

TQ:  What sort of research did you do for The Anomaly?

Michael:  Quite by accident, I came upon the story of an explorer who claimed to have found something buried deep in the Grand Canyon. After that I nosed around, trying to find out anything that had been found to confirm it… and found nothing. So instead I researched local Native American myths, tied it with things I already knew about speculative areas in American history, and mixed it all together into something strange and different…

TQ:  Please tell us about the cover for The Anomaly.

Michael:  THE ANOMALY is about a very old mystery, buried deep in a cave system. The cover image captures that well… evoking the locale and the intrigue, without giving anything away.

TQ:  In The Anomaly who was the easiest character to write and why? The hardest and why?

Michael:  THE ANOMALY is told in a first person voice—Nolan Moore, the central character. He was the easiest character to write, because I really enjoy writing in the first person: it makes it feel as if you’re telling a story to someone sitting right there in front of you. That also made him the hardest person to write, however, because he has to convey a universe through his description of events and his internal dialog — evoking not only his own story and feelings, but those of all the other characters.

TQ:  Which question about The Anomaly do you wish someone would ask? Ask it and answer it!

Question: I love THE ANOMALY, its characters and the way it prizes open the door on our understanding of the world, showing us some of the mysteries lurking underneath. Will there be any more like it???

TQ:  Give us one or two of your favorite non-spoilery quotes from The Anomaly.

Michael:  Hard for me to choose a favorite quote from my own writing, so instead I’ll give you the two epigraphs I used for the first part of the novel, which I think capture some of that the book is about…

It’s the loss of the Grail that sets us out
on the Quest, not the finding.
— Martin Shaw
The Snowy Tower

5. The Lord saw that the wickedness
of man was great in the earth,
and that every intention of the thoughts
of his heart was only evil continually.
— Genesis,Chapter 6

Michael:  At the moment I’m halfway through a sequel to THE ANOMALY, and also working with a company in Hollywood who are aiming to bring THE ANOMALY to the big screen… fingers crossed.

Michael:  A huge pleasure — thank you for having me! 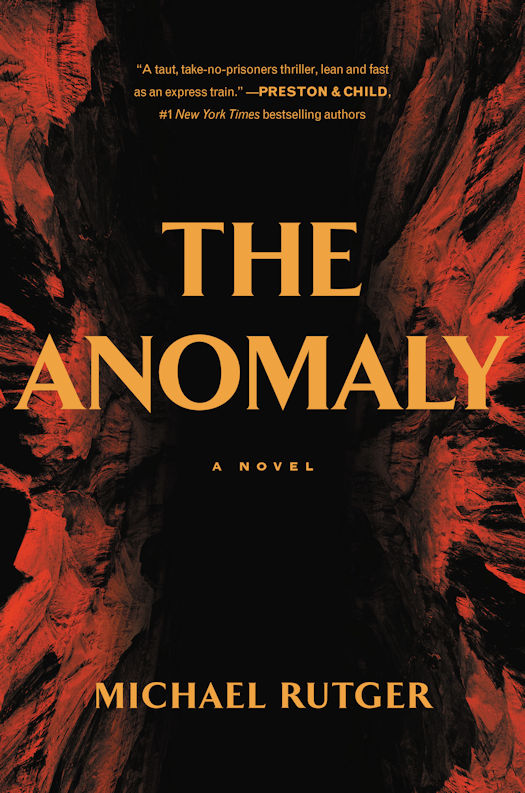 Not all secrets are meant to be found.

If Indiana Jones lived in the X-Files era, he might bear at least a passing resemblance to Nolan Moore — a rogue archaeologist hosting a documentary series derisively dismissed by the “real” experts, but beloved of conspiracy theorists.

Nolan sets out to retrace the steps of an explorer from 1909 who claimed to have discovered a mysterious cavern high up in the ancient rock of the Grand Canyon. And, for once, he may have actually found what he seeks. Then the trip takes a nasty turn, and the cave begins turning against them in mysterious ways.

Nolan’s story becomes one of survival against seemingly impossible odds. The only way out is to answer a series of intriguing questions: What is this strange cave? How has it remained hidden for so long? And what secret does it conceal that made its last visitors attempt to seal it forever?

Michael Rutger is a screenwriter whose work has been optioned by major Hollywood studios. He lives in California with his wife and son.