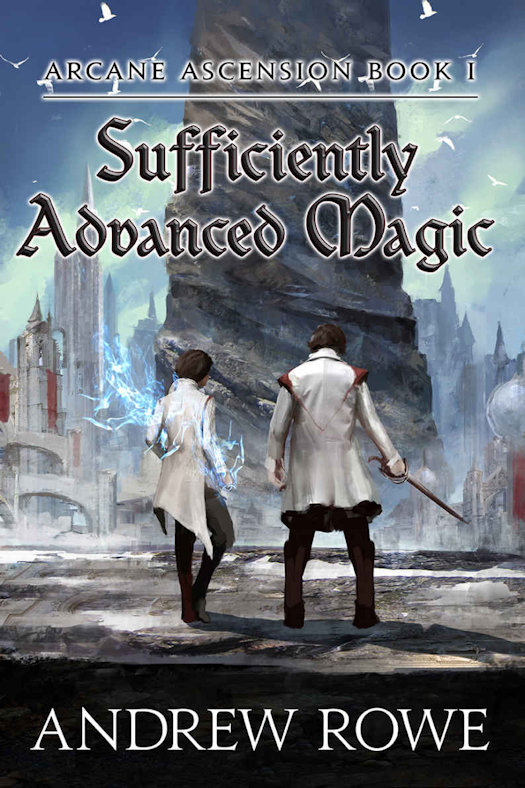 Five years ago, Corin Cadence’s brother entered the Serpent Spire — a colossal tower with ever-shifting rooms, traps, and monsters. Those who survive the spire’s trials return home with an attunement: a mark granting the bearer magical powers. According to legend, those few who reach the top of the tower will be granted a boon by the spire’s goddess.

Now, it’s Corin’s turn. He’s headed to the top floor, on a mission to meet the goddess.

If he can survive the trials, Corin will earn an attunement, but that won’t be sufficient to survive the dangers on the upper levels. For that, he’s going to need training, allies, and a lot of ingenuity.

The journey won’t be easy, but Corin won’t stop until he gets his brother back.

Sufficiently Advanced Magic by Andrew Rowe opens as the protagonist, Corin Cadence, mentally prepares himself to enter Serpent Spire on his Judgement Day. Since the giant tower is nothing more than a series of trials designed to judge a person's skills and abilities, Corin is understandably uneasy. These tests, designed by the goddess Selys, involve magical puzzles, dangerous monsters, and intricate traps. Failing isn't an option for Corin; he plans to exit the tower alive.

Along with the other youths that enter the Judgement Day gates, Corin is hoping to earn an attunement. These marks are said to be a sign of the goddess' blessing, and even more important, they give the bearer magical powers. Corin also has more personal motive; he hopes to discover information pertaining to his brother Tristan, who entered the Serpent Spire five years earlier but never returned.

The book's opening is fantastic. Corin's adventures in the Serpent Spire both excited and intrigued me. I loved the traps, puzzles, and the beings that Corin faced before earning his attunement. Author Andrew Rowe's introduction really brings his world, the tower, and its occupants to life. Which may explain why I was disappointed after Corin exits the tower and enters the Lorian Heights Academy of Arcane Arts.

Lorian Heights is a school of magic where the student body attends classes while working to improve their magical abilities. Becoming more powerful is a paramount goal for Corin who plans to eventually return to the tower to look for clues of his brother's whereabouts. Although the magic and its source in this world are vastly different, there are just too many parallels to Hogwarts School of Witchcraft and Wizardry to ignore. For instance, the professors at Lorian Heights, much like those at Hogwarts, are cryptic, often gruff, and very seldom helpful. Another similarity is Corin's group of friends, who much like Harry's, come from diverse backgrounds and are at their strongest when they are working together. Finally, Lorian Heights comes under attack by monsters on multiple occasions, reminiscent of events created by JK Rowling. For me, this middle portion of the story is unoriginal and lackluster.

One of my favorite parts of speculative fiction is character development. Corin Cadence is determined, enterprising and innovative. His major fault is the he is emotionally distant. Corin is very aware of this flaw and constantly worked on it throughout the story. He also invests a huge portion of his time on inventing and improving magical devices designed to boost the bearer's powers. This starts out interesting, but on both counts Rowe spends too much time on the details which become tedious. Much more likeable is Sera Cadence, Corin's half-sister. Her relation with Corin is near perfect and the peaks and valleys of their interactions are a highlight for me. I also really enjoyed her experience in the Survival Match battle arena.

No concrete spoilers, but in the finale, Rowe takes his characters back into the tower and the story once again shines.

Bottom line: Sufficiently Advanced Magic begins and ends on a high note, but the middle drags. Andrew Rose produces some amazing, adrenaline-filled action sequences, but the meat of the story is just too bland for my tastes.

I rate Sufficiently Advanced Magic as a solid 6.