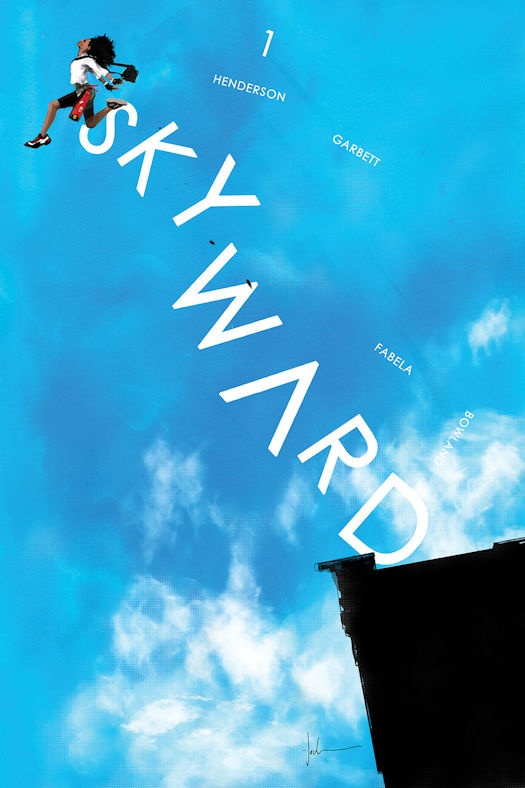 PORTLAND, OR, 04/26/2018 — Writer Joe Henderson (showrunner of Fox’s Lucifer) and artist Lee Garbett (Lucifer, Loki: Agent of Asgard) defy gravity with their hot new series launch SKYWARD. The first issue of the popular new series is being rushed back to print in order to keep up with customer demand and the 2nd printing cover will feature breathtaking artwork by Jock.

In SKYWARD, gravity on Earth suddenly becomes a fraction of what it is now. Twenty years later, humanity has adapted to its new low-gravity reality. For one Willa Fowler—a woman born just after the fateful “G-day”—life after gravity it pretty awesome. Until she accidentally stumbles into a dangerous plan to bring gravity back. A plan that could get her killed…

SKYWARD is an adventure-filled exploration of our world turned upside down and a young woman’s journey to find her place in it.

"Skyward is a great new series with a great hook and jaw-dropping artwork by Lee
Garbett. Highly recommended!" —Jeff Lemire

“This debut issue finds a way to tether readers to its high-flying story, and the issue
wraps with a bewildering cliffhanger that will leave you desperate for its next issue.” —ComicBook.com

“Exhilarating and unique... Garbett and Fabela provide some great artwork. This comic
earns a strong recommendation. Give it a read.” —Bleeding Cool

“A confidant debut issue that mixes strong characterization with beautiful work from
Lee Garbett and Antonio Fabela that gives the reader a strong indication of what this
new series is about.” —Multiversity Comics

“An immersive and entertaining read.” —Newsarama