Gear Celebrates A Milestone With A New Printing

Four incompetent cats hijack a giant killer robot to change the course of a war between cats, dogs, and insects. But while these three species fight for control of the world, a powerful mechanical being named GEAR arrives to risk his own life to save the lives of good cats.

“GEAR was the first graphic novel I ever made, and it’s why I fell in love with the medium,” said TenNapel. “Now with 17 graphic novels under my belt, I’ve yet to capture the raw energy of GEAR in another title. I was on fire back then, and GEAR is still on fire!”

“GEAR was the first of Doug's comic books I read, back when it was published in black and white,” said Garner. “I became a fan of his comic books because of it and never expected to be coloring them in.”

“Reading GEAR is like seeing Coconino County in George Herriman's Krazy Kat be
invaded by giant robots and bugs at war, written and drawn by Doug TenNapel in an
expressive and highly kinetic style. Basically, it is everything my teenage self wanted to
read in a comic.” —Kazu Kibuishi (Amulet)

“GEAR is pure energy and imagination on paper. I spent a lot of time reading this book
over and over trying to soak up all the inky goodness Doug put in.” —Skottie Young (I
HATE FAIRYLAND, Deadpool)

"TenNapel is a master of his craft, and his love of the medium is on full display here.
Doug plays with the comic page like a cat with so much yarn. GEAR is sheer delight."
—Rob Guillory (CHEW, FARMHAND) 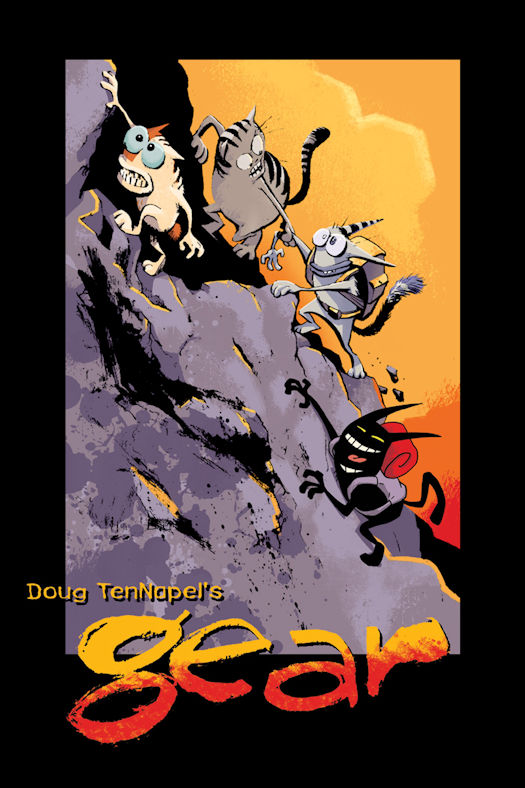 ABOUT IMAGE COMICS
Image Comics is a comic book and graphic novel publisher founded in 1992 by a collective of bestselling artists. Image has since gone on to become one of the largest comics publishers in the United States. Image currently has five partners: Robert Kirkman, Erik Larsen, Todd McFarlane, Marc Silvestri, and Jim Valentino. It consists of five major houses: Todd McFarlane Productions, Top Cow Productions, Shadowline Comics, Skybound Entertainment, and Image Central. Image publishes comics and graphic novels in nearly every genre, sub-genre, and style imaginable. It offers science fiction, fantasy, romance, horror, crime fiction, historical fiction, humor and more by the finest artists and writers working in the medium today. For more information, visit www.imagecomics.com.
Posted by Qwill at 8:02 AM