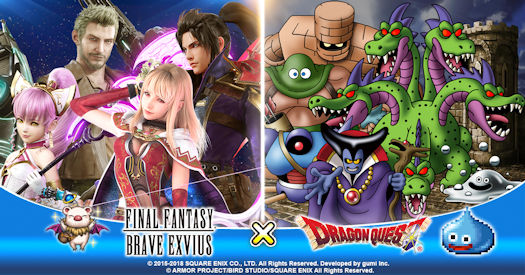 All players that launch the app during the event may dive into wave battle-type quests where consecutive groups of monsters can be fought for a limited period of time. DRAGON QUEST monsters Golem and Robbin’ ‘Ood can be found in regular battles, while formidable foes Dragonlord and Orochi will be classified as bosses. Medals earned from defeating these monsters in raids may be exchanged for Erdrick’s sword, among other famous equipment and items from the DRAGON QUEST series.

Players have the chance to obtain the Dragonlord, Liquid Metal Slime, Robbin’ ‘Ood, Golem, Killing Machine, and Orochi from rare summoning during the campaign period. Also, Slime units will be awarded to all participants as daily login bonuses throughout the campaign, with additional Slime units obtainable by trading medals earned during the event period.

FINAL FANTASY BRAVE EXVIUS is available as a free-to-play app (with in-app purchases) through the Apple App Store®, Google Play™ and on the Amazon Appstore™.

About DRAGON QUEST X I: Echoes of an Elusive Age

About gumi Inc.
Founded in 2007, gumi Inc. (Tokyo Stock Exchange: 3903) is a leading global mobile game publisher and developer headquartered in Japan, with overseas operations in France, Korea, Singapore, Taiwan and the United States. The company has proven success in launching titles worldwide, such as the widely popular role-playing games Brave Frontier and Phantom of the Kill. With ongoing publishing and development projects on various platforms, including iOS, Android, and more, gumi aims to change the world through innovative entertainment products and services, including both original content and collaborations with popular IP. For more information, please visit http://www.gu3.co.jp/en/home-en/ .