Please welcome Eric Barnes to The Qwillery. The City Where We Once Lived was published on April 3rd by Arcade Publishing. 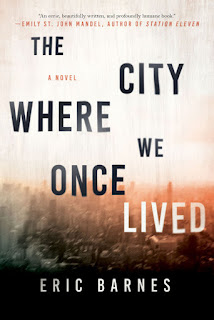 Eric:  Besides the fact that writing is the hardest work I've ever done (harder than construction, than working in a fish processing plant in Alaska, than laying off whole divisions of companies), and that the simple act of committing to the work of writing a book is just breathtaking, I'd say that the publishing process is the hardest part. You put in all that solitary work, finally get to the point you feel good about what you've done, then you're faced with the harsh but real realities of the business side of publishing.

Eric:  I tend to write my way into a book. I have an idea. I have a few sentences. I find a voice. I write forward, erratically, sometimes out of order, still trying to find the voice and some sort of rhythm. And then, after 50 to 75 pages, I'll stop and try to figure out a plot. Then I outline heavily, with great detail, and write to that outline, all the while varying from the outline I spent so much time refining.

Eric:  The most influential books now are The Road (Cormac McCarthy), White Noise (Don DeLillo), and For the Time Being (Annie Dillard). But Vonnegut remains so influential. And I'd have never started writing, I don't think, if I hadn't read Raymond Carver and Richard Ford, who wrote about the kind of people I grew up around, and which made me think, "Wait, I have stories to tell that people might want to read."

TQ:  Describe The City Where We Once Lived in 140 characters or less.

Eric:  A novel about a city that's been abandoned and the people who choose to live there. Think Detroit, or New Orleans after Katrina. Or NYC in the 70s.

TQ:  Tell us something about The City Where We Once Lived that is not found in the book description.

Eric:  That's a great question. It's a deeply quiet book.

TQ:  What inspired you to write The City Where We Once Lived?

Eric:  I have always been fascinated by the environmental and political decisions that lead to the harm or descruction of places, whethere it's small towns wrecked by big box retailers or cities in Eastern Europe polluted by coal plants or New Orleans left vulnerable by decades of inattention to the risks of a hurrican.

TQ:  What sort of research did you do for The City Where We Once Lived?

Eric:  Not much. I hate research. So I write about things I know about, have read about.

TQ:  Please tell us about the cover for The City Where We Once Lived.

Eric:  I love that cover. I had minimal input on it, and not in a bad way. The cover captures the vague, quiet, passively accepted madness of the city in the book.

TQ:  In The City Where We Once Lived who was the easiest character to write and why? The hardest and why?

Eric:  Easiest.... The Minister, because he's an innately hopeful person, who only lightly lets on to the many wounds he has.

Hardest.... The narrator, because the more I wrote, the more he became like me.

Eric:  I definitely don't think the book is part of the Cli-Fi genre, mostly because I didn't know such a thing existed. (Not that it's a bad thing. I just had no idea.)

I din't really mean to write about climate change. I wrote about a city that failed, for many reasons, environmental issues being part of that, but political decisions being just as important. Climate was originally meant to be a bit of an afterthought, backdrop to the way people lived.

But, climate took on a bigger meaning, definitely, as I wrote. It was the ultimate expression of the dismissiveness and disregard people had for the city. They thought, in other words, they could only abuse the city. In fact, they were abusing the world.

TQ:  Give us one or two of your favorite non-spoilery quotes from The City Where We Once Lived.

"At night, even covered by the many blankets on my couch, I hear a crash, thick and deep and distant, as another levee collapses to the north, the hiss of water rushing southward, the sound in the air echoing heavily, the water from the bay moving another few blocks toward me."

"I type quickly on the typewriter, the sounds loud and steady, and sometimes as I sit here alone in this office finishing my stories, for a moment I'll think it is the sound of the typewriter that I'm creating, not the words in the stories themselves."

Eric:  I'm happy to say that Arcade will be publishing a prequel to CITY, called ABOVE THE ETHER, to be published in spring 2019.


The City Where We Once Lived
Arcade Publishing, April 3, 2018
Hardcover and eBook, 244 pages 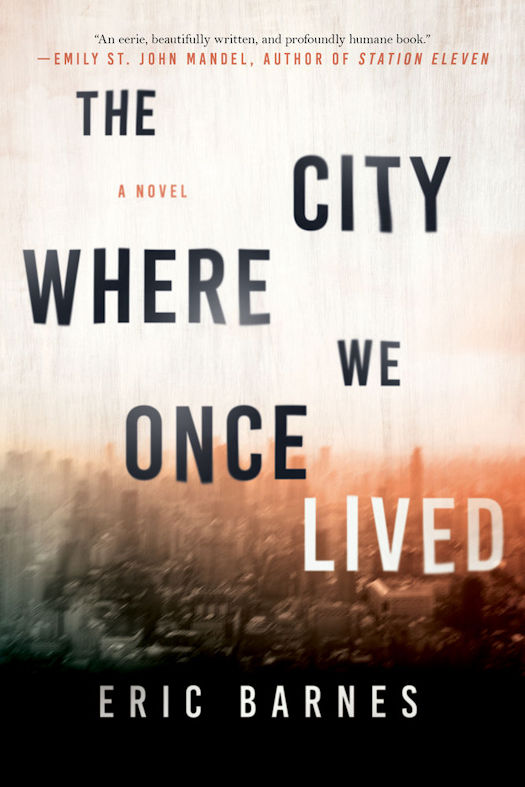 In a near future where climate change has severely affected weather and agriculture, the North End of an unnamed city has long been abandoned in favor of the neighboring South End. Aside from the scavengers steadily stripping the empty city to its bones, only a few thousand people remain, content to live quietly among the crumbling metropolis. Many, like the narrator, are there to try to escape the demons of their past. He spends his time observing and recording the decay around him, attempting to bury memories of what he has lost.

But it eventually becomes clear that things are unraveling elsewhere as well, as strangers, violent and desperate alike, begin to appear in the North End, spreading word of social and political deterioration in the South End and beyond. Faced with a growing disruption to his isolated life, the narrator discovers within himself a surprising need to resist losing the home he has created in this empty place. He and the rest of the citizens of the North End must choose whether to face outsiders as invaders or welcome them as neighbors.

The City Where We Once Lived is a haunting novel of the near future that combines a prescient look at how climate change and industrial flight will shape our world with a deeply personal story of one man running from his past. With glowing prose, Eric Barnes brings into sharp focus questions of how we come to call a place home and what is our capacity for violence when that home becomes threatened.

Eric Barnes is the author of two previous novels, Shimmer and Something Pretty, Something Beautiful. He has published more than forty short stories in Prairie Schooner, North American Review, the Literary Review, Best American Mystery Stories, and other publications. By day, he is publisher of newspapers in Memphis, Nashville, Knoxville, and Chattanooga that cover business, politics, the arts, and more. On Fridays, he hosts a news talk show on his local PBS station. He lives in Memphis, Tennessee.

Labels: Arcade Publishing, Eric Barnes, Interview, The City Where We Once Lived
Email ThisBlogThis!Share to TwitterShare to FacebookShare to Pinterest