The Answer is Always Giant Robots by Jeff Somers 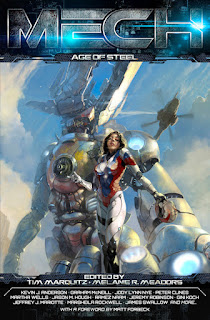 The Answer is Always Giant Robots
by Jeff Somers

Like most people, as a youth I ignored the advice to go into a field that might be of practical use and lucrative earning potential, preferring to play video games and write novels. This means I’m more or less entirely dependent on the folks who can actually do math for just about everything I need in life, leaving me free to be one of the least useful things on the planet: A futurist.

All sci-fi writers are in some sense futurists, of course; we’re paid (sort of) to imagine what the next five minutes, five years, or five centuries will be like. Which means that when I was approached by Ragnarok Publications to contribute a story to their Mech: Age of Steel anthology it was the perfect partnership, because Mech: Age of Steel is all about giant robots, and according to my research when it comes to questions about what the future will be like, the answer is always giant robots.

Death. This, in my opinion, isn’t getting nearly enough attention. As shocking as it is to discover that, say, Britney Spears is going to die someday, it is almost twice as alarming to discover that I might die someday. Luckily, the solution is pretty simple (at least according to all the comic books and cheap paperbacks I read as a kid): Pop our brains into giant robots, preferably robots with missiles mounted on the shoulders and jet engines in the feet. Or butt. I’m flexible on the placement of the jet engines.

War. Needless to say, if everyone was either given, assigned, or placed inside a giant robot that could fly and had missiles on its shoulders, war would quickly be a thing of the past, if only because so many people would be dead from vendettas, grudges, and drunken brawls within months of the robot bodies being handed out.

Dancing. I think all reasonable people can agree that watching other people dance is an affliction to the soul. This applies equally to your inebriated relatives at a wedding and the endless procession of “crews” on televised variety shows; every pop and lock just erodes our will to live. Luckily, however, dancing in enormous armored robot bodies is almost impossible. In an alternative future where not everyone gets a giant robot body, the rest of us can apply our shoulder missiles to eradicating dance crews everywhere.

Disease. Having your brain housed in a huge robot body means you eliminate the main vector for disease: Your disgusting biological body (and man, it is disgusting). If science can simply upload your brain to the robot, even better! Though the possibility then exists of a computer virus getting into your source code and assimilating you into a hive mind, but at least we will never have to deal with a runny nose ever again.

Parking. Every year the average adult spends about two years looking fruitlessly for parking spots in major urban areas. If we’re all just flying around as robots, we won’t need cars any more, or parking spots. Although there will be an increased risk of drunkenly crashing into buildings, plus all the associated destruction when we collide with each other in the air and riots break out, destroying entire downtowns in mecha-brawls. Well worth it, if you ask me, a man who once aged ten years seeking a parking spot after 6PM in Hoboken, New Jersey.

I could go on, but I think I’ve made my point: Very soon all of our problems will be solved via the liberal application of giant robots. Which makes Mech: Age of Steel a useful primer on what life will be like when this glorious future comes. Buy one copy for your crapulent current physical existence so you can read it in the bathroom, and buy a digital copy for easy uploading when you wake up to discover you’ve been upgraded overnight. 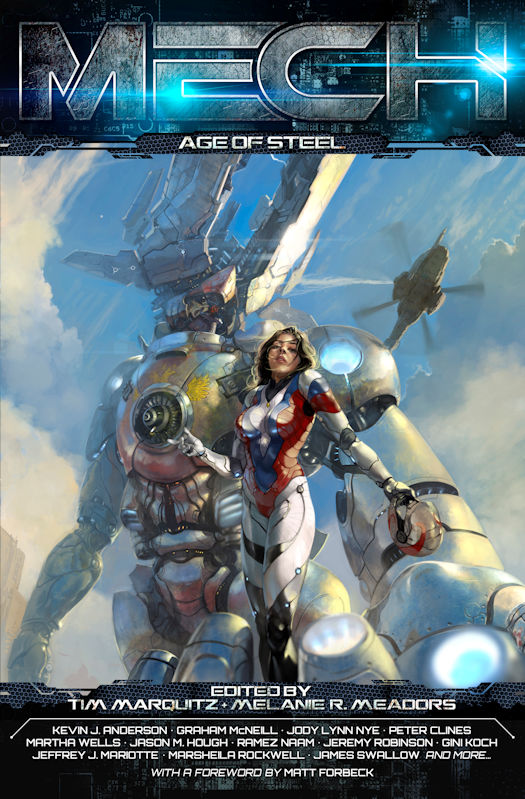 MECH: Age of Steel is a collection of 24 mecha-inspired short stories in the spirit of Pacific Rim, Macross, Transformers, Robotech, Gundam, Evangelion, and more.

The MECH: Age of Steel anthology features a vast array of tales showcasing giant human-piloted, robot war machines wreaking havoc in blasted cities, or on dystopian landscapes, or around space stations and asteroids against a cosmic backdrop, and more!

MECH is anchored by authors such as:
This anthology also features illustrations for every story and is the perfect companion to its sister title, Kaiju Rising: Age of Monsters. So strap in. Activate your interface array. And let's rock!

Jeff Somers (www.jeffreysomers.com) was first sighted in Jersey City, New Jersey after the destruction of a classified government installation in the early 1970s; the area in question is still too radioactive to go near. When asked about this, he will only say that he regrets nothing. He is the author of Lifers, the Avery Cates series from Orbit Books (avery-cates.com), Chum from Tyrus Books, and the Ustari Cycle from Pocket/Gallery, including We Are Not Good People (wearenotgoodpeople.com).

Jeff’s published over thirty short stories as well; his story “Sift, Almost Invisible, Through” appeared in the anthology Crimes by Moonlight, published by Berkley Hardcover and edited by Charlaine Harris and his story “Ringing the Changes” was selected for Best American Mystery Stories 2006. He survives on the nickels and quarters he regularly finds behind his ears, his guitar playing is a plague upon his household, and his lovely wife The Duchess is convinced he would wither and die if left to his own devices, but this is only half true.

Today, he makes beer money by writing amazing things for various people. Favorite whiskey: Glenmorangie 10 Year. Yes, it is acceptable to pay me in it.