Interview with Curtis Craddock, author of An Alchemy of Masques and Mirrors


Please welcome Curtis Craddock to The Qwillery as part of the of the 2017 Debut Author Challenge Interviews. An Alchemy of Masques and Mirrors was published on August 29th by Tor Books. 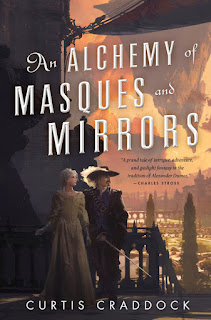 Curtis:  Thanks for having me. I started writing with the intent to be published about 30 years ago. Back before email was a thing. I am nothing if not persistent.

Curtis:  My writing process is best described as a thousand spastic frogs on an electrified trampoline. I begin with a clever plan for a story that gets derailed by all the nifty ideas I have while I’m actually writing it. These inspirations carom off each other and occasionally form patterns that look intentional, which I do my best to capture.

Curtis:  “The waiting is the hardest part.”—Tom Petty. Writing is the project of my life. It’s not supposed to end until I die, or even then if I can manage to leave behind a pile of unfinished manuscripts for someone else to obsess over. That having been said, I want to see my books in the world. I want people to read and enjoy them. On a purely selfish level, I want to know if I’m good enough appear on the big stage.

Curtis:  Reading. The house I grew up in was essentially a library with beds in it. When I was young enough not to need sleep, stayed up late reading. Also my father is a great storyteller when you can get him going. I loved Star Trek and Star Wars back when it was okay to love something without deconstructing it. These days, I’m influenced a great deal by the way science, politics, and religion shape people’s minds and behaviors.

TQ:  Describe An Alchemy of Masques and Mirrors in 140 characters or less.

Curtis:  A polymath princess and her faithful musketeer outwit assassins, conspirators, and an ancient madman to prevent a disastrous civil war.

TQ:  Tell us something about An Alchemy of Masques and Mirrors that is not found in the book description.

Curtis:  What counts as magic depends on your frame of reference. On the world of Caelum sorcery is a heritable trait, but nobody ever calls sorcery “magic.” From their point of view sorcery is a gift from their god. The word magic is reserved for strange or inexplicable occurrences. That man with the silver eyes stepping through the surface of a mirror is just a Glasswalker sorcerer, but a cow that inexplicably gets sick and dies might be under a magic curse.

TQ:  What inspired you to write An Alchemy of Masques and Mirrors? What appeals to you about writing a genre bending novel?

Curtis:  The first scene of the book came into my head almost fully formed. It was inspired by the real life-practices of the Louis the XIV of France, which I will not spoil for you here. I knew I wanted to write a story about Isabelle and Jean-Claude, a princess and a musketeer, that would do them credit while turning the tropes on their ears. For example, there are many stories about a young noblewoman running away from an arranged marriage, or being dragged into one against her will. Isabelle embraces the idea and runs with it. She’s going on an adventure, she’s going to get married to a prince, and she’s going to do math and science along the way. Jean-Claude, on the other hand, is a Musketeer with the soul of a con-artist. He much prefers talking to fighting and could sell a man his own boots.

As for being genre bending, I set the story in a period analogous to the first stirring of the Enlightenment in our world. It’s a time of rapid a frequently wrenching change, when people actually look to the future for inspiration instead of the past.

TQ:  Please tell us about the cover for An Alchemy of Masques and Mirrors.

Curtis:  The cover is by Thom Tenery of Star Wars: Rogue One and Oblivion fame. It’s an absolutely gorgeous cover depicting Isabelle and Jean-Claude. No particular scene from the book is portrayed but it’s very atmospheric and gives a good impression of the soaring continents from which the world is composed.

TQ:  In An Alchemy of Masques and Mirrors who was the easiest character to write and why? The hardest and why?

Curtis:  Jean-Claude is by far the easiest to write, most days. He’s a stage manager in the theater of life and sees the world from behind the curtain. The hardest to write was Julio, because he’s on stage for a relatively short period of time. He’s much more opaque to me than the other characters.

TQ:  Which question about An Alchemy of Masques and Mirrors do you wish someone would ask? Ask it and answer it!

Curtis:  Q: So is this just another save the kingdom and restore the monarchy story, or do you have something else in mind?

A: Actually it’s specifically not a put-things-back-the-way-they-were story. If the Risen Kingdoms stories go on long enough, they’ll be about the transformation of kingdoms into nations, subjects into citizens. The changes are incremental and largely adaptive, but they have no end point.

TQ:  Give us one or two of your favorite non-spoilery quotes from An Alchemy of Masques and Mirrors.

Jean- Claude said, “A word of advice, friend. The next time somebody offers you money to kill a King’s Own Musketeer, turn it down.”

“I serve l’Empire Céleste. In my youth, I served myself and thought that l’Empire did too, but that is foolish. A man must die, but an empire can go on forever.”

Curtis:  I just turned book two of the Risen Kingdoms into my editor, and now I’m working on book three. After that I have Ideas for a weird Western and a Hard SF standalone. Of course, if people want more Risen Kingdoms I will oblige. The world of Caelum is big and old and strange.

Curtis:  Thank you for having me.


An Alchemy of Masques and Mirrors
The Risen Kingdoms 1
Tor Books, August 29, 2017
Hardcover and eBook, 416 pages 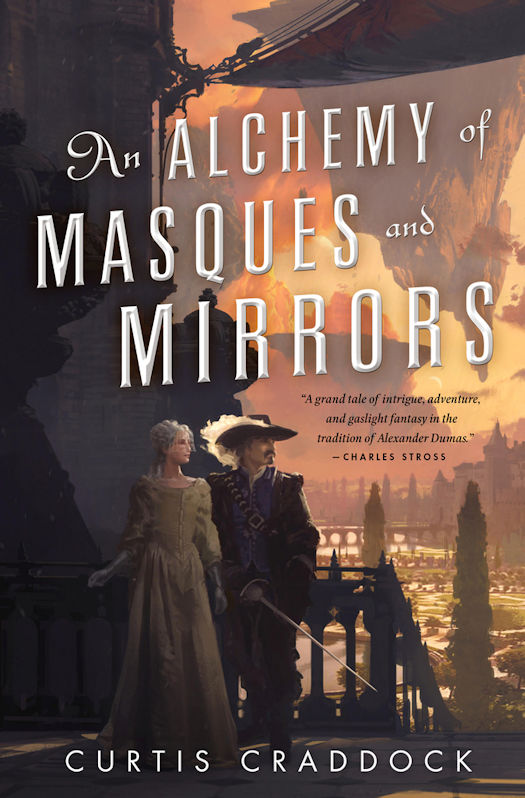 A delightful and engrossing fantasy debut featuring an intelligent heroine and her guardian, a royal musketeer.

In a world of soaring continents and bottomless skies, where a burgeoning new science lifts skyships into the cloud-strewn heights, and ancient blood-borne sorceries cling to a fading glory, Princess Isabelle des Zephyrs is about to be married to a man she has barely heard of, the second son of a dying king in an empire collapsing into civil war.

Born without the sorcery that is her birthright but with a perspicacious intellect, Isabelle believes her marriage will stave off disastrous conflict and bring her opportunity and influence. But the last two women betrothed to this prince were murdered, and a sorcerer-assassin is bent on making Isabelle the third. Aided and defended by her loyal musketeer, Jean-Claude, Isabelle plunges into a great maze of prophecy, intrigue, and betrayal, where everyone wears masks of glamour and lies. Step by dangerous step, she unravels the lies of her enemies and discovers a truth more perilous than any deception.

Curtis Craddock lives in Sterling, CO where he teaches English to inmates in a state penitentiary. An Alchemy of Masques and Mirrors is his first book.