Review: The Legion of Flame by Anthony Ryan 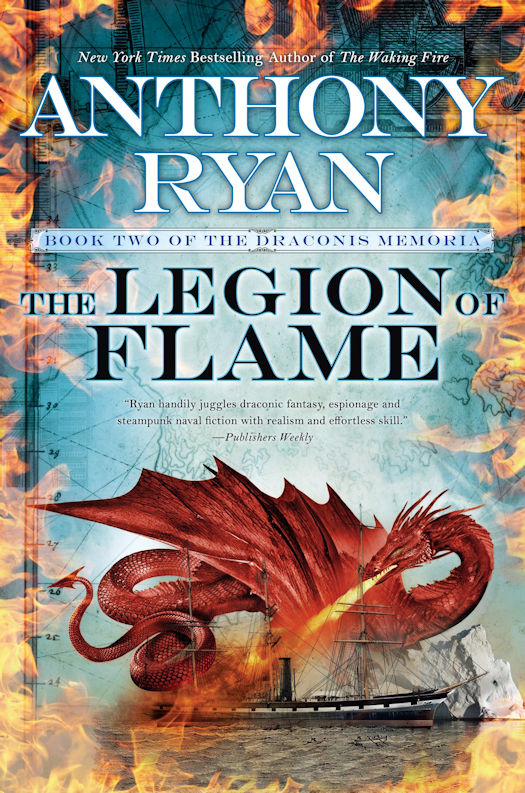 Empires clash and a fell power stakes its claim in the second in a new series from the New York Times bestselling author of the Raven’s Shadow Trilogy.

For centuries, the vast Ironship Trading Syndicate relied on drake blood—and the extraordinary powers it confers to those known as the Blood-blessed—to fuel and protect its empire. But now, a fearsome power has arisen—a drake so mighty that the world will tremble before it.

Rogue Blood-blessed Claydon Torcreek, Syndicate agent Lizanne Lethridge, and ironship captain Corrick Hilemore embark upon perilous quests to chase down clues that offer faint hopes of salvation. As the world burns around them, and the fires of revolution are ignited, these few are the last hope for the empire and for all of civilization.

The Legion of Flame, the second book in the Draconis Memoria series, picks up in the aftermath of the destruction wreaked upon the people of the Corvantine Empire by the ruthless White Drake and its army of lesser drakes and Spoiled humans. Unlike its kin, this legendary dragon is enormously powerful and has the ability to transform the humans it takes as captives into slaves by compelling them to stare into mysterious crystals. The slaves, called the Spoiled, remain humanoid in appearance but their yellow eyes and the scaled ridges on their faces make their presence easy to identify. The White is able to command the Spoiled nonverbally, and although a portion of their individuality remains, they are largely a collective mind. As the Spoiled army systematically wipes out settlement after settlement, it also amasses more recruits. Their assimilation results in shared knowledge and abilities that the White plans to use to for its goal of permanently subjugating humankind.

In this action-packed, quest-driven sequel to The Waking Fire, author Anthony Ryan focuses each chapter on the exploits of one of the four main characters. Each POV storyline successfully navigates the balance of adrenaline-filled action with eye-opening exposition. Sirus, a new POV character, gives the reader the opportunity to understand the mutated Spoiled's perspective. Sirus' quick intellect and ability to lead make him a valuable asset. And although he is filled with self-loathing, he is consistent and very successful in furthering the White's plans. Sirus' chapters were the most difficult for me to read. It was unsettling to watch him devise ingenious methods to kill and capture humans. But although it was uncomfortable, I also found it illuminating and fascinating. Through Sirus, Ryan is able to share the very alien nature of the drakes and the White in particular, in a very natural and uncontrived setting.

Corrick Hilemore and Clay Torcreek set sail to the frigid southern isles with the purpose of discovering the true nature of their enemy and perhaps a means to destroy it. Although Hilemore and Clay begin their journey together, they soon become separated, which leads both protagonists through harrowing experiences. Though Hilemore has an important role to play, it is Clay that provides the back-story of the White's origins. Similar to The Waking Fire, Hilemore is relegated to the position of secondary character and although he is extremely earnest and likeable, I'm beginning to wonder if his sole purpose is to fill in some of the series' blanks. Clay's travels are much more vital and quickly take an unexpected turn. His subterranean passage is especially exhilarating and extremely informative.

Lizanne Lethridge and her mission engaged me the most. Seeking a fabled weapons inventor, she must infiltrate the virtually impenetrable prison city of Scorazin. Lizanne's skill set as a spy and assassin are sorely tested in a fortress city whose only inhabitants are hardened criminals. Most admirably, Lizanne never quits no matter how many obstacles are thrown in her path or how many detours she is forced to endure. Hands down my favorite character, her foray in Scorazin and her interactions with its denizens kept me turning pages late into the night.

Always impeccable, Anthony Ryan's world building skills do not fail to amaze. In the Draconis Memoria series, he completely immerses his readers in a steampunk-esque world where the struggle for survival is palpable against an emerging army of ferocious drakes. I especially appreciated the premise of short-sightedness by the power-hungry. Mirroring current world events, this theme is resoundingly appropriate.

The Legion of Flame pits human perseverance and ingenuity against the brute force and intellect of a race vying for its own place in history. Pure and simple, it is brilliant story-telling. This series is top notch and not to be missed.