Please welcome Rick Claypool to The Qwillery as part of the of the 2017 Debut Author Challenge Interviews. Leech Girl Lives is published on September 26th by Spaceboy Books. 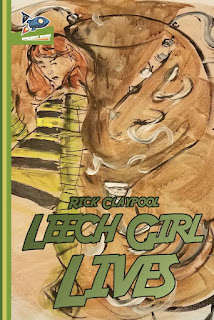 Rick:  As a kid I spent a lot of time being bored at my grandparents’ house, so I occupied myself drawing cartoons, writing manuals for video games I made up, or stapling together drawings of dinosaurs or made-up creatures to make “books.” At the time I didn’t think of any of this as “writing” but that’s pretty much what it was. I didn’t do much in the way of creating actual narratives -- you know, stories with a beginning, a middle, and an end -- unless I was told to do so for school. That came much later.

Rick:  Hybrid. I need to sketch things out in advance in order to make any kind of progress, but when I hunker down and start actually writing, the story almost inevitably veers off in unintended and surprising ways. Sometimes these unexpected offshoots are dead ends and sometimes they are way better than what I originally planned. The best of these, the ones that both work and take the story in unexpected directions, are the most thrilling part of the creative process for me.

Rick:  Not crashing my car when I have an idea and I try to write it down while simultaneously driving on the Turnpike.

Rick:  I love the maximalist worldbuilding and political conscience of science fiction authors like Ursula K. Le Guin, China Mieville and Madeleine L’Engle and I love the everyday absurdism captured by minimalist millennial authors like Sam Pink, Juliet Escoria, and Noah Cicero. In Leech Girl Lives, I try to bring these influences together to make a kind of offbeat minimalist sci-fi.

Of course it wasn’t just books that influenced me. TV shows like Adventure Time and Doctor Who have inspired me basically not to hold back my weirdest, craziest ideas, and the dystopia/utopia I invented no doubt owes a lot to Terry Gilliam’s Brazil and 12 Monkeys.

Rick:  This book is hard to succinctly summarize but here’s an attempt in exactly 140 characters:

TQ:  Tell us something about Leech Girl Lives that is not found in the book description.

Rick:  In the Bublinaplex, the distant-future utopia where the story takes place, society is centered around making art (because humanity’s survival is attributed to creativity) and safety (because the city contains the last remaining human population, so everyone’s life is extremely precious). A newly popular art movement, reckessism, threatens to disrupt the utopia, as its adherents (recklessists) defy the society’s emphasis on safety by making art that is designed to physically harm its audience. Lorcan Warhol, the de facto leader of this movement, is the arch nemesis of the story’s protagonist, Margo Chicago, an art safety inspector.

TQ:  What inspired you to write Leech Girl Lives? What appeals to you about writing Science Fiction?

Rick:  It’s the result of a mishmash of many inspirations. This is going to sound very serious for a book that on the surface might seem somewhat silly and escapist, but global inequality and exploitation as facilitated by unfair trade agreements and corporate supply chains was my initial inspiration. I set out to write a story where people who live in a rather blissful utopian future rely on the brutal exploitation of the people of the past in the same way that, in real life, people in rich countries like the U.S. rely on products made possible through the brutal exploitation of people in the Global South. My challenge for myself was to write a book that is something of a zany escapist sci-fi romp that simultaneously engages with this and other deadly serious issues.

In high school, I read E.M. Forster’s “The Machine Stops,” a science fiction story from 1909, before science fiction was a thing, and it literally changed my life. In a way, I write science fiction because I hope my writing could affect others the way that story affected me.

TQ:  What sort of research did you do for Leech Girl Lives?

Rick:  To be honest, not very much. One exception that stands out is that a major plot point depends on there being a credible way to force a tardigrade -- an odd, nearly indestructible kind of micro-creature that dwells in moss and mud basically everywhere in the world -- into its “tun” or dormant state. I had to peruse Google Scholar a bit before I found a paper that made what happens in the book with a stampede of kaiju-sized tardigrades seem not so scientifically wrong that it would bother me.

TQ:  Please tell us about the cover for Leech Girl Lives?

Rick:  The cover depicts the beginning of a somewhat Nausicaa-inspired scene where Margo gets quite close to one of these massive tardigrades.

TQ:  In Leech Girl Lives who was the easiest character to write and why? The hardest and why?

Rick:  I’ll respond in reverse. Margo was the hardest, since it is her perspective that the reader follows for practically the entire book. In order to maintain a consistent character, perspective, and voice for her for the duration of the novel during the years-long process of writing it, I essentially had to trick myself into thinking of her as a real person that I know, and I had to suppress the idea that she is just this artificial and in some ways arbitrary assemblage of traits and ideas that come from within me.

The easiest character to write was Lorcan Warhol. He’s malicious and flamboyant, like Tim Curry as Dr. Frankenfurter, and he loves to hear himself speak. I had a lot of fun writing him, as I think readers probably will be able to tell.

Rick:  There’s no such thing as a novel that doesn’t include social issues. Sure, I made an effort to keep most of the politics as subtext rather than text in Leech Girl Lives. I’ll sum it up this way: At its core the book is against exploitation and ignorance and cynicsm and complacency and it is for fighting for what you believe in and confronting unfairness and choosing to be on the right side of history.

TQ:  Which question about Leech Girl Lives do you wish someone would ask? Ask it and answer it!

RC:  How did you balance writing the book with all the other things going on in your life?

I work full time, I like spending time with my wife, and I have a four-year-old. It’s not easy. The biggest advantage I’ve been blessed with is that I work from home. When I started writing the book, before my son was born, I made a conscious effort to use the time I would have spent commuting in order to do it. So for about an hour every day I churned out about 300 or so, and I forced myself to always move forward with the draft, to not go back and revise anything, and in about a year those words added up to the sprawling, incoherent 500-page mess that was my first draft. By the time my son was born a few years later I was doing final revisions. I had no interest in using the book to cop out of my parenting responsibilities (and I don’t think my wife would have put up with it for a second if I did, and rightly so). Finding time to write is much harder now that I have to schlep the boy to daycare, but I still manage to chip away at smaller projects.

TQ:  Give us one or two of your favorite non-spoilery quotes from Leech Girl Lives.

Rick:  Here’s a particularly fun paragraph from the middle of the book:

“The balloon leered at Margo. It spoke, and as it spoke its eyes sunk back into its skull and its teeth stood up on its gums and the teeth performed a nightmarish dance on the thing’s forked tongue to a rhythmic bleating that blared out of its nostrils.”

Rick:  I’m working on a post-apocalyptic, Lovecraftian piece that is either a very long short story or a very short novelette that’s inspired by Wall Street’s influence on our society.

Rick:  Thank you for your excellent questions. 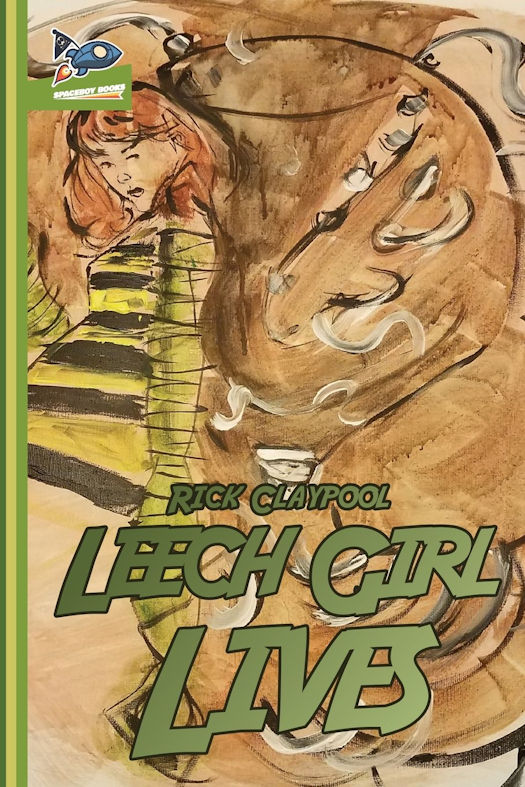 “I used to live in the future. Giant leeches ate my arms and then replaced them. Under the circumstances, this was actually a good thing. Anyway now I’m here and I’m looking for someone else from the future.”

Inspector Margo Chicago is the smartest, surliest art safety inspector in the Bublinaplex, and things aren’t going her way. The guy she thinks she’s in love with has been banished. Her boss has been poisoned. Her cyborg has a limp.

Oh, and her arms have been devoured and replaced by a pair of enormous leeches. As if that isn’t enough, it’s now up to Margo to save the Bublinaplex from art terrorists whose newest installation could drive humanity to extinction.

But things in the Bublinaplex are not as they seem. And when Margo uncovers the city’s murderous secrets, she must face a choice: Should she save the Bublinaplex? Or should she join the revolution dedicated to destroying it? 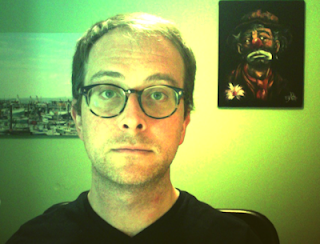 Rick Claypool is a writer and activist who lives in Pittsburgh. He works for Public Citizen, a nonprofit organization that fights corporate power. He has a master's degree in popular culture from Bowling Green State University. He grew up in a small town in western Pennsylvania called Leechburg. Leech Girl Lives is his first novel.