Interview with Adrian J. Walker, author of The End of the World Running Club


Please welcome Adrian J. Walker to The Qwillery as part of the of the 2017 Debut Author Challenge Interviews. The End of the World Running Club is published on September 5th by Sourcebooks Landmark. 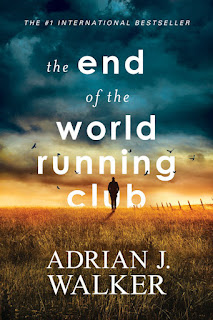 Adrian:  I started writing poetry when I was 8 years old and carried on through my teens. (Trust me when I say you do not want to read the results.) Then I discovered Douglas Adams, Stephen King, Tom Robbins, Glen Duncan, Zadie Smith…and realised that I wanted to write a novel. I had several false starts, including a month in my twenties holed up on a deserted beach in New Zealand, and it took me till my 30s before I completed my first book (From the Storm).

Adrian:  I’ve tried both and I definitely prefer plotting. For my next book I’ve written scene cards, which I spread out on the kitchen table so I can see the story end to end.

That said, sometimes you have to go off the beaten track a little, which is why I ‘pants’ dialogue. If your characters are strong then their interaction can often lead you down unexpected and useful roads. The screenwriter John Logan tells a great story about how he wrote one of the pivotal scenes in Gladiator. Look it up!

Adrian:  Resisting the urge to describe too much. The more a reader has to create the scene in her head, the more vivid it will be. The trick is to provide the right pointers; you’re really just showing her around her own imagination.

Adrian:  My fears inspire me, and every one of my books contains at least one scene which I’ve dreamed. I read a lot of non-fiction books too, so I generally write about what I’m obsessed with. Right now I’m reading ‘To Be A Machine’ by Mark O’Connell, which is about Transhumanism.

TQ:  Describe The End of the World Running Club in 140 characters or less.

Adrian:  Overwhelmed and underwhelming father runs 500 miles across a post-apocalyptic UK to reach his family before they’re evacuated for good!

TQ:  Tell us something about The End of the World Running Club that is not found in the book description.

Adrian:  I cried a bit when I wrote the ending. You’ll either love it or hate it.

TQ:  What inspired you to write The End of the World Running Club? What appealed to you about writing a post-apocalyptic thriller?

Adrian:  I have wanted to write a book set in a post-apocalyptic world ever since reading Lucifer’s Hammer (Jerry Pournelle and Larry Niven) as a teenager. What appeals to me about PA is the idea of emptiness, not just physically but socially. Removing all the constructs we’re used to in the 21st century allows you to explore characters in interesting ways.

It was running and fatherhood (both of which I had just found when I wrote the book) which inspired me to write Running Club. I wanted to superimpose the journey of somebody learning to run, and to be a parent, onto this empty world.

TQ:  What sort of research did you do for The End of the World Running Club?

Adrian:  Apart from my own experiences, (I’ve run a couple of marathons but never more than that) I interviewed a number of ultra-distance runners. They’re an extremely interesting bunch with lots to say on the subject, and the most interesting answers were about the psychological effects of running very long distances, which I explore in the book.

TQ:  Please tell us about the cover for The End of the World Running Club.

Adrian:  I spend way too much time thinking about covers! The US one is radically different to the UK version, which is almost pure typography. This in turn is even more different to my original cover (more cryptic), back when I self-published the book in 2014. The US cover depicts Ed walking (or running) into a doom-laden sky and a red horizon, with crows circling him. I love how the colours pop.

TQ:  In The End of the World Running Club who was the easiest character to write and why? The hardest and why?

Adrian:  The easiest character to write was Jacob, a cameo of a friend of mine named Tobias. But Ed was easy too, since he’s a caricature of what was my darker side at the time. Grimes was hard. She’s the group’s protector, but I didn’t want her to just be a stereotypical tough soldier. She has her own vulnerability and history too.

Adrian:  I’m not sure I explore too many social issues, other than how I imagine various types of society would function after an apocalyptic event (Edinburgh’s underground warrens, a Manchester housing scheme, a stately home, a boating community on the south coast). The story is really about Ed’s own personal journey.

TQ:  Which question about The End of the World Running Club do you wish someone would ask? Ask it and answer it!

Adrian:  Why do you mention a particular song near the end of the book?

Because it’s my favourite song to run to by my favourite band in the world, and I wanted to give it as a gift in the last scene. The lead singer of the band died earlier this year, so it’s even more relevant to me now.

TQ:  Give us one or two of your favorite non-spoilery quotes from The End of the World Running Club.

‘Belief’s are strange. Things of certainty about things uncertain.’ (Ed)

‘We’re all born screaming, Ed. The moment we pop out our throats open and the same scream bursts out that always has done. We see all the lights and faces and the shadows and the strange sounds and we scream. Life screams and we scream back at it.’ (Harvey)

‘I feel like I’m running through a fart.’ (Bryce)

‘Do I believe in God? I still don’t know. Did I meet him in the canyon? Yes.
Absolutely yes.’ (Ed)

Adrian:  My next book, THE LAST DOG ON EARTH, has just been published in the UK and (fingers crossed) it will make its appearance in the US before long. I’m currently completing my next book for Penguin Random House, after which I’m planning to write WORDS, the second book in my self-published EARTH INCORPORATED trilogy. I also have another title called THE OTHER LIVES coming out in a few months time. Lots of books! 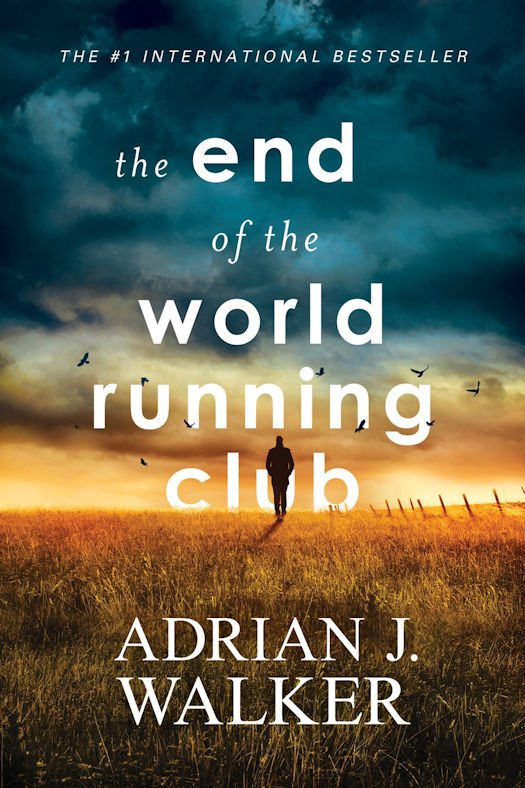 "A fresh and frighteningly real take on what "the end" might be…quite an exciting and nerve-wracking 'run', with characters you believe in and feel for."—New York Times bestselling author Robert McCammon

Perfect for fans of The Martian, this powerful post-apocalyptic thriller pits reluctant father Edgar Hill in a race against time to get back to his wife and children. When the sky begins to fall and he finds himself alone, his best hope is to run – or risk losing what he loves forever.

When the world ends and you find yourself forsaken, every second counts.

No one knows this more than Edgar Hill. Stranded on the other side of the country from his wife and children, Ed must push himself across a devastated wasteland to get back to them. With the clock ticking and hundreds of miles between them, his best hope is to run — or risk losing what he loves forever. 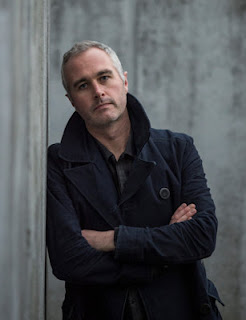 Adrian J. Walker was born in the bush suburbs of Sydney, Australia, in the mid-’70s. After his father found a camper van in a ditch, he moved his family back to the UK, where Adrian was raised. Visit him at www.adrianjwalker.com.