BUZZ FUELS DEMAND FOR GASOLINA,
DEBUT SENT BACK TO PRINT


“A gritty and gruesome tale you’ll be hooked on.” —Geek.com

PORTLAND, OR, 09/20/2017 — Image Comics/Skybound Entertainment is pleased to announce that GASOLINA #1—by creators Sean Mackiewicz and Niko Walter with colorist Mat Lopes and letterer Rus Wooton—will be rushed back to print in order to keep up with customer demand.

Fans of Robert Kirkman and Charlie Adlard’s THE WALKING DEAD in search of a new horror/adventure series to jump onto burned through GASOLINA #1.

“Retailer support for Gasolina #1 has been tremendous, and thanks to all the readers riding shotgun with Amalia and Randy. Their lives are about to become a full-blown horror movie,” said Mackiewicz. “Next issue: fast cars, danger, fire and knives!”

Set south of the border, GASOLINA #1 follows newlywed fugitives Amalia and Randy on their journey south from El Norte. They have played many roles in order to survive, but now, they must become unlikely leaders in the fight against a new cartel who uses inhuman tactics to ignite the most monstrous war Mexico—and the world—has ever seen. 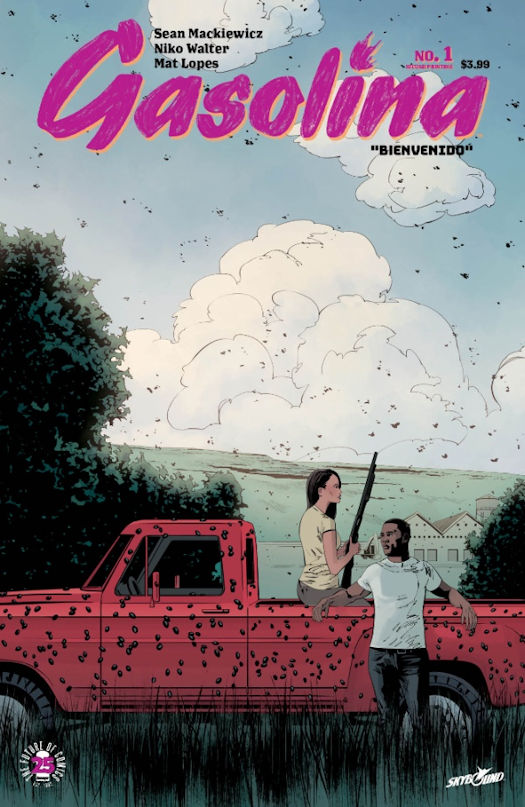 
ABOUT SKYBOUND ENTERTAINMENT
Founded in 2010, Skybound Entertainment is a multiplatform entertainment company specializing in television, comics, film, digital content, interactive, gaming, and merchandise. The company is led by The Walking Dead creator Robert Kirkman and his longtime producing and business partner David Alpert.
Posted by Qwill at 7:53 AM