Please welcome James Bradley to The Qwillery as part of the of the 2017 Debut Author Challenge Interviews. Clade is published on September 5th by Titan Books. 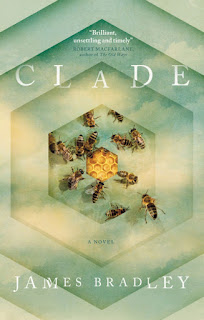 James:  Most writers I know always wrote, but although I was always a great reader it never occurred to me to write until I was in my early 20s. I suppose that was partly because I grew up without knowing anybody who write, and in a place and a time where it always seemed like books and writers came from somewhere else. And then, one day, I read and loved Michael Ondaatje’s novel, In the Skin of a Lion, and was incredibly struck by the way it said so many things I’d always thought and felt but not realised other people felt and thought. That made me wonder whether perhaps I might be able to write something that captured some of the things that struck me about the world, and what it was like being in it, and over the next few months I started writing poetry, and later I began trying to write fiction that took some of the intensity of feeling and compression you get in poetry into stories, and eventually novels.

James: I think most writers are a combination of the two, but I’m basically a pantser. I tend to have a general idea of the structural shape of what I’m writing, and a few scenes and probably a feeling I’m trying to capture, but what always matters most to me is voice and rhythm, so I tend to piece the books together almost like poems or music. In some ways that’s even more the case now I have kids, and I tend to be writing in short bursts rather than sustained blocks of time, but having kids (and getting older!) has also made me a lot more disciplined and focussed, so I’m more efficient in my inefficiency these days (or at least that’s what I tell myself!).

James: So many things! I hate the feeling I’m repeating myself, or I’ve said something before, which means that although I think there are a number of unifying interests I tend to write a completely different kind of book each time. But I also need to feel a book matters, in some deep sense, or that it’s getting at something real or true. One of the great things about writing Clade was knowing it did matter in that way: not only is it about a series of questions about climate change and Nature and the future I care about very much, it’s focussed on a series of questions about family and kids and love and all the complexities of that which feel very alive to me at the moment.

James: My writing is influenced by a number of things. I’m fascinated by animals and the natural world, and the ways we think and don’t think about them. But I also love the sorts of things you can do with science fiction and the literatures of fantastic, and the toolbox they give you to talk about time and the uncanny, and in both Clade and a number of other things I’ve written in recent years I’ve tried to find ways of bringing those two things together.

TQ:  What inspired you to write Clade? What appeals to you about writing SF and particularly apocalyptic SF?

James: I don’t think it’s accidental there’s so much apocalyptic and dystopian fiction around at the moment. We live in a moment in which a whole lot of things that were once certain are coming apart or ending, and apocalyptic and dystopian fiction has always been one of the things we use to contain and explore the anxieties that kind of change induces. But I think we need to be a bit wary of that impulse as well, because imagining the apocalypse is also a way of saving ourselves from having to ask hard questions about what we do if the world doesn’t end: as Frederic Jameson famously said, it’s easier to imagine the end of the world than the end of capitalism. One of the beauties of science fiction – and one of the reasons it appeals to me – is that it gives us a toolbox with which to think about the future, and to imagine alternatives. And that mattered when I was writing Clade, because one of the things I wanted to do was to resist that kind of apocalyptic thinking, and use the idea we might have a future to create a space in which it was possible to see that history is long, the future isn’t set, and although there are some things we can’t change about what happens in coming decades, there are things we can change if we choose to.

TQ:  Please tell us about the title.

James: Clade is the scientific term for a group of organisms with a common ancestor and comes from the Greek word klados, or branch. I chose it because it describes the structure of the book, but also because I love the way the word itself is simultaneously so sleek and futuristic, but also echoes “glade”, so has all those associations of sacredness and beauty it has. I hope the book has some of that same combination of qualities.

TQ:  What sort of research did you do for Clade?

James: Most of what happens in the novel is drawn from the scientific literature, or at least extrapolated from it, although I assumed sea levels would rise faster than they were predicted to when I wrote the novel. The scary thing was that while I was writing it, many of the things that happen in the book that were supposed to be decades in the future or – in one case – were pure science fiction, started to happen. That process has only accelerated since I finished the book. The permafrost is melting, the icecaps are beginning to collapse, sea level rises that were speculative five years ago now look likely by the end or even the middle of the century. That feeling reality is outpacing fiction is completely vertiginous, and frankly, terrifying.

TQ:  Please tell us about the cover for Clade.

James: The cover was designed by Adam Laszczuk, who is one of the designers at Penguin in Australia. I love it, but I also think it’s an incredibly clever cover, because it manages to simultaneously suggest the geological and the biological, and to capture the way the book is poised between the scientific and the natural.

TQ:  In Clade who was the easiest character to write and why? The hardest and why?

James: I suspect the easiest to write was Dylan, who appears in one of the later stories, perhaps because the world he was in – a post-pandemic one – was so intriguing and because I found his work building recreations of the dead so interesting. And I’m not sure he was the hardest, but the one I worried most about getting right was Noah, not just because he’s on the spectrum, and his experience of the world is very different to my own, but because I came to care about him terribly while I was writing the book. It was incredibly important to me he be a person with his own unique and meaningful perspective, that he grew up and found a path through life that mattered to him.

TQ:  Which question about Clade do you wish someone would ask? Ask it and answer it!

James: I don’t know! Perhaps something about the way the book explores the increasing blurriness of the boundary between the real and the virtual, and the way the virtual becomes a repository of what has been lost as the natural (and then the human) world becomes more and more denuded.

TQ:  Give us one or two of your favorite non-spoilery quotes from Clade.

“There was a time when people talked about boiling the frog, arguing that the warming of the planet was too gradual to galvanise effective action, and although in recent years that has changed, delay have been replaced by panic, resistance by calls for more effective solutions, Adam still suspects that at some level people do not understand the scale of the transformation that is overtaking them. Even if it hasn’t happened yet, the reality is that this place is already lost, that some time soon the ocean will have it back, the planet will overwhelm it.”

James: I’m just finishing the editing on the second volume of a series of young adult novels about alien spores that invade Earth’s biology, which have been great fun to write, but I’m also working on a new adult novel I’m really excited about and a non-fiction book about the ocean. 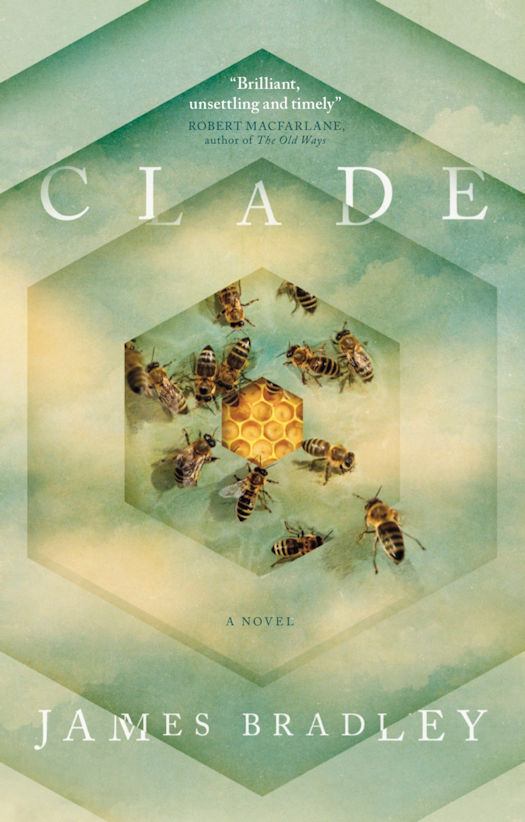 On a beach in Antarctica, scientist Adam Leith marks the passage of the summer solstice. Back in Sydney his partner Ellie waits for the results of her latest round of IVF treatment.

That result, when it comes, will change both their lives and propel them into a future neither could have predicted. In a collapsing England, Adam will battle to survive an apocalyptic storm. Against a backdrop of growing civil unrest at home, Ellie will discover a strange affinity with beekeeping. In the aftermath of a pandemic, a young man finds solace in building virtual recreations of the dead. And new connections will be formed from the most unlikely beginnings.

James Bradley is a novelist and critic. His books include the novels Wrack, The Deep Field, The Resurrectionist and most recently Clade, a book of poetry, Paper Nautilus and The Penguin Book of the Ocean. The Resurrectionist, a literary gothic horror, became a bestseller after being recommended by the Richard and Judy Book Club. He lives in Sydney, Australia.