The Eternal Empress has waged war against the countries of Saia for over 100 years, and now her sights are set on the last country standing. But within the brutal Empire’s workforce, a young man and woman discover they share a synergistic power that could change the fate of the entire
world.

“We’re very excited to have ETERNAL EMPIRE, VOL. 1 in stores,” said Luna and Vaughn. “We love this story about destiny, synergy, dragons, and rare magic, and we hope everyone enjoys it!”

It will be available in bookstores Tuesday, November 28th, and it can be preordered via Amazon, Barnes and Noble, Indiebound, and Indigo. 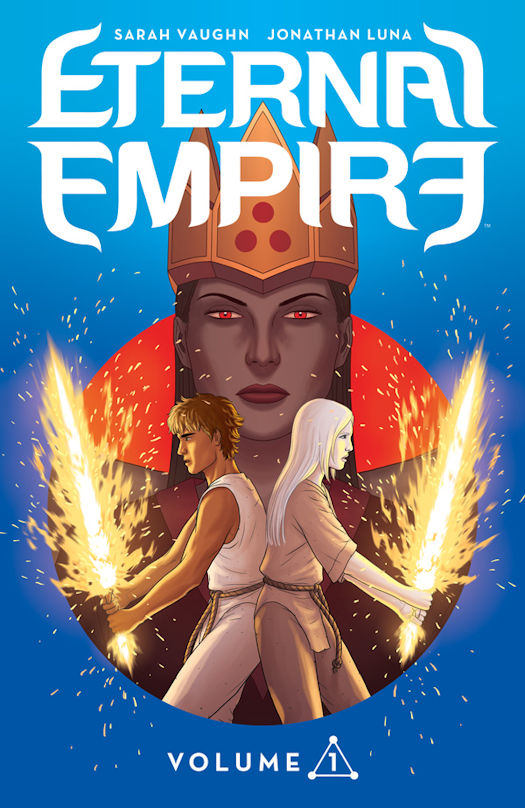 ABOUT IMAGE COMICS
Image Comics is a comic book and graphic novel publisher founded in 1992 by a collective of bestselling artists. Image has since gone on to become one of the largest comics publishers in the United States. Image currently has five partners: Robert Kirkman, Erik Larsen, Todd McFarlane, Marc Silvestri, and Jim Valentino. It consists of five major houses: Todd McFarlane Productions, Top Cow Productions, Shadowline Comics, Skybound Entertainment, and Image Central. Image publishes comics and graphic novels in nearly every genre, sub-genre, and style imaginable. It offers science fiction, fantasy, romance, horror, crime fiction, historical fiction, humor and more by the finest artists and writers working in the medium today. For more information, visit www.imagecomics.com.
Posted by Qwill at 8:48 AM