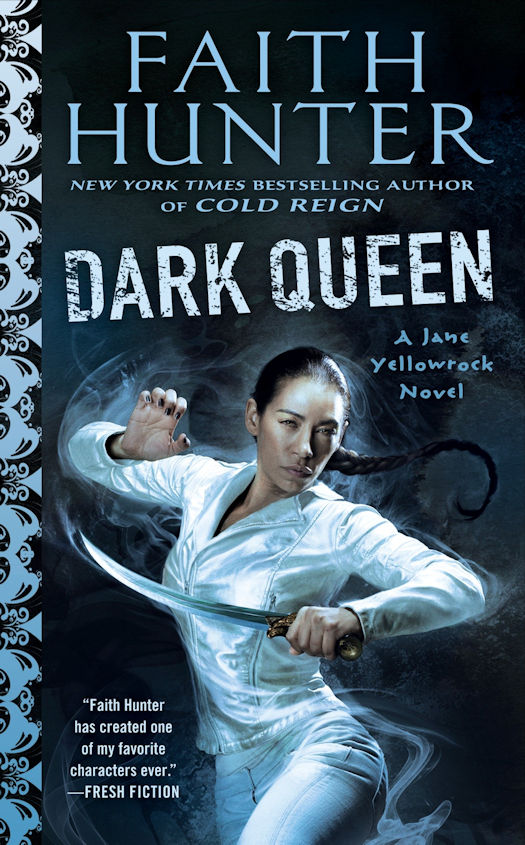 Jane Yellowrock used to hunt vampires, but now she must fight–and win–beside them.

As Enforcer to the vampire Master of the City of New Orleans, Jane Yellowrock stakes her reputation and her life on keeping her territory safe. But Leo has been issued a blood challenge by the emperor of the European vampires, who seeks to usurp all of his power and possessions. If Leo loses the match to the death, the city will be forfeit, and the people of New Orleans will suffer the consequences. Jane can’t let that happen.

Preparing for the duel requires all of Jane’s focus, but with so much supernatural power in play, nothing goes according to plan. She has to rely on herself and the very few people she knows she can trust to stand and fight. Only two things are guaranteed: nothing is sacred, and no one is safe.

When I saw another Jane Yellowrock book available through NetGalley, I could hardly wait until it was approved and loaded onto my Kindle. As one of my favorite authors, Faith Hunter is now writing two series, but this is the one that I loved first. I do have to say, I did start reading cautiously – in the last several novels, Jane and the New Orleans vampires have been preparing for a visit from the European mithrans (vampires). I worried that when the meeting finally came about, it would not live up to the hype set in the previous several books. My worries were quashed when it became apparent that this was less a visit and more an invasion, with a series of formalized fights set up between the oldest and strongest of the American vampires and their people and the oldest and strongest of the Europeans. At risk was the freedom of humans and paranormals throughout the United States – the stakes were set high.

Because the European vampires were typically aristocrats used to pomp and circumstance, there is still some negotiating rules and requirements in the first part of the book, which might have seemed a little boring if Hunter hadn’t dropped a bomb in the form of a new character, Jane’s full-blooded brother, Ari.

One of the best aspects of Hunter’s series has been Jane’s need and search for family. Having come out of the woods as a supposed orphan child, Jane had gone through the foster care system, and it had not been kind to her. Since coming to New Orleans, she had accepted her housemates, Eli and Alex Younger, as business partners and family members. Along the way, she also acquired a vampire primo, Edward, and a werewolf, Brute. But she had been certain there were no other blood relatives of hers out there. With Leo, king of the American vampires and Jane’s boss, to confirm Ari’s DNA, Jane has a lot of mixed feelings about this new brother – ecstasy that he is alive; anger that it took so long for him to contact her; joy that there are other relatives; and fear about what it all means for her.

But there is little time to deal with this new relative. The Conclave is on, and the fights are brutal and to the death. Several characters who have held secondary positions in the series for quite some time are killed. This definitely amped up the level of tension, especially when Jane’s adopted brother, Eli, is called to fight. It appeared that no one was safe, and this was especially true with the ending. Suffice to say, I cannot reveal more without giving away spoilers. What I can say is that Dark Queen ends on a high, if totally unexpected note.
Posted by Qwill at 5:10 AM