Days of Hate: Act One Available in July

DAYS OF HATE: ACT ONE WILL BE COLLECTED INTO TRADE PAPERBACK AND AVAILABLE THIS JULY

The United States of America, 2022: the loss that ripped two lovers apart drove one into the arms of the police state and the other toward a guerrilla war against white supremacy. This is the story of what happens when they meet again. A story of much more than just revenge.

A terrifyingly realistic dystopian tragedy—in the vein of The Americans and The Handmaid's Tale—The Onion's AV Club describes DAYS OF HATE as a "speculative fiction that doesn't pull punches" and IGN calls it "a beautiful and haunting look at a very troubled world."

It can be pre-ordered on Amazon, Barnes & Noble, Books-a-Million, IndieBound, and Indigo.

The trade paperback collects chapters #1-6 of the twelve-part series. 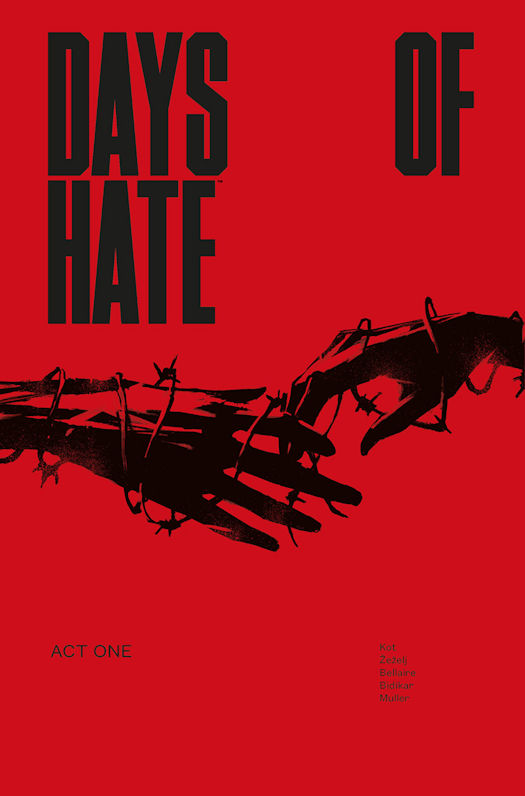 ABOUT IMAGE COMICS
Image Comics is a comic book and graphic novel publisher founded in 1992 by a collective of bestselling artists. Image has since gone on to become one of the largest comics publishers in the United States. Image currently has five partners: Robert Kirkman, Erik Larsen, Todd McFarlane, Marc Silvestri, and Jim Valentino. It consists of five major houses: Todd McFarlane Productions, Top Cow Productions, Shadowline Comics, Skybound Entertainment, and Image Central. Image publishes comics and graphic novels in nearly every genre, sub-genre, and style imaginable. It offers science fiction, fantasy, romance, horror, crime fiction, historical fiction, humor and more by the finest artists and writers working in the medium today. For more information, visit www.imagecomics.com.
Posted by Qwill at 5:39 AM