Interview with Tyler Whitesides, author of The Thousand Deaths of Ardor Benn


Please welcome Tyler Whitesides to The Qwillery as part of the 2018 Debut Author Challenge Interviews. The Thousand Deaths of Ardor Benn was published on May 15th by Orbit. 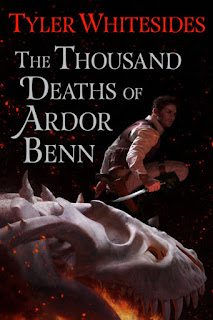 Tyler:  I recently found a story I wrote when I was about seven years old. It was about a monster who went looking for dinner, but he couldn't find any so he went home only to find out that his monster mother had made dinner for him.

Tyler:  I would consider myself a hybrid, but leaning quite heavily toward being a plotter. I've found that if I don't plot enough, the story will ramble on with no end in sight. I'd say I plot about 70% and leave about 30% up to discovery as I write. Often, that unplanned 30% takes me by surprise and ends up being some of my favorite parts.

Tyler:  For me, I'd say the most challenging thing is dealing with expectations. Not just readers' expectations, but my own. Every time I sit down to write I feel a tremendous pressure to make this paragraph better than the last one I wrote. Make this chapter better than the one before, the next book better than the first one. I've got so many ideas swimming around in my head, I want to make sure I execute them the very best that I can. With that comes a lot of self-imposed pressure that can be crippling if left unchecked.

Tyler:  Books! I've loved fantasy since I was little and the things I read definitely influence my writing. As a young reader, I loved the Redwall series by Brian Jacques, The Hero and the Crown by Robin McKinley, and The Dark Is Rising sequence by Susan Cooper. As a teenager, I devoured the Shannara series by Terry Brooks. Lately, I've been loving the works of Brandon Sanderson.

In addition to reading, I spent a lot of my childhood outdoors, hiking and exploring the mountains of northern Utah with my friends and family. The grandeur of nature and the mountains always inspired me - when a fog settled in and covered the peaks it was easy to imagine a company of travelers and their wizard guide coming down the slopes.

TQ:  You are the author of 2 best-selling children's series - Janitors and The Wishmakers. How different for you (or not) is writing for adults?

Tyler:  That's a great question. There are definitely similarities. The more I learn about writing, the more I realize that everything is about characters. Whether writing a children's book or an adult fantasy, the focus should be on crafting interesting characters whose actions are well motivated. In writing The Thousand Deaths of Ardor Benn, I tried to keep what I loved about writing for children - fast pacing, humor, and plenty of dialogue. But this book also allowed me to do things I'd never done in writing - explore heavier themes, develop more complex magic systems, and take a little more time inside the characters' thoughts. I loved both experiences, and hope to continue writing in both genres.

TQ:  Describe The Thousand Deaths of Ardor Benn in 140 characters or less.

Tyler:  Ardor Benn is a master of intricate plans, but he may have bitten off more than he can chew. Hired by a priest to steal the king's crown, Ardor assembles his team and begins an infiltration into high society. But he soon discovers that there is more at stake than getting paid.

TQ:  Tell us something about The Thousand Deaths of Ardor Benn that is not found in the book description.

Tyler:  The magic system is derived from harvesting a biproduct from the dragons and processing it down into powder. This "Grit" can then be ignited to create detonation clouds with varying effects. There are fifteen types, ranging from Grit that creates clouds of Light, or Heat, or even clouds of weightlessness.

TQ:  What inspired you to write The Thousand Deaths of Ardor Benn? What appeals to you about writing Fantasy?

Tyler:  There's something appealing about tackling a long story. I love reading them because they last. I like to live in the world and think about the characters and their situations. There is so much imagination in fantasy, allowing the reader to extrapolate what they want to learn from the story, whether that was really the author's intention or not.

I've always wanted to write an epic fantasy. The idea for The Thousands Deaths of Ardor Benn started with the magic system, an idea I had been kicking around in my brain for more than fifteen years. I was between projects for my children's series, and decided I would begin my first fantasy epic. I thought I'd pick away at it whenever I had some down time, and eventually finish in a few years. To my surprise, the characters really took hold of me and I was able to write the entire first draft in about six months.

TQ:  What sort of research did you do for The Thousand Deaths of Ardor Benn?

Tyler:  I spent some time researching geography, elevation, climate, and vegetation. The book takes place on a series of large islands that are rather unique, with a high cliff shoreline (think fjords, or the cliffs of Dover all the way around each island). I also did some research into flintlock guns, although the firearms in the story (while similar to flintlock) are powered by in-world magic. High society in the world centers around symphony concerts. I have a BA in music, so it was fun to remember some of the composition and musical form/analysis terminology.

At the end of the day, I was writing a fantasy book, so I obviously deviated from some of the facts in order to make all the pieces work within the world I was creating. After all, I was worldbuilding, not going for historical accuracy.

TQ:  Please tell us about the cover for The Thousand Deaths of Ardor Benn.

Tyler:  Tommy Arnold did a great job with the artwork for the cover (and Lauren Panepinto on design). The character depicted is indeed Ardor Benn, the cunning master of heists, crouched atop the skull of a dragon. Although you can't see it in the artwork, the kingdom's throne is actually mounted atop that skull. I love the way Ardor is poised, ready to spring into action with an expression on his face that seems to say, "I got this."

TQ:  In The Thousand Deaths of Ardor Benn who was the easiest character to write and why? The hardest and why?

Tyler:  Writing the chapters from Ardor Benn's point of view was really fun and flowed quite naturally for me. I was able to put a lot of humor into the character, and Ardor is constantly engaging in witty banter. He likes to pretend that nothing bothers him, when in fact he tends to care deeply about what he's doing. Too deeply, sometimes. Ardor moves the story along at a swift pace.

The most difficult character to write was Isle Halavend. He's the priest who hires Ardor to steal the crown. His chapters explore religion, truth, and history of the world, so I had to be very careful to stay consistent and check my own facts. Halavend harbors his true motives, but his chapters unveil a lot of earth-shattering epiphanies for everyone. Needless to say, it was a challenge to keep it all straight and get it right.

TQ:  Which question about The Thousand Deaths of Ardor Benn do you wish someone would ask? Ask it and answer it!

Tyler:  Which type of Grit is your favorite, and what does it do? Visitant Grit is by far the most powerful type. It is controlled by the Wayfarist religion, and will only work for those that are worthy to detonate it. The effect is a cloud in which a holy paladin can appear, powerful enough to decimate life with his very presence.

TQ:  Give us one or two of your favorite non-spoilery quotes from The Thousand Deaths of Ardor Benn.

"This was madness and genius, mixed and detonated on the spot."
OR:
"It's our new hideout."
"The Bakery on Humont Street?" she read.
"A dangerous place, to be sure," added Ard. "Enough secret meetings there and none of us will be squeezing through a culvert grate."

Tyler:  The Thousand Deaths of Ardor Benn is the first book in the Kingdom of Grit trilogy. The second book should be coming out in 2019. In the meantime, I have another children's book coming out this fall, which is the sequel to the Wishmakers. I love writing and I feel so fortunate to be doing this. Thanks to everyone willing to take a chance and pick up one of my books. I hope you enjoy!

Tyler:  Thank you for having me! 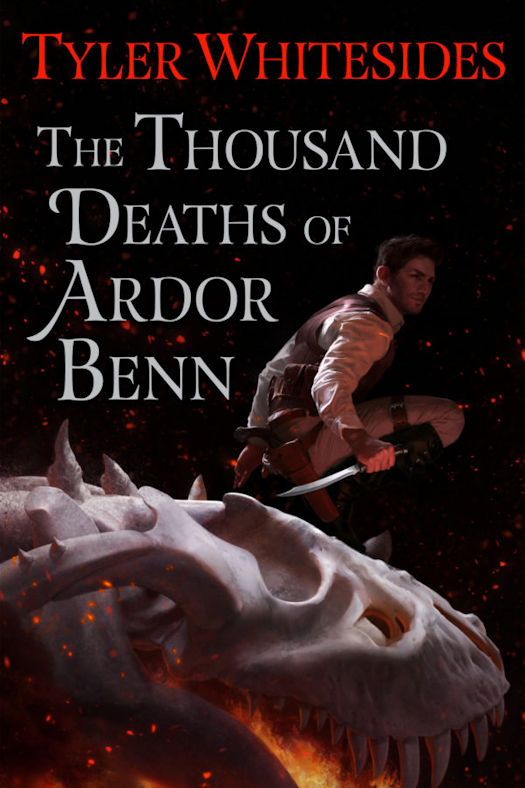 Ardor Benn is no ordinary thief. Rakish, ambitious, and master of wildly complex heists, he styles himself a Ruse Artist Extraordinaire.

When a priest hires him for the most daring ruse yet, Ardor knows he’ll need more than quick wit and sleight of hand. Assembling a dream team of forgers, disguisers, schemers, and thieves, he sets out to steal from the most powerful king the realm has ever known.

But it soon becomes clear there’s more at stake than fame and glory – Ard and his team might just be the last hope for human civilization.

Tyler is the author of bestselling children’s series, Janitors, and The Wishmakers. The Thousand Deaths of Ardor Benn is his adult debut. When he’s not writing, Tyler enjoys playing percussion, hiking, fly fishing, cooking, and theater. He lives in the mountains of northern Utah with his wife and son.