Please welcome RR Haywood to The Qwillery. Extinct, the 3rd novel in the Extracted Trilogy, was published on May 17, 2018 by 47North. 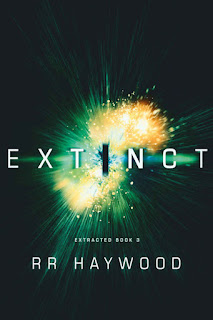 RR:  Hi! Thank you for having me. Cor, blimey – sounds evil doesn’t it? A plotter, a pantser or a hybrid? They’re like the gang names of societal groups in a dystopian future that roam the skeletal remains of the cities and the vast wastelands. The Plotters plot and scheme and work to the plan. They’re organised and ruthless whereas the Pantsers run free and lawless, going where the day takes them, having cray cray shenanigans and wild parties, and there, in the background skirting the fringes, are the quieter yet still playful Hybrids.

I’m so writing that as a book. Copyrighted! Bugger off other writers. Mine mine mine…
Er, so I guess I do all three, and I can take equal amounts of pleasure from writing within each discipline.

You cannot beat those days when you sit down with a plan and hit a mammoth word count. That sense of accomplishment is not to be underestimated.

Likewise, sitting down to a white blank page and simply going at it with action / reaction and flying by the seat of your pants is just gorgeous, but aye, you are more likely to stall and write yourself into a corner that way.

Mostly I write hybrid. With The Undead (UK’s best-selling zombie series – woohoo! Get the plug in) I set the characters the end goal for the day / scene / plot, but how they do that, and what happens on the way is down to them.

RR:  I adore writing fast-flowing, rapid-fire dialogue with multiple characters each with their own voice, and I would gladly fill a whole book with that, but damn it, readers want pesky annoying things like plots and protagonists and antagonists and other stuff. I guess self-indulgence is the answer and learning that what I love to write the most may not be the things people like to read the most.

TQ:  Describe Extinct (The Extracted Trilogy 3) in 140 characters or less.

RR:  “A book with people in it doing time travel!” No, that’s awful. Hang on, let me try again… “Time travel, dinosaurs, big bombs and big bunkers…” argh, that’s even worse. Gosh, this is hard. “Extinct is the third book in the Extracted series and it’s awesome…”

TQ:  Tell us something about Extinct that is not found in the book description.

RR:  (See above with my awful pseudo tweets)

Hmmm, a significant number of scenes are set against the backdrop of the allied destruction of Germany in 1945 during one specific period that saw over 1000 bombers in the skies in one day. It’s brutally realistic.

TQ:  What inspired you to write The Extracted Trilogy? What appeals to you about writing SF and especially Time Travel novels?

RR:  There were a number of influencing factors. The Undead had been submitted to publishers and turned down, but with some very strong feedback that they loved my writing and style, but they did not want to invest in the zombie genre. That got me thinking of what to write next. At that time, I had recently read The Chronicles of St Mary by the wonderful Jodi Taylor which planted the time-travel seed in my mind. I had also always wanted to write my Grandfather as a character – he was in the Royal Navy in WW2. Eventually all of those things, plus a million others, all gave birth to Extracted.

My interest in time-travel was more about the impact such a thing would have and how governments would want to weaponise it.

TQ:  What sort of research did you do for The Extracted Trilogy?

RR:  I researched the Cretaceous, Jurassic and Triassic periods to establish when I wanted certain parts of the story set, and within that I delved into the creatures and fauna and flora known to have existed in those times. There is still so much we do not know about our own distant past, and for a writer that is just fantastic because you can have one foot in reality, and the other in pure poetic make-it-all-up-land.

In all honesty, any scene can require research – anything from Public transport systems within a certain city to what you should do with a broken nose.

With regards to time travel – this is where I can be a little bullish in my attitude. Time travel does not exist. It is entirely fictional; therefore, it is down to the writer on how they want to play with it. I had a few people early on telling me that I had to include pre-destiny as the major plotline. Why? Yeah it might be a factor but there are no rules.

TQ:  In The Extracted Trilogy who was the easiest character to write and why? The hardest and why?

RR:  Mad Harry Madden was the easiest. A British Commando from WW2. He was modelled on my own Grandfather. I knew what he looked like and I had his essence straight away. Writing Harry in any scene is just pure pleasure.

Miri is the hardest. That character is so layered it’s untrue, and even now, after three books, I’m still finding hidden motivations within her.

TQ:  What are your feelings on concluding The Extracted Trilogy?

RR:  It ain’t over yet! 47North wanted a trilogy and that was delivered as planned. I have however, left myself lots of nice breadcrumbs to pick up and I will definitely go back into that world for more when I can.

I’m just finishing a new science-fiction story about a robbery on board a fleet of spaceships. It’s great fun and hopefully that will be going out to publishers very soon.

I’ve also written a new time-travel story which centres on an organisation that recruits and sends people back in time to “fix and tweak” things. That will also be pushed out soon I hope.

After that I have a ton of projects I want to do!

RR:  Thank you so much for having me. It’s been very kind of you to give me this space to yack on and I hope I haven’t bored you all too much. 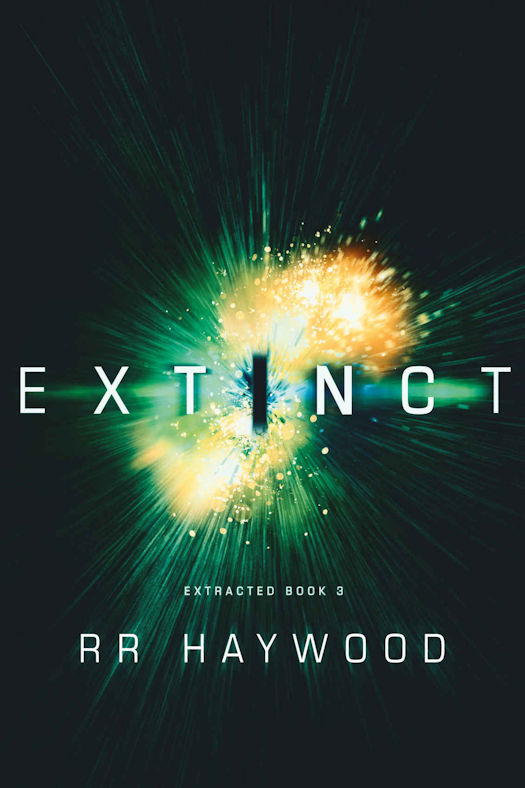 The end of the world has been avoided—for now. With Miri and her team of extracted heroes still on the run, Mother, the disgraced former head of the British Secret Service, has other ideas…

While Mother retreats to her bunker to plot her next move, Miri, Ben, Safa and Harry travel far into the future to ensure that they have prevented the apocalypse. But what they find just doesn’t make sense.

London in 2111 is on the brink of annihilation. What’s more, the timelines have been twisted. Folded in on each other. It’s hard to keep track of who is where. Or, more accurately, who is when.

He is also the creator and author of THE UNDEAD. The UK’s best-selling zombie horror series. A self-published phenomenon that has become a cult hit with a readership that defies generations and gender.

He has lots of tattoos and lives in a cave somewhere underground away from the spy satellites and invisible drones sent to watch over us by the BBC. He is a certified, badged and registered hypochondriac and blames the invisible BBC drones for this.