Age of Bronze Returns With Full-Color Editions This September

PORTLAND, OR, 05/21/2018 — Eric Shanower (The Wonderful Wizard of Oz, Little Nemo: Return to Slumberland) will release all-new full-color editions of his acclaimed historical fiction series beginning this September with AGE OF BRONZE, VOL. 1: A THOUSAND SHIPS.

Helen runs off with Paris. Agamemnon declares war on Troy. Achilles hides among girls. Odysseus goes mad. And that’s only the beginning.

This is the Trojan War like you’ve never seen it before, featuring vibrant colors by Harvey Award-nominated Black Cherry Bombshells creator John Dallaire that lift the politics and passion of Eric Shanower’s work to new heights.

“I'm really happy to present AGE OF BRONZE in color at last,” said Shanower. “Color gives an exciting new dimension to the story. John Dallaire has been great to work with, and I hope readers will really love the new look.”


Select praise for AGE OF BRONZE:

“[Shanower’s] dialogue is formal but not florid, and the narrative flow is clear and
simple. But the story also has many amazing scenes for an artist—and Shanower
makes the most of them, with a fine-lined style in black and white drawings evoking
woodcuts and classical paintings.” —Publishers Weekly

“Gripping to read and beautiful to look at, a feast of images fit for the gods.” —Salon

“A worthwhile addition to anyone’s collection. I would heartily recommend this series to
anyone interested in the Trojan War, Greek mythology in general, or the Mycenaean
Bronze Age.” —Ancient World Magazine

“As erudite as it is entertaining, Shanower’s Herculean task is executed with the grace
of the gods.” —Entertainment Weekly 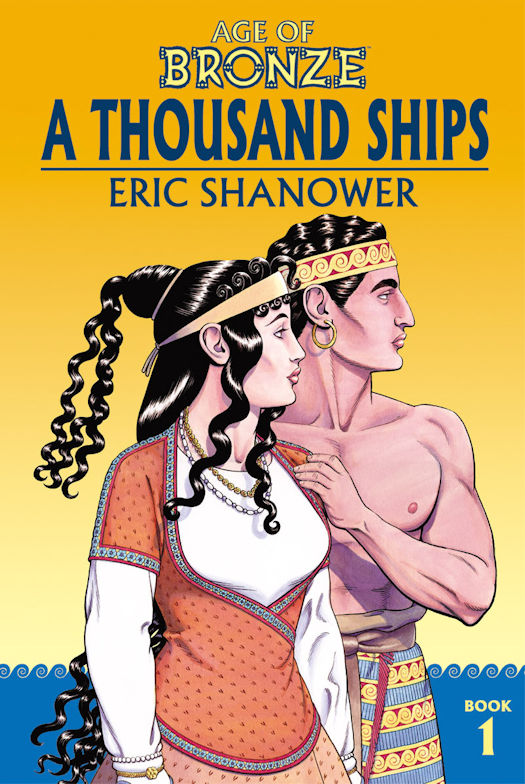 ABOUT IMAGE COMICS
Image Comics is a comic book and graphic novel publisher founded in 1992 by a collective of bestselling artists. Image has since gone on to become one of the largest comics publishers in the United States. Image currently has five partners: Robert Kirkman, Erik Larsen, Todd McFarlane, Marc Silvestri, and Jim Valentino. It consists of five major houses: Todd McFarlane Productions, Top Cow Productions, Shadowline Comics, Skybound Entertainment, and Image Central. Image publishes comics and graphic novels in nearly every genre, sub-genre, and style imaginable. It offers science fiction, fantasy, romance, horror, crime fiction, historical fiction, humor and more by the finest artists and writers working in the medium today. For more information, visit www.imagecomics.com.
Posted by Qwill at 6:00 AM