LEVIATHAN A GIANT, SUMMER LAUNCH FOR IMAGE COMICS
“A page of Nick Pitarra's art cuts a swath of mesmerizing detail and
vivid characters across the mind, leaving one breathless in anticipation
for the next page where it happens all over again.” —J.H. Williams III
(The Sandman: Overture, Promethea, Batwoman)
PORTLAND, OR, 05/25/2018 — Join multiple Eisner-winning writer John Layman (CHEW) and Eisner-nominated artist Nick Pitarra (THE MANHATTAN PROJECTS), along with soon-to-be-nominated-for-best-colorist Michael Garland (THE MANHATTAN PROJECTS) for an eye-popping, face-melting, reality-defying, nonstop rush of pure adrenaline this August in the forthcoming LEVIATHAN.

“Nick and I have wanted to work together for a long time, and when I found out he had a hole in his schedule I jumped at the chance to write what I hope will be the quintessential Nick Pitarra book, a book that will take advantage of all the energy and madness he brings to a page,” said Layman. “Hundreds of years from now, when robot historians ask who Nick Pitarra was, this is the book they will boot up.”

Poor Ryan DeLuca didn’t buy enough beer for his party, and while he was out on a beer run his idiot buddies busted out some mystical arcana and performed a summoning ceremony—a ceremony that summoned a giant monster from hell! 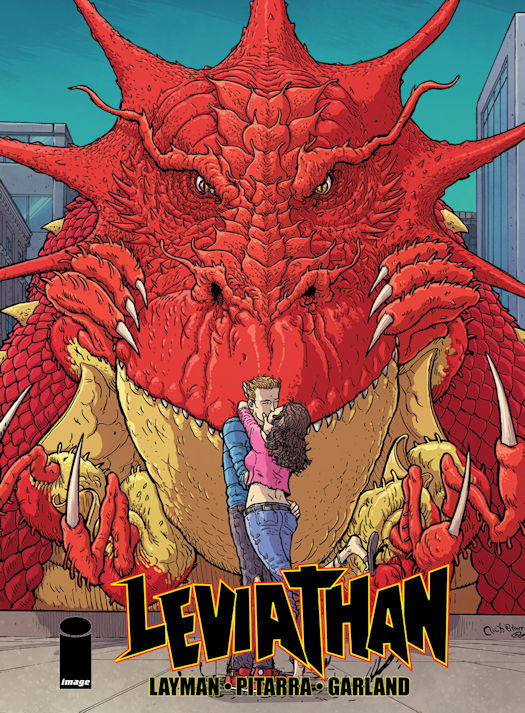