Image Comics is pleased to announce the middle-grade series PIX by Gregg Schigiel (writer and artist on SpongeBob Comics, writer of X-Babies: Stars Reborn), sure to enchant kids of all ages with a teen superhero who will fight her way into readers’ hearts.

Schigiel, once part of Marvel Comics editorial, is perhaps best known for his work in SpongeBob Comics, where he's told numerous wacky stories as well as introduced Mermaid Girl to SpongeBob's Mermaid Man & Barnacle Boy pantheon. He brings the same humor and quirk, and more, to Pix’s story.

“Pix brings together a lot of things I love—superheroes, fairy tales and mythology, talking animals, fun and funny banter—to make something awesome for kids,” said Schigiel. “I'm biased, but I'd have dug it when I was ten or 11 years old.”

Pix is a superhero—but she also believes herself to be a fairy and a princess to boot. And if that weren’t enough for one teen to juggle, in PIX, VOL. 1 she’s got attacking electronics, secret crushes, a magic 8-ball monster, cell service issues, a dragon war, a bad date, worried moms, a furtive frog, and a malevolent monkey, all jockeying for her attention.


“A fabulously fun read in a classic comics style.” —Jimmy Gownley, Amelia Rules and
The Dumbest Idea Ever


“People say there are no superheroes for girls. What they really want is a famous girl
superhero. Give Pix fifty years to establish herself and then jump on the bandwagon…
or be one of the cool people who reads it now.” —Chris Giarrusso, G-Man


“I loved it! I love that [Pix] has friends and life stuff to deal with on top of the crazy things
that happen! Dialogue seems real...loving the artwork.” —Franco Aureliani, AW
YEAH! Comics, Tiny Titans, Dino-Mike


“What a great hero...I wish I had someone like that when I was a tweenager or
teenager!” —Flo Steinberg, Marvel Comics 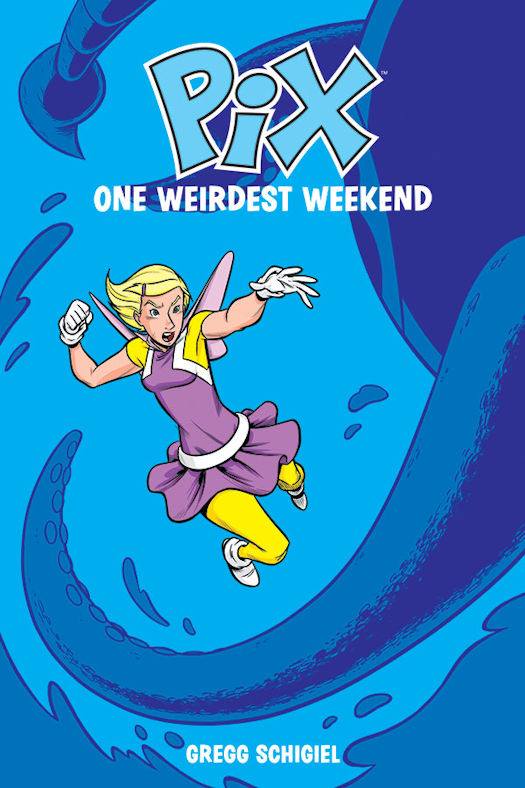