Please welcome Alan Baxter to The Qwillery. Bound, the first novel in the Alex Caine series, was published in the US by Ragnarok Publications on December 20th. 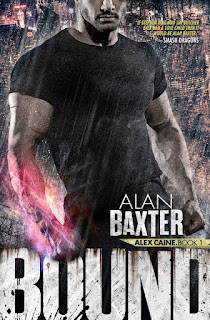 I’d like to thank The Qwillery for hosting a guest post from me today. I thought maybe I’d write about how I’m totally not a psychopath. Bear with me, it really is related to writing.

It might seem like a strange thing to write about, but when you’re an author of dark fantasy and horror, you’d be surprised how often people expect you to be Hannibal Lecter, or worse. So many times I’ve had people say to me, “Wow, you’re so normal!” which is actually rather offensive, but I know they don’t mean it as an insult. Normal? How very dare you!

Or people say some variant of “You’re so much nicer than I thought you’d be.” It’s weird, because I bet people don’t go up to science-fiction writers and say, “Oh, you’re not an astronaut?” Or approach romance writers with a nervous, “Sorry, are you having sex right now?”

Yet people seem to regularly expect writers of horror and dark fiction to be nasty, grim, nihilistic people. We’re not! We’re lovely, I promise. (Well, most of us.) My pal, Kaaron Warren, one of Australia’s most amazing horror authors, has a theory. (Incidentally, you’ve read Kaaron’s work right? If not, go and read it now. No seriously, right now. This post will still be here when you get back.) But yes, Kaaron’s theory. She says that the nicest people in the world are plumbers, butchers and horror writers. They all spend so much time elbow deep in shit, blood and… well, horror, that they get it all out of their system. It’s not festering away in there. When you spend large parts of your life in those conditions, any time you’re not buried therein, you’re tip top. Happy to be out in the sunlight, among people who aren’t trying to eat your face.

I don’t know if it’s entirely true, but I think Kaaron is onto something. And it’s also why so many people like to read dark fiction. We go on a rollercoaster to experience the thrill of almost certain death – how can this train possibly stay on the rails, we’re all going to die! HAHAHA! Then it’s over and we’re all shaky and grinning at each other like loons, saying, “We survived!” Then we look shiftily left and right until someone says, “Let’s go again!” In the same way that a rollercoaster reminds you you’re alive by artificially putting you so close to death, so does dark fiction help people process the genuine shit in life by putting them so close to fictitious monsters in the safety of their armchair, reading a book.

And for those of us who write the dark stuff, while we may put ourselves into the shoes of villains and monsters, killers and demons, we only wear those shoes for a little while and, when we take them off again, we’ve benefited from the catharsis of the experience. It makes us even nicer people than we were before. So honestly, I’m not a psychopath. I just pretend to be one for a while here and there in the privacy of my own study. Hopefully the results are entertaining for anyone who subsequently reads my books.


Alan’s award-nominated dark fantasy thriller trilogy, The Alex Caine Series – Bound, Obsidian and Abduction – gets its US release with Ragnarok Publications, starting on December 20th with Bound. Books 2 and 3, Obsidian and Abduction, will be out in July 2017. Ask your local store and library to get copies in if they don’t have them. 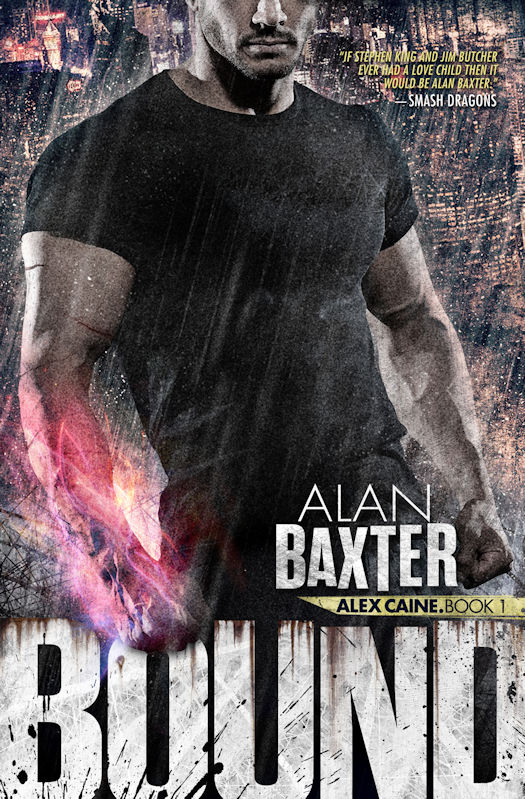 Alex Caine is a martial artist fighting in illegal cage matches. His powerful secret weapon is an unnatural vision that allows him to see his opponents’ moves before they know their intentions themselves.

An enigmatic Englishman, Patrick Welby, approaches Alex after a fight and reveals, ‘I know your secret.’ Welby shows Alex how to unleash a breathtaking realm of magic and power, drawing him into a mind-bending adventure beyond his control.

And control is something Alex values above all else…

A cursed grimoire binds Alex to Uthentia, a chaotic Fey godling, who leads him towards chaos and murder, an urge Alex finds harder and harder to resist. Befriended by Silhouette, a monstrous Kin beauty, Alex sets out to recover the only things that will free him – the shards of the Darak. But that powerful stone also has the potential to unleash a catastrophe which could mean the end of the world as we know it.

Alan Baxter is a British-Australian author who writes supernatural thrillers and urban horror, rides a motorcycle and loves his dog. He also teaches Kung Fu. He lives among dairy paddocks on the beautiful south coast of NSW, Australia, with his wife, son, dog and cat. He’s the multi-award-winning author of several novels and over seventy short stories and novellas. So far. Read extracts from his novels, a novella and short stories at his website – www.warriorscribe.com – or find him on Twitter @AlanBaxter and Facebook, and feel free to tell him what you think. About anything.