SHUTTER #25 is a landmark issue for the popular pandimensional adventure series, but it will also celebrate Image Comics’ 25th anniversary with this exceptional moment in Image Comics history.

“Image Comics is why I write comics,” said Keatinge. “After a lot of soul-searching, I felt the best way to express my gratitude on the Image partners' momentous anniversary is to unite our characters over eating eggs and drinking mimosas.”

“It's been a dream come true, drawing characters that were created and brought to life by the Image founders,” said del Duca. “SHUTTER may not have existed if it weren't for those seven men who left work-for-hire comics to make creator-owned stories. I loved spending time with their characters, incorporating them into our storyline, and having them interact with our own characters, Kate, Alain, and Alarm Cat. I had so much fun!”

Fans dare not miss the terrifying biscuits-and-gravy secret no one will see coming in SHUTTER #25. Here, SHUTTER will kick off 2017 with these founding heroes meeting up with the cast of SHUTTER’s beloved character ensemble for what may prove to be one of their most delicious adventures yet.

“The SHUTTER team found a great way to celebrate the history of Image Comics—and the universal love of two of the most important meals EVER combined into the best meal (Eat it, Dinner)!” added Brandon Graham (KING CITY, PROPHET), artist of SHUTTER #25’s special variant cover. 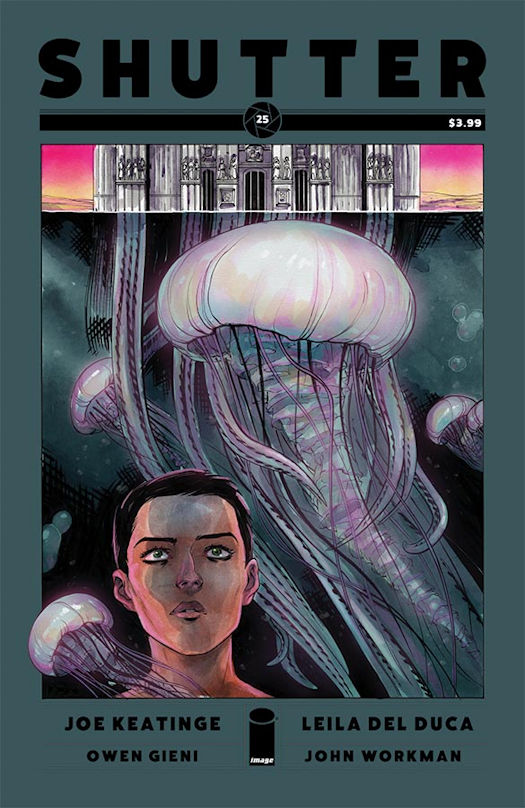 ABOUT IMAGE COMICS
Image Comics is a comic book and graphic novel publisher founded in 1992 by a collective of best-selling artists. Image has since gone on to become one of the largest comics publishers in the United States. Image currently has five partners: Robert Kirkman, Erik Larsen, Todd McFarlane, Marc Silvestri and Jim Valentino. It consists of five major houses: Todd McFarlane Productions, Top Cow Productions, Shadowline, Skybound and Image Central. Image publishes comics and graphic novels in nearly every genre, sub-genre, and style imaginable. It offers science fiction, fantasy, romance, horror, crime fiction, historical fiction, humor and more by the finest artists and writers working in the medium today. For more information, visit www.imagecomics.com.
Posted by Qwill at 7:25 AM