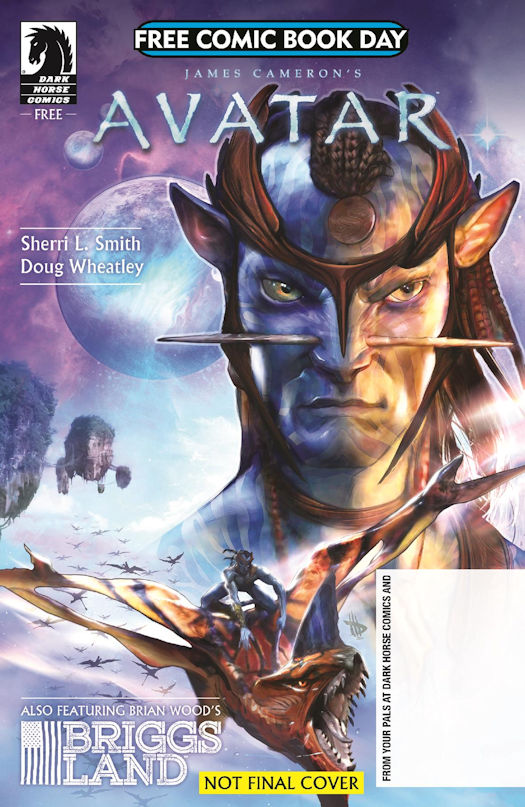 The first tale is a “comic book exclusive scene” that begins to explore some of the yet-untold backstory of Jake Sully as he prepares for the final battle against the humans of the RDA.

Sherri L. Smith (Flygirl, Sparrow), Doug Wheatley (King Tiger, Star Wars), and Wes Dzioba (Hack/Slash, Aliens vs. Predator) bring the world of James Cameron’s blockbuster motion picture Avatar to comic book form for the first time ever. Jake Sully seeks to ignite a connection with the Toruk (the majestic great leonopteryx) by remembering the depth of his bond with his twin brother and the stories he shared of the great partnerships of myth and legend.

Moments before the climactic final battle, Jake Sully prepares to embrace his Na’vi destiny and bond with the majestic Toruk – the Great Leonopteryx. Jake remembers the depth of his bond with his twin brother and the stories he shared of epic partnerships of myth and legend. The Avatar Free Comic Book Day story launches the beginning of a new line of Avatar comics and graphic novels, which will start to roll out in late 2017.

Also included in this issue is a new story from the critically acclaimed series Briggs Land, created by Brian Wood (DMZ, Rebels). Briggs Land is nearly a hundred square miles of rural wilderness that harbors the largest and most secretive antigovernment secessionist movement in the United States, overseen by matriarch Grace Briggs. This story finds Grace confronting an armed militia that is running an opioid ring on her land while she fights to keep her family intact. Werther Dell’Edera (Cobra, Skorpio) and Lee Loughridge (Batman Adventures) illustrate and color the comic. Briggs Land is in development for an AMC television show.

Free Comic Book Day is a single day when participating comic book specialty shops across North America and around the world give away comic books absolutely free to anyone who comes into their shops. Learn more at FreeComicBookDay.com.

For thirty years, Dark Horse Comics has proven to be a solid example of how integrity and innovation can help broaden a unique storytelling medium and establish a small, homegrown company as an industry giant. Founded in 1986 by Mike Richardson, the company is known for the progressive and creator-friendly atmosphere it provides for writers and artists. In addition to publishing comics from top talent, such as Eric Powell, Mike Mignola, Geof Darrow, Brian Wood, Gail Simone, Stan Sakai, and Guillermo del Toro, and comics legends, such as Will Eisner, Milo Manara, Kazuo Koike, Neil Gaiman, and Frank Miller, Dark Horse has developed its own successful properties, such as The Mask, Ghost, X, and Barb Wire. Its successful line of comics, manga, and products based on popular properties includes Dragon Age, Buffy the Vampire Slayer, Aliens, Conan, Tomb Raider, Halo, The Witcher, Serenity, Game of Thrones, and Avatar: The Last Airbender. Today Dark Horse Comics is the largest independent comic book publisher in the US and is recognized as one of the world’s leading entertainment publishers.