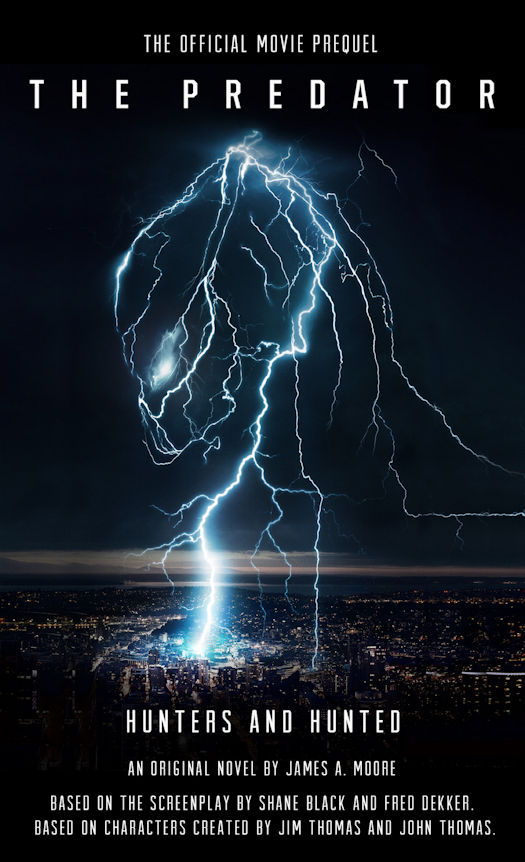 For centuries Earth has been visited by warlike creatures that stalk mankind’s finest warriors. Their goals unknown, these deadly hunters kill their prey and depart as invisibly as they arrived, leaving no trace other than a trail of bodies.

When Roger Elliott faced such a creature during the Vietnam War, he didn’t expect to survive. Nor did he expect that, decades later, he would train the Reapers—a clandestine strike force attached to Project Stargazer. Their mission: to capture one of the creatures, thus proving its existence, disassembling its tech, and balancing the odds between the HUNTERS AND HUNTED

James A. Moore’s The Predator: Hunters and Hunted is the official prequel to the upcoming film The Predator directed by Shane Black. After the original Predator film came out in 1987, I immediately became a fan. The last Predator film was released in 2010. I’ve only read a few issues of the many different comics starring the Predator, and I’ve never read any of novels about the character. I am, however, a fan of a good novelization as they often give out little nuggets of information that you don’t get in the movie. So when I saw this book the other day, I couldn’t resist grabbing it and giving it a go.

Jame A. Moore is a very engaging writer that takes a hold of you and throws you off a cliff. He quickly introduces you to several characters, some who show up on the list of characters in the upcoming film and others that don’t -- General Woodhurst, Roger Elliott of the CIA, and Tomlin the leader of The Reapers, a Black ops group tasked with finding and hunting down a Predator.

Woodhurst is your stoic military general, stone-faced and quiet, Roger Elliott is a haunted ex-military man, who survived an encounter against a Predator during the Vietnam war and is tasked with the job of training the Reapers. Tomlin is a dedicated skilled Patriot. Out of the three of these men, Roger Elliott is the most developed character as we spend time with him during his first encounter with the Predator. Currently he's a grizzled recovering alcoholic living with the horror he experienced.

One aspect of the book I really enjoyed is the time we spend in the Predator’s mind as he goes about hunting down humans. I’m not sure if this has been done in comics or past novels, but it’s an enjoyable aspect of the book that fills a niche you don’t get in the films.

Besides the Predator, the other antagonist is Traeger, a man who is helping General Woodhurst gain congressional funding for their project, but you quickly see Traeger is the typical, greedy double-dealing baddie looking for ways to profit from the capture of an alien with advanced tech.

Moore fills the book up with as much action as possible while fleshing out some of the Predator mythos. I don’t think I’m spoiling anything because the trailers of the upcoming movie show the Reapers are successful in capturing the Predator. My only disappointment in the book was the fact that the Predator got captured fairly quickly. I would have enjoyed a little more of a drawn out hunt, but it was still very entertaining.

The Predator: Hunters and Hunted is an amazing prequel novelization. It did it’s job. I can’t wait till the movie comes out. It’s yet to be see how smoothly it lines up with opening of the upcoming film. There is adult language and violence in the book, so I would only recommend the book to adults. I would, without hesitation, recommend anyone who is a fan of the film series and looking forward to the new movie to go out and grab the prequel.
Posted by Qwill at 6:05 AM