Review: Island of the Mad by Laurie R. King 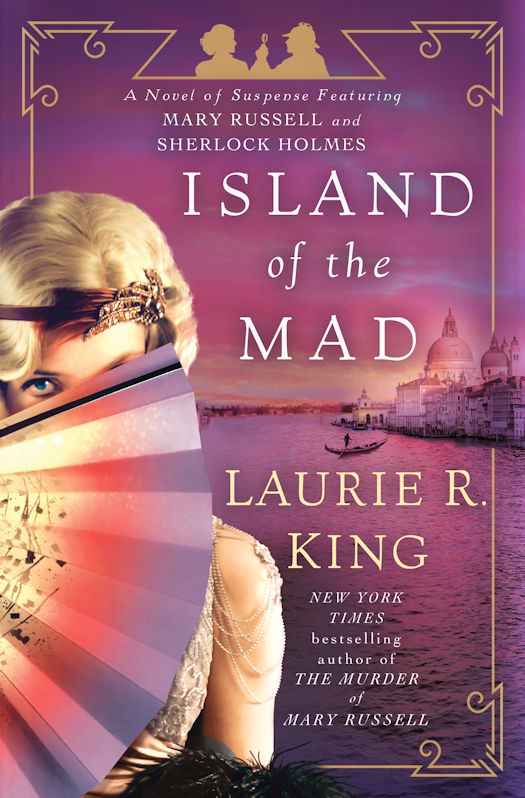 With Mrs. Hudson gone from their lives and domestic chaos building, the last thing Mary Russell and her husband, Sherlock Holmes, need is to help an old friend with her mad and missing aunt.

Lady Vivian Beaconsfield has spent most of her adult life in one asylum after another, since the loss of her brother and father in the Great War. And although her mental state seemed to be improving, she’s now disappeared after an outing from Bethlem Royal Hospital . . . better known as Bedlam.

Russell wants nothing to do with the case—but she can’t say no. And at least it will get her away from the challenges of housework and back to the familiar business of investigation. To track down the vanished woman, she brings to the fore her deductive instincts and talent for subterfuge—and of course enlists her husband’s legendary prowess. Together, Russell and Holmes travel from the grim confines of Bedlam to the winding canals and sun-drenched Lido cabarets of Venice—only to find the foreboding shadow of Benito Mussolini darkening the fate of a city, an era, and a tormented English lady of privilege.

In her series about Mary Russell, Laurie R. King has partnered the infamous Sherlock Holmes with a wife that is his intellectual and deductive equal, despite being half his age. When asked by her best friend to investigate the disappearance of an aunt who has been voluntarily living in Bedlam, Mary would like to decline, but both she and Holmes agree that a trip to Venice, where Lady Vivian might be hiding, would be preferable to staying home.

Venice itself almost becomes a character itself, as King describes it. The islands, the waterways, the various inhabitants – all of them are described in great detail and reverence. It is obvious that King has done a significant amount of research about the city, both past and present, and has probably walked down the streets and perhaps attempted to row a gondola as Mary does in this novel.

The timeframe for the novel is the early 20th century, the start of the Roaring Twenties, when both Americans and Europeans gathered in Venice to party and forget the horrors of the Great War and the potential for another. As an added touch of verisimilitude, King adds the character of Cole Porter as a peer of Holmes. The description of Porter, his marriage, and his part in the trick that Russell and Holmes play in the end all jibe with what has been written in history about this musician.

As is usual with King, she has more to tell than just a mystery. She implies her political views by adding the fascist characters and describing their brutal actions and ways, in line with the takeover of Italy by Benito Mussolini. She also reaffirms her feminism by drawing on the ways in which most women were treated during this period, particularly those unprotected single female family members who had little to no money of their own and no place else to go. Including Mussolini’s wife as a patient at the mental hospital that Mary visits was another nice historic touch.

Overall, the mystery that King lays out is complicated enough to keep a reader interested, but she includes enough details that the conclusion makes total sense. The series just keeps getting better and better, with vivid descriptions, wry humor, and interesting history.
Posted by Qwill at 6:30 AM