Welcome to August. I can't believe that 2018 is already half over. Where does time go?  Some of you may have seen on the news that the UK is still in the grips of a heatwave. This summer has actually been a summer! I also can't believe that it is August and the weather is still in the high 20's and low 30's. The downside of all this lovely weather (despite sweating buckets at work) is that I can't concentrate on reading. I usually feel a bit like a wet noodle and can't pick up a book. I have however, read 1 book this week that I can tell you about. So what did I read? 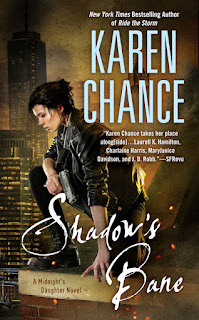 Berkley has published the 4th instalment of Karen Chance's Dorina Basarab series - Shadow's Bane. Not a lot has changed for the newly appointment Senator as her life is just as wild and crazy as ever. When the nephew of one of her fey friends goes missing and presumed sold into slavery Dory is on the case. She discovers that slaves are being bought and sold to take part in illegal fight - a sort of underground fight club. Well this is what it seems on the surface. Dory and her alter ego Dorina are determined to find the missing fey and put the slavers out of business, permanently. All this while fending off assassins who want to take her place on the council and the growing dominance of her true vampire self, Dorina.

I prefer this series to Chance's Cassie Palmer series mainly due to the pace. While the pace is still frenetic at least Dory has the opportunity to eat dinner and have a heart to heart with her bestie Claire. Dory isn't as driven by her sex drive as Cassie is and there tends to be more of a plot in this series. It was interesting, that  while Dory is supposed to be the star of this story, it is Mircea that steals it. Dory's present day story is interlaced with chapters dedicated to Mircea's story back in the 1400's when he was trying to find a way to separate Dorina and Dory to help his daughter survive. It is through these back flash chapters that the background to the story's whole plot starts to unfold. We are also given insights into Dorina's real powers which add another element to the plot in the present day story.

The prominent theme in this instalment is one of belonging or perhaps more about family. Dory worries that Dorina is becoming more dominant and that she will take over and destroy everything that she has tried to hold onto like her relationship with the hunky vampire Louis-Cesare. There are a few sideline plots with her roommate Claire and the battalion of fey soldiers that are living in their back garden protecting Claire and her baby (and heir to the Light Fey throne) Aiden. Dory desperately wants to belong and keep hold of the community of friends she has started to think of as family. In the past Dorina, when she takes over, she manages to destroy any relationships that Dory has tried to build....until now. In between the Dory/Dorina elements of the plot is a lot of action. Usually with Dory getting her butt kicked and ending up with bruises on her bruises. Saucy scenes  between Dory and Louise-Cesare are still there but these are more like filler between the slaver plotline and the Mircea POV chapters. Overall, this was a good balance between action, romance and plot. A few of the characters that have been missing in previous books return along with the introduction of new ones. It did kind of feel like a final book as there was a resolution to a number of plot threads from previous books. It seemed like things were being tied up for Dory so I don't know if this is the last we will hear of the 5 foot nothing, hard as nails dhampir.


I hate to sound like a Hugh D'Ambray groupie but I bought the audio version of Ilona Andrews Iron and Magic.  I loved the narrator - Steve West  - who did the voice over for Galahad in the video game The Order 1886 (which I also loved.....a must play for any gamers out there). He has a very swoony voice and it worked perfectly for Hugh. Some of the female characters didn't sound anything like I imagined they would but he did such a great job of Hugh I wasn't too disappointed.


The temperature is going to drop a bit this week so hopefully I can get some of my reading mojo back. Until next week Happy Reading! 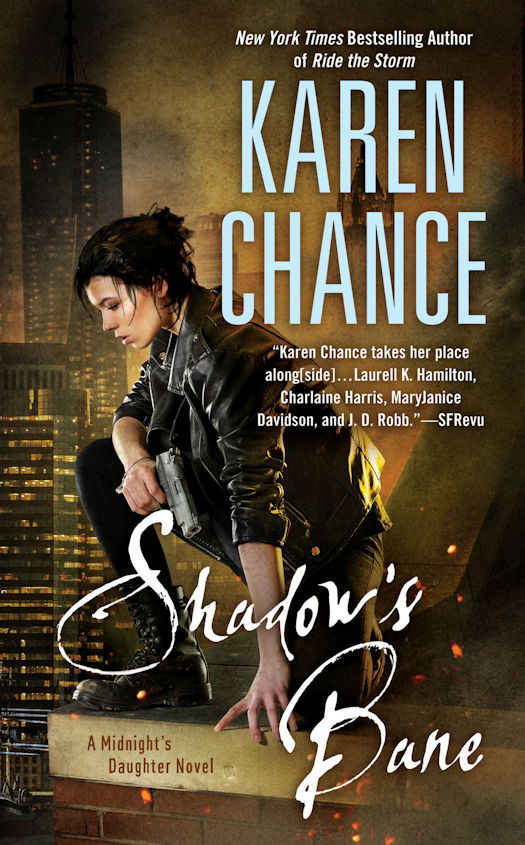 Half-human, half-vampire Dorina Basarab is back–and facing her biggest challenge yet in the next urban fantasy in the New York Times bestselling series.

Dorina Basarab is a dhampir–half-human, half-vampire. As one of the Vampire Senate’s newest members, Dory already has a lot on her plate. But then a relative of one of Dory’s fey friends goes missing. They fear he’s been sold to a slaver who arranges fights–sometimes to the death–between different types of fey.

As Dory investigates, she and her friends learn the slavers are into something much bigger than a fight club. With the Vampire Senate gearing up for war with Faerie, it’ll take everything she has to defeat the slavers–and deal with the entirely too attractive master vampire Louis-Cesare….