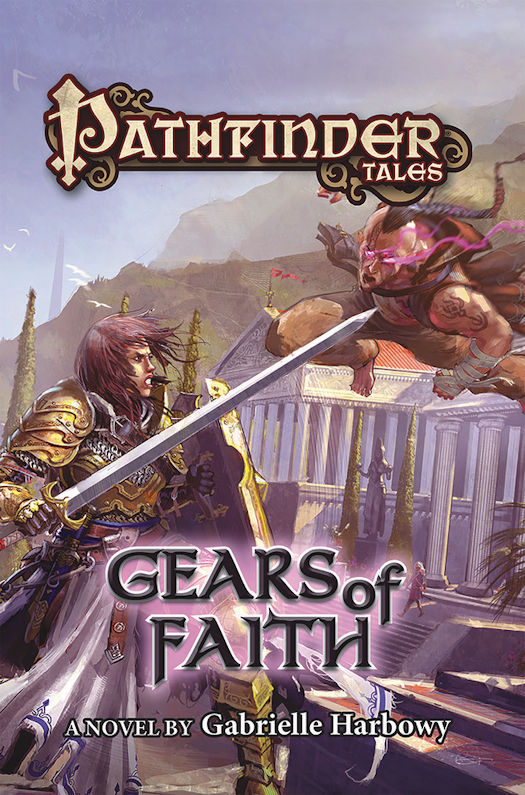 Pathfinder is the world's bestselling tabletop role-playing game—now adapted as a series of novels.

Keren is a sworn knight of Iomedae, proper and disciplined in every way. Her girlfriend, Zae, is the opposite—a curious gnome cleric of the clockwork god, who loves nothing more than the chaos of her makeshift hospitals. When a powerful evil artifact is stolen from a crusader stronghold, both knight and gnome are secretly sent to the great city of Absalom to track down the stolen bloodstone.

Sure, they may not be the most powerful or experienced members of their organizations, but that’s the whole point—with legendary champions and undead graveknights battling at every turn in their race to recover the stone, who’ll notice one young knight and her gnome? All they have to do is stay alive long enough to outsmart a thief capable of evading both gods and heroes.

Gabrielle Harbowy’s Gears of Faith, while enjoyable, often fails to fulfill its promises. We follow two main characters, Keren Rhinn, a human, and Zae, a gnome, who are lovers and who both have a strong religious faith. Keren, as a Holy Knight, is more comfortable using her sword to accomplish her god’s missions, while Zae, a tinkerer, uses her faith in healing and creating. Together they are given a mission to find a thief of a holy relic while also seeking further training.

The hidden antagonist is the thief who stole a part of a dead god and we’re left to wonder who the thief is and what he or she wants to accomplish with the relic. We follow Keren and Zae as they travel to a new city to both seek new training in their respective religions. Keren learns how to call on her god to help her cast magic, and Zae receives formal inventor training. While in the city we meet many different characters that could be the thief.

Harbowy’s writing has a very natural flow to it, which makes it easy to lose time reading. She writes characters you easily embrace and enjoy, and is very descriptive in her writing. My main problem with the book is that Harbowy starts it off by saying the characters are going to be going to school and apprehending a thief. While Harbowy technically does show us the characters going to school and looking for the thief, we never really dive into either plot points very deeply. I felt like we spent the book in a wading pool. I never felt like I got a satisfactory immersion with either character. Because of this, the climax of the plot felt rushed and unsatisfying.

Harbowy's Gears of Faith, while being a wonderful fantasy story, in the end falls flat on its promise of showing the characters growing while going to school and seeking the thief. There isn't an issue with language. Minor acts of violence and sexual situations make it appropriate for older teens and adults. If you would like a light fantasy read, pick up your own copy today.
Posted by Qwill at 6:35 AM