Please welcome V. M. Escalada to The Qwillery. Gift of Griffins is published on August 7th by DAW. 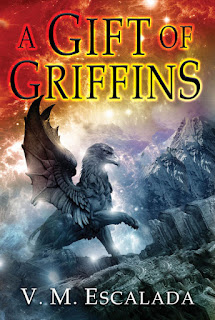 V. M.:  Great to be here, thanks for inviting me. I'd have to say I'm a hybrid. My academic training pushes me in the direction of outlines, but I only prepare one to be sure that I've got a viable story, that the idea works and has someplace to go. That isn't necessarily where it actually does go, of course.

TQ:  Tell us something about Gift of Griffins that is not found in the book description.

V. M.:  I see that nothing about Griffinhome is mentioned, so there's nothing about how the griffins' society works, and what Weimerk's place is in it. It does have an impact on the plot, though obviously I'm not going to tell you what that is.

TQ:  What inspired you to write the Faraman Prophecy? What appeals to you about writing Fantasy?

V. M.:  I was a fan of those forensics shows that were all the rage for a while. Since my brain lives in a fantasy space, I thought, "what if psychics were used as crime scene investigators?" They could just walk into the crime scene, touch things, and know immediately what had happened. I figured out pretty quickly that the idea wouldn't make a story – at least not a crime-based story, since the psychics would just say "he did it" and the story would be over. So then I wondered, what if being a psychic was the problem? What if they were going about their lawful business when their country was invaded by people who thought Talents were witches that had to be destroyed?

I consider fantasy one of the oldest genres. The way we approach it today, we're able to put our characters into situations that stress them to the breaking point in a way that non-genre writing just can't do. And it also allows the writer to present a society or a world that is different from the world we live in – explore that world, examine it and, occasionally, compare it to the real world.

I've said this before, and I know I'll say it again: I believe that genre literature in general, and fantasy literature in particular is the only place where the protagonist can behave heroically, honourably, without being treated ironically.

It's the only genre where characters can to try to behave as their best selves.

V. M.:  Well, there are already an awful lot of dragons around, aren't there? Seriously, I liked the idea of griffins because they're dual-natured. Lions and eagles are both at the top of their food chains, top predators. I thought that would make an interesting character, particularly since we meet Weimerk as a hatchling.

TQ:  Please tell us about magic works in the Faraman Prophecy world.

V. M.:  I like magic to be personal, not dependent on artifacts that anyone can use. So in both books of The Faraman Prophecy, magical abilities are something that people are born with, and trained to use. Like other natural abilities, singing, dancing, cooking etc. some are better at it than others.

TQ:  In Gift of Griffins who was the easiest character to write and why? The hardest and why? Which character has surprised you?

V. M.:  Probably the easiest character to write was Ennick. He doesn't have a huge role in terms of lines, but in his way he's extremely important. He's unique in his motives and outlook, which made him easy to understand, at least for me, some of the other characters seem to have a bit of difficulty.

The hardest character was Weimerk, the griffin. It's always a challenge when you're creating a non-human consciousness. Why would they think the same way we do?

I'd have to say the character than surprised me is Wynn Martan. She became a bit of a Mercutio-like character in that she often steals the scenes she's in. She's a redhead, and it turned out that she has the true ginger attitude.

TQ:  Does Gift of Griffins touch on any social issues?

V. M.:  In many ways I'm looking at the issue of racial/social biases and prejudices from a number of angles. The Faraman Polity is fairly gender-equal, with a slight bias toward women. So you'll find that ranking military officers, nobles, landowners, and even the Luqs, are very likely to be women. The Faramans themselves don't find anything unusual in this, but the Halians are a totally different matter. Not only are they male-centric, but they believe Talents are abominations that must be destroyed. However, it's not just gender equally that gets explored. Biases pop up between the different types of magic-users, and even within the same groups.

TQ:  Give us one or two of your favorite non-spoilery quotes from Gift of Griffins.

V. M.:  Most of my favourite lines concern Weimerk the griffin. Here are a few:

Most of my favourite lines concern Weimerk the griffin. Here are a few:

"The griffin showed you?" The woman's tone softened and became kinder. Clearly she thought Ker was mentally defective . . . "And what griffin would that be, my dear?"
Ker pointed upward. "This one."


He might have been half lion and half eagle, but he seemed to have the stomach of both.
<<I am still growing.>> Somehow his thoughts conveyed a clear feeling of offense.
<<Sorry.>>
<<You are not.>>

V. M.:  I had a couple of ideas for more stories in the Faraman universe, but I couldn't choose between them. So, I'm working on a totally different book, where the "magic" and the physical world are linked. The magicians themselves don't understand as much about their magic as they think they do. I'm still working out the kinks, but it looks promising so far.

Still, I'd love to visit Kerida and Tel and Weimerk again someday. And Wynn. I can see her getting into a lot of trouble. 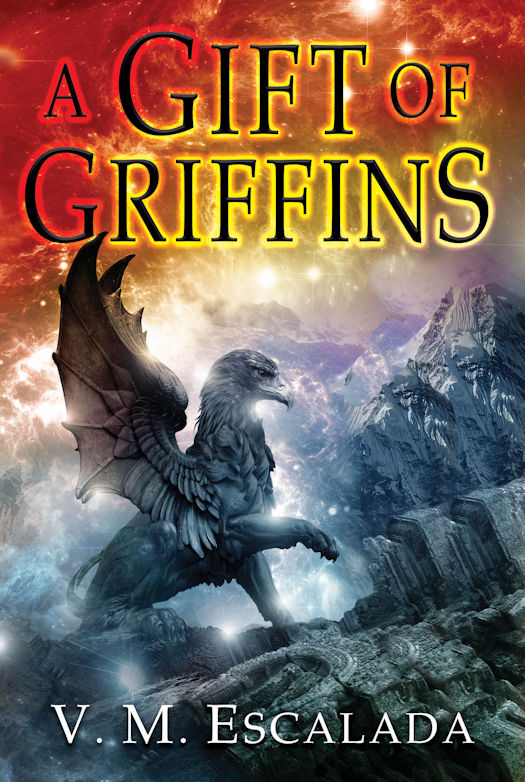 The second book in the Faraman Prophecy epic fantasy series returns to a world of military might and magical Talents as Kerida Nast continues the quest to save her nation.

Kerida Nast and her companions have succeeded in finding Jerek Brightwing, the new Luqs of Farama, and uniting him with a part of his Battle Wings, but not all their problems have been solved. Farama is still in the hands of the Halian invaders and their Shekayrin, and it’s going to take magical as well as military strength to overcome them.

Unexpected help comes from Bakura, the Princess Imperial of the Halians, whose Gifts have been suppressed.  As the Voice of her brother the Sky Emperor she has some political power over the Halian military, and she will use it to aid the Faramans, if Kerida can free her from what she sees as a prison. But whether Kerida can help the princess remains to be seen. If she succeeds, Bakura may prove their salvation. But should Kerida fail, all may be lost…. 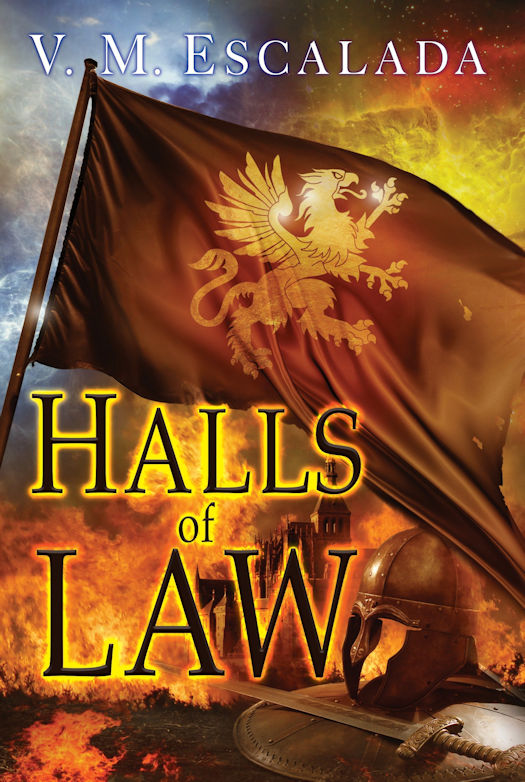 Now in paperback, the first book in the Faraman Prophecy epic fantasy series introduces a world of military might and magical Talents on the brink of destruction–and two unlikely heroes may be its only saviors.

Seventeen-year-old Kerida Nast has always wanted a career in the military, just like the rest of her family. So when her Talent is discovered, and she knows she’ll have to spend the rest of her life as a psychic for the Halls of Law, Ker isn’t happy about it. Anyone entering the Halls must give up all personal connection with the outside world, losing their family and friends permanently.

But just as Kerida is beginning to reconcile herself to her new role, the Faraman Polity is invaded by strangers from Halia, who begin a systematic campaign of destruction against the Halls, killing every last Talent they can find.

Kerida manages to escape, falling in with Tel Cursar, a young soldier fleeing the battle, which saw the deaths of the royal family. Having no obvious heir to the throne, no new ruler to rally behind, the military leaders will be divided, unable to act quickly enough to save the empire. And with the Halls being burned to the ground, and the Talents slaughtered, the Rule of Law will be shattered.

V. M. Escalada lives in a nineteenth-century limestone farmhouse in southeastern Ontario with her husband. Born in Canada, her cultural background is half Spanish and half Polish, which makes it interesting at meal times. Her most unusual job was translating letters between lovers, one of whom spoke only English, the other only Spanish.