“Thanks to Afu Chan and Skybound, we’ve succeeded in making OUTER DARKNESS as perfect and beautiful as I’d envisioned it to be since finishing Chew,” said Layman. “I’m so unbelievably excited that OUTER DARKNESS is being announced to the world. I’m absolutely in love with this book.”

In OUTER DARKNESS, humankind has successfully colonized the galaxy. But during our interstellar travels, we discovered a terrifying secret out in the vast reaches of space...

Enter Captain Joshua Rigg and the crew of the starship Charon, who will encounter demonic possessions, hauntings, and cosmic horror as they embark on a desperate rescue mission into the Outer Darkness of space—where everything wants to kill them.

“It was scary, in good way, working with John Layman and Skybound, especially on a comic filled with monsters and in space where nobody can hear you,” said Chan. “I am always on the edge of my seat while drawing these pages, and I can't wait for people to experience the ride when reading OUTER DARKNESS. It is the best work I've done yet.” 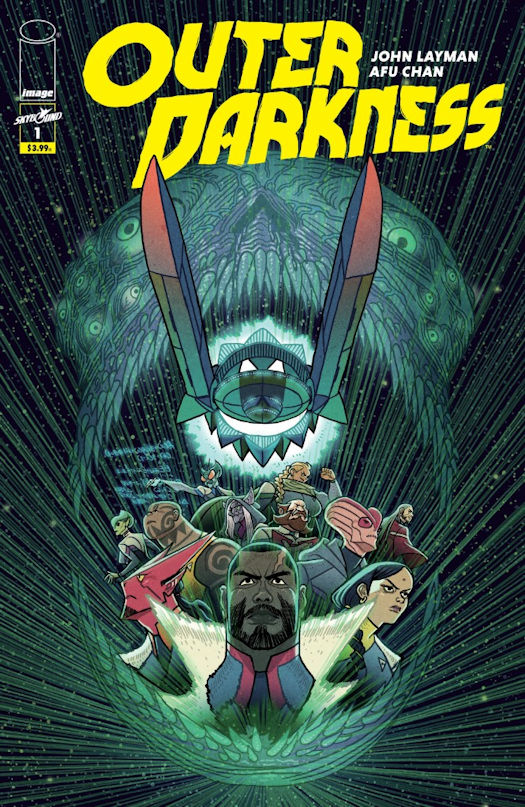 
ABOUT SKYBOUND ENTERTAINMENT
Founded in 2010, Skybound Entertainment is a multiplatform entertainment company specializing in television, comics, film, digital content, interactive, gaming, and merchandise. The company is led by The Walking Dead creator Robert Kirkman and his longtime producing and business partner David Alpert.
Posted by Qwill at 6:25 AM