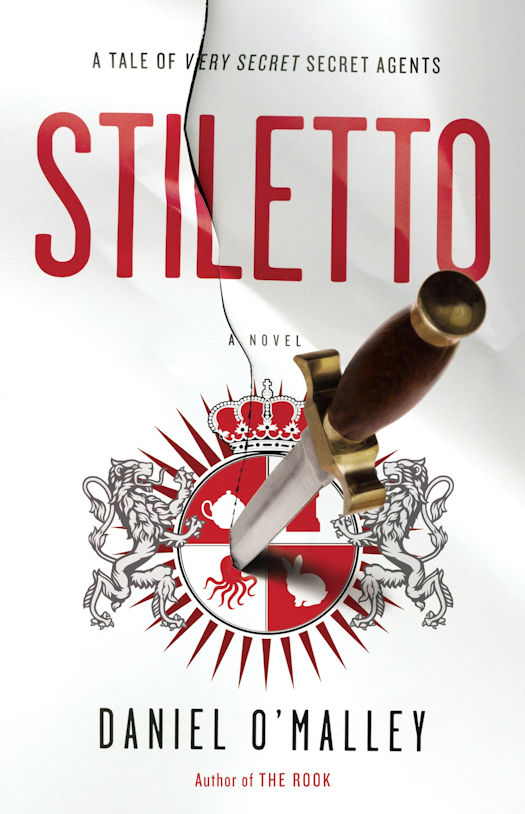 It's been four years since Daniel O'Malley's fantastic debut novel The Rook was published. The Rook tells the story of a covert organisation, The Checquy, and and its high ranking member Myfanwy Thomas. Now O'Malley is back with an equally fantastic sequel Stiletto. In this instalment The Checquy are hosting a delegation of their sworn enemies - The Grafters. Rook Thomas is trying to broker a peace deal to bring the Grafters into The Checquy fold but this seems an almost impossible task. The Checquy agents are indoctrinated from childhood to hate the Grafters - they are The Checquy version of the bogie man. The Grafters are raised to hate The Checquy. The Grafters are scientifically engineered humans, often centuries old, and have been living in Europe virtually in secret. Well until now.

The story is set in London and is told from two different POVs - Odette the lovely surgically enhanced Grafter surgeon and Felicity a Checquy solider who can 'read' the history of any object she comes into contact with. It has been ingrained in Felicity to hate The Grafters and in Odette to fear The Checquy. This unlikely pair are forced to work together when the enemies of both organisations try to destroy the fragile peace and kill as many on both sides as possible. This is truly a story of 'the enemy of your enemy is your friend'.

I will admit that when I first started Stiletto I was a bit disappointed that the story wasn't told from Myfanwy Thomas' POV as I think she is a great character. My disappointment didn't last too long as I soon came to enjoy Odette as much as I had Myfanwy. Rook Thomas is still very important in the plot as one of the main instigators of the peace treaty between the two organisations but it is Odette and Felicity who steal the show. Odette has been sheltered and lived the life of privilege in her Grafter family whereas Felicity is a soldier through and through. They are so very different but through various attempts on their lives discover that they aren't so very different at all.

In my opinion O'Malley is a genius with an acute sense of observation and humour. I loved every minute reading this novel and I spent quite a lot of those laughing at some witticism or keen observation that O'Malley makes. There are many humorous lines in this novel and I could have easily highlighted the whole book.

O'Malley has such a vivid imagination and the ability to create a detailed, interesting world. The agents of The Checquy and The Grafter enhancements were exquisitely crafted so that you could easily picture each of them. This combined with a well constructed plot makes Stiletto a real page turner.

Some of the scenes could be described as a bit gruesome - especially at the start and the end of the book - but I am sure you won't be able to put this book down. Hats off to O'Malley for another fantastic instalment from The Rook Files THE CHECQUY: A centuries-old covert organization that protects the nation from supernatural threat.

THE GRAFTERS: A centuries-old supernatural threat.

After centuries of rivalry and bloodshed, two secret and otherworldly organisations - The Checquy and The Grafters - are on the verge of joining forces, and only one person has the supernatural skills - and the bureaucratic finesse - to get the job done: Myfanwy Thomas.

But as a wave of gruesome atrocities sweep London, ingrained paranoias flare, old hatreds ignite and negotiations grind to a halt. It is up to Myfanwy to find the culprits before they trigger a devastating, all-out, supernatural war between the reluctant allies.