Please welcome Ren Warom to The Qwillery as part of the 2016 Debut Author Challenge Interviews. Escapology was published on June 14th by Titan Books. 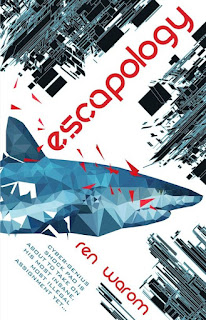 Ren:  Why thank you, it’s a pleasure to be here.

I started writing when I was maybe five or six–– little plays, and silly stories about Jennifer and her mugwump forest friends (I wasn’t acquainted with Burroughs then, so was blissfully unaware of any other mugwumps). I illustrated them too, and my sister spent years mocking them. I can still draw a mugwump. I really can’t recall why I started, probably because I love books. Later on, when I started writing seriously, it was a refuge and an obsession. It kind of still is.

Ren:  I try to be a hybrid but it inevitably goes to hell. I can’t even read my own handwriting when I’m trying to make notes because my brain runs off ahead, so I get super frustrated. I always end up pulling the story out of thin air and being stunned if/when it works. I think that part goes for all writers. We expect bloody mayhem followed by dismal failure; anything else is a pleasant surprise.

Ren:  My lack of an ability to visualize. Until I found out most people can visualize I thought writers were exaggerating about seeing what they write like a film playing in their heads. Turns out they can do that and I’m just borked. Basically I can’t see it at all until I’ve built it word by word. It’s kinda painstaking. I use lots of pictures and watch lots of movies and read voraciously, it all helps to keep my brain in the right space.

Ren:  Anything baroque and dense and macabre and glorious really. Kathe Koja’s deliciously deranged body horror. William Burroughs half-mocking, laconic narrative drawl, all those half lies and hokey routines cut into cinematic clips, way too brutal and dirty to dismiss. The imagery of Bladerunner and Dark City––the filth and damp, the crush of crowds framed in neon and desperation. The complicit, homespun, eerie lunacy of Twin Peaks. I love Ealing comedies and Wodehouse, that mixture of whimsy and raucous japery. Bataille’s peculiar melding of the crude and the philosophical. Moorcock’s almost sensual inventiveness. Anyone or thing that can build visuals and responses I can’t ignore and still somehow ground it. I used to think the visuals, the details, were more important, now I realize they fall flat and ugly without the ground beneath.

TQ:  Tell us something about Escapology that is not found in the book description.

Ren:  It’s about family, fitting in, trying to build a version of yourself you can stand and allowing yourself to get it wrong. It’s quite touchy-feely if you ignore the violence. Even if you don’t.

TQ:  What inspired you to write Escapology? What appeals to you about writing Science Fiction especially Cyberpunk / Cyberweird? Is there a difference between Cyber -punk and -weird?

Ren:  Nothing really, it was a bit of fun. Started life as a short story, something daft, but I like daft. I’m not trying to be serious. I’m not very good at serious.

Science Fiction is this endless arena for exploring odd ideas about humanity and post humanity and machines and AI and the deep of space, all the stuff that fascinates me. You can be deadly serious and relevant or race off piste and go nuts. It feels limitless, unconstrained. Like there’s room for any kind of crazy.

I suppose there’s a serious, academic difference, but for me it’s that Cyberpunk flirts with possible futures, with plausible tech wrapped in grit and spit and crazy, whereas Cyberweird is lunacy with intent. My favourite flavour.

TQ:  What sort of research did you do for Escapology?

Ren:  I try to research. I fail miserably. It’s an ADD thing. I made sure to properly study the cultures of the Gung: Korean/Chinese/Japanese etc, but I stuck to blogs and vlogs; a closer, more personal viewpoint. I researched earthquakes and possible ways to float huge landmasses. I read some freewheeling essays and studies on hacking just for ideas. Mostly I googled when I really needed to and left the rest to imagination.

TQ:  In Escapology who was the easiest character to write and why? The hardest and why?

Ren:  Petrie was the hardest to write. I couldn’t find his angle, his story. Turns out I was over-complicating it. In the end he wasn’t that hard to figure out. He’s a man hewn from circumstance and loyalties.

The rest were all easy to be honest, they were too bright and crazed and wondrous to be difficult. But the easiest of them all? Li and Ho Harmony. They’re the devils on my shoulder. I like them far too much.

Ren:  I always include social issues. I write what matters to me. I write what makes me angry. I don’t think there’s any point in writing anything if you don’t have something to say, even if it’s framed by frothy neon insanity.

TQ:  Which question about Escapology do you wish someone would ask? Ask it and answer it!

Q: What the hell were you thinking?

A: I am not quite the full onion.

TQ:  Give us one or two of your favorite non-spoilery quotes from Escapology.


“If he weren’t wearing his Bengs, Shock would be dragging his feet like a six year old on the way to the dentist right now. This bit right here, this whole delivery in person, in face to face, in the physical dimension as it were, is the reason why he sits up later than usual some nights in the redolent fart stench of old men sleeping, the snores like land ships scraping rock from the crust, and contemplates the positive values of starving. The general pros of homelessness. The benefits of possible mutilation and/or horrific death versus the warmth and safety of his cage. And often finds the margin of cons temptingly thin.”


“Shaking her rat awake, Amiga hustles him into the nearest shoot. She knows this building, knows exactly where Twist will be; the revolving restaurant near the top. It’s his favourite place to eat. Amiga couldn’t even afford the garnish on an entrée. Oh well. Probably taste like crap anyway. In the shoot the rat starts giggling compulsively, so she gives him a slap. Shuts him up for maybe five seconds, then he starts again. Louder.
She leans toward him and says sweetly, “You shut up or I’ll plug your mouth with your eyeballs.”
The rest of the journey upward is silent.”

Ren:  I’m currently working on Virology, the sequel to Escapology. It’s looking pretty damn gnarly, a whole lot denser and darker than Escapology. After that I have so many ways I could go, so many projects I want to dive into, I’m pretty sure I’ll spark like a fault light and explode. Then I’ll write whatever shouts loudest in charcoal.

Ren:  Many thanks for having me! I really enjoyed this. 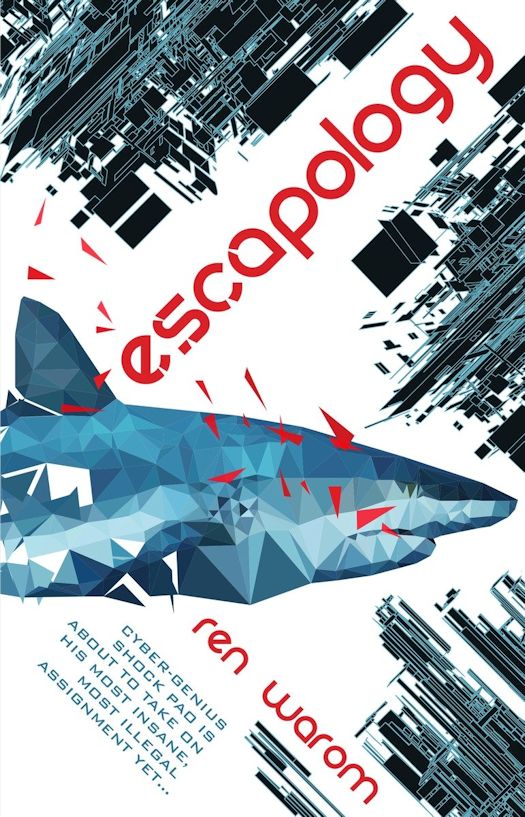 Shock Pao is not just any Haunt—he’s the best. There isn’t a system that he can’t crack into, no virtual lock he can’t pick, nothing he can’t steal for the right price. Outside virtual world the Slip, though, he’s a Fail—no degree, no job, no affiliations to protect him from angry ex-customers. Of which he has quite a few. So when his ex brings Shock a job which could help him escape his miserable existence, he accepts, little realizing that it will turn out to be his most impossible, illegal and insane assignment yet.

Amiga works for Twist Calhoun, one of the toughest crime lords in the Gung, as a Cleaner—assassin. Trapped in a world of kill-or-be-killed, she wants out. But when Shock’s war comes to her, she doesn’t have a choice: it’s her job to bring him to Twist, dead or alive—or it’ll be her head in a bag in Twist’s vault. 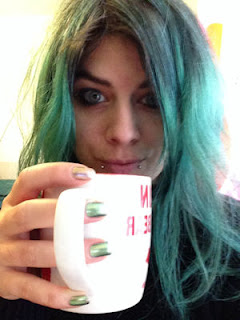 Ren Warom lives in the West Midlands with her three children, innumerable cats, a very friendly corn snake, and far, far too many books. She haunts Twitter as @RenWarom, and can be found on her YouTube channel taking about mental health issues and, of course, books.