Review: The Ghost Rebellion by Pip Ballantine and Tee Morris 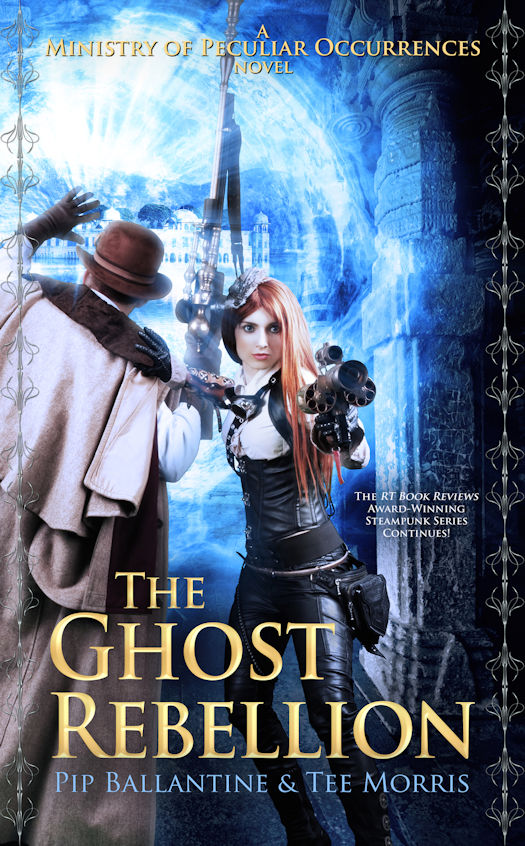 The chase is on! After rescuing Queen Victoria from the clutches of the Maestro, Agents Eliza D Braun and Wellington Books are in hot pursuit of Dr Henry Jekyll. While he continues his experiments on the aristocracy of Europe, he leaves a trail of chaos and despair in his wake. However when Eliza and Wellington run him to ground in India, they are forced to come face to face with ghosts from the past, and the realities of empire.

Meanwhile Ministry agents Brandon Hill and Bruce Campbell travel deep into Russia hunting down a rare ingredient to save Queen Victoria's life. Amid the cold they uncover a threat from the revitalized House of Usher that comes directly from their new Chairman.

All in the Ministry of Peculiar Occurrences will find their allegiances in question, and their mettle tested as a new dastardly era of international intrigue dawns.

They're back!  My favourite archivist and colonial pepperpot are back for another great adventure. In the aftermath of the events of book 4 The Diamond Conspiracy and the Queen's Jubliee the Ministry agents find themselves in India trying to find the elusive villain Dr. Henry Jekyll. What they find is  much more than just the evil scientist. Books and Braun join the Ministry agents in the Indian office to thwart attempts of revolutionists from attacking the British. The story is set roughly at the same time when India starts taking action to kick the British out of the country and out of the Empire.  The authors use this as the perfect backdrop for this steampunk plot.

The final two instalments of this series are self-published and funded through a very successful Kickstarter campaign. I was rather surprised that the publisher had funded only the first four books and ended the series with The Diamond Conspiracy. While I adored books 1-3 I did not enjoy book 4 as in my opinion  the mix of another fictional character and use of time travel did not work for me and diminished the power of these characters. The Ghost Rebellion however, was a return to everything I love about the series - a lot of interaction between Books and Braun, a mystery I didn't guess before the end and the tantalisingly evil, Sophie del Morte. Jekyll and the House of Usher were very much in the background for me despite that they were pivotal to the plot. I just loved the good guys (well and the not so good gal) and all their cool steampunky gadgetry to give Jekyll much notice

Books and Braun aren't the only characters that are back as we are re-introduced to the Aussie alpha male Bruce Campbell and the (fellow) Canadian agent Brandon Hill. There are POV chapters with Bruce as this unlikely duo are sent on almost a perilous mission to Russia in search of the cure for a disease inflicting the Queen. They had an adventure that tested both of them and almost became their last ever. I hadn't really liked Bruce until this novel. I really enjoyed these two characters working together. They are the original odd couple with his love of women and Brandon with his love of good digestion. As much as I love Books and Braun and their interaction it was Sophie del Morte that stole the book for me. The authors gave us a bit of Sophie the person rather than just Sophie the assassin. Some of her inner dialogue is very amusing especially when she is around Eliza and I thought she really grew as a character.

There are a lot of snippets and events that I would love to share with you but I would end up re-counting nearly the whole book. I really enjoyed this novel and looking forward to the final instalment. I am really glad that Ballantine and Morris made the decision to self publish these final two books. This was well worth the pledge in Kickstarter campaign and I would gladly donate again. Another great book for this fantastic writing duo.