Interview with Genevieve Cogman, author of The Invisible Library


Please welcome Genevieve Cogman to The Qwillery as part of the 2016 Debut Author Challenge Interviews. The Invisible Library made its US debut on June 14th and is published by Roc. 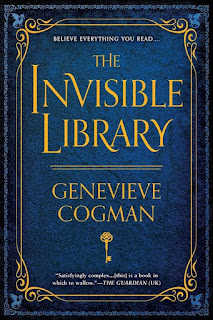 Genevieve:  I think the first time I consciously wrote a story for no other reason than that I wanted to write it was when I was somewhere in my teens at school. It was a story about half a dozen famous detectives (Holmes, Miss Marple, Sir Henry Merrivale, Ellery Queen, etc) being murdered one by one by Sir Arthur Conan Doyle so that he could write a new bestseller. It wasn’t a very good story…

Genevieve:  Hybrid. I generally know the beginning and end and what the story’s basically about, and I have some of the major scenes roughly sketched out, but a lot of other parts are “to be filled in” or “at this point Irene escapes by some clever method I have yet to work out” or similar.

Genevieve:  I think it would be sitting down and actually doing it. I could daydream all day. (People will probably say that I *do* daydream all day.) Actually putting it into words on paper is harder.

Genevieve:  I am afraid this involves a really long list. Everything from classical crime fiction (Sherlock Holmes, Judge Dee, lots of Golden Age stuff) to Tolkien, to other fantasy writers (Zelazny, Le Guin, Moorcock, others…), to Hong Kong martial arts movies and wuxia, to Japanese anime, to English tv series like Doctor Who and The Avengers and Sapphire and Steel … I will pick up good ideas and good style wherever I can find them.

TQ:  You've written for several role-playing companies. How has this influenced (or not) your novel writing?

Genevieve:  It’s improved my writing style in general, and it’s helped me think in critical ways about what I want to achieve in a piece of text, or how I want to convey an idea. It’s also helped me think about the wider implications of ideas which I include in the story. This is because you may put something into a role-playing supplement as a minor detail, but then find that the people actually using that supplement for play will follow it through to game-affecting conclusions. This has led me to be careful when making definite statements about character abilities or background history of the universe – I don’t want to write myself into a corner later, or to have a situation where I have to explain why character X can’t take obvious course of action Y.

Also, in more pragmatic terms, previous writing for role-playing companies has helped me to learn how to accept and use an editor’s comment, and how to set myself writing quotas and stick to them.

TQ:  Describe The Invisible Library in 140 characters or less.

TQ:  Tell us something about The Invisible Library that is not found in the book description.

Genevieve:  There are few book thefts that cannot be conveniently arranged, and without loss of time, either by posing as a housemaid, enlisting London’s greatest detective, or attending the Ambassador to Liechtenstein’s ball while claiming to be a newspaper reporter. (to misquote Ernest Bramah)

TQ:  What inspired you to write The Invisible Library? What appeals to you about writing Fantasy with Time Travel and Adventure?

Genevieve:  I’ve always liked multi-world concepts. The idea of a mysterious library with connections across time and space (well, space at least) has come up in many sources: Terry Pratchett (L-Space), Neil Gaiman, the French role-playing game INS/MV… I added my own twist to it, putting it midway between order and chaos (again, other people like Michael Moorcock and Louise Cooper have used those tropes) and I hope I’ve created something new and amusing.

TQ:  What sort of research did you do for The Invisible Library?

Genevieve:  Mostly online, for details about Victorian London, the British Museum, and so on: though since this was a steampunk world with other scientific advances, I only kept the bits which I felt suited the story. I did also do some reading about crime and about the police force in Victorian London, but to be honest those were books which I already had and which I’d read for enjoyment rather than for specific research in this case.

I also reread my way through the Sherlock Holmes stories, to try to get a grip on a certain character’s speech patterns…

Genevieve:  In many ways Lord Silver was the easiest character to write, since he is a walking stereotype. (And proud of it.) Vale was often the hardest, because I was specifically imitating a famous fictional character, and I wanted to get it right.

TQ:  Which question about The Invisible Library do you wish someone would ask? Ask it and answer it!

Genevieve:  I did wonder if anyone would ask about the relationship between Vale and the elder Miss Olga Retrograde. She’s actually a distant cousin of his. Vale dislikes her as much as he dislikes almost all of his family. He was avoiding her as much as possible during Silver’s party.

TQ:  Give us one or two of your favorite non-spoilery quotes from The Invisible Library.

“I should hope so,” he [Silver] said. “I’ve invited all the best people. Lords, ladies, authors, ambassadors, debauchers, grave-robbers, perverts, sorcerers, courtesans, deranged scientists, and doll-makers. And a few innocent socialites, of course, but generally I receive polite notes of refusal from their parents – or invitations to be horsewhipped.”
“Invitations?” Irene said.
“Notes offering to horsewhip me in front of my club if I even approach their daughters.”

Genevieve:  I’m currently writing book four and planning book five. Book three (The Burning Page) is in the copy-edit stage. It’s astonishing to think that I’ve come this far. Irene and her friends continue to get into trouble. Fae are not always bad: dragons are not always good: Librarians frequently end up running away from things. (I could tell you more, but the ninjas would come after me.)

Genevieve:  Thank you for the questions, and I hope that you enjoy the book. 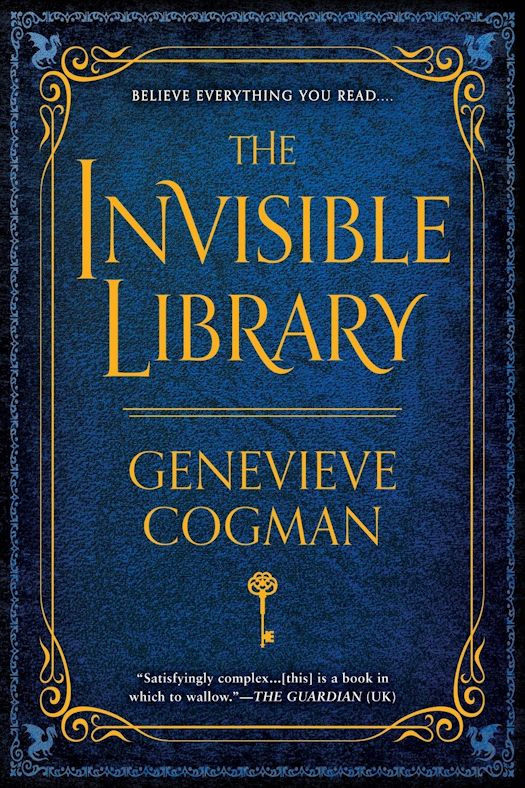 Collecting books can be a dangerous prospect in this fun, time-traveling, fantasy adventure from a spectacular debut author.

One thing any Librarian will tell you: the truth is much stranger than fiction…

Irene is a professional spy for the mysterious Library, a shadowy organization that collects important works of fiction from all of the different realities. Most recently, she and her enigmatic assistant Kai have been sent to an alternative London. Their mission: Retrieve a particularly dangerous book. The problem: By the time they arrive, it’s already been stolen.

London’s underground factions are prepared to fight to the death to find the tome before Irene and Kai do, a problem compounded by the fact that this world is chaos-infested—the laws of nature bent to allow supernatural creatures and unpredictable magic to run rampant. To make matters worse, Kai is hiding something—secrets that could be just as volatile as the chaos-filled world itself.

Now Irene is caught in a puzzling web of deadly danger, conflicting clues, and sinister secret societies. And failure is not an option—because it isn’t just Irene’s reputation at stake, it’s the nature of reality itself…

FEATURING BONUS MATERIAL: including an interview with the author, a legend from the Library, and more!

Genevieve Cogman is a freelance author who has written for several role-playing game companies. She currently works for the NHS in England as a clinical classifications specialist. She is the author of the Invisible Library series, including The Burning Page, The Masked City, and The Invisible Library. 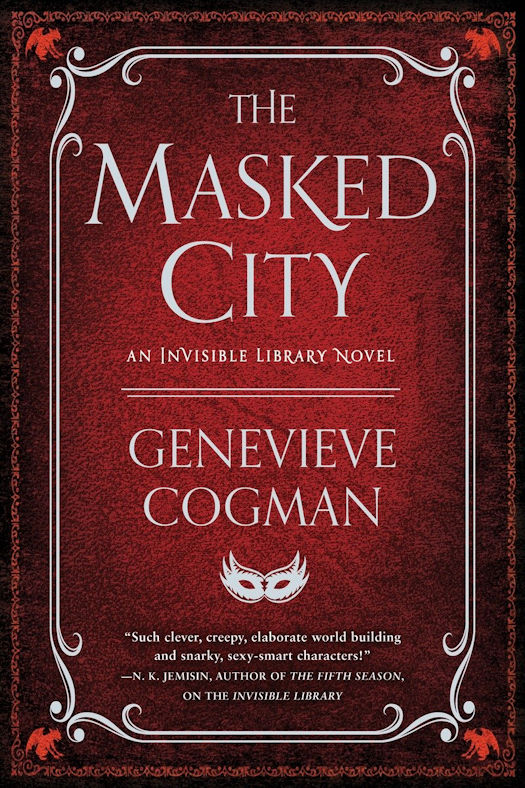