Interview with Jon Skovron, author of Hope and Red


Please welcome Jon Skovron to The Qwillery as part of the 2016 Debut Author Challenge Interviews. Hope and Red is published on June 28th by Orbit. Please join The Qwillery in wishing Jon a Happy Publication Day! 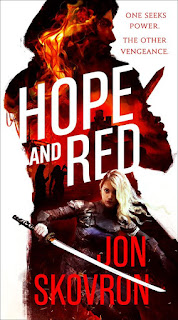 Jon:  When I was in high school, I was going to be a rock star. It was the early 90's and the grunge/alt scene was in full swing. I played guitar or bass in several bands, wrote lots of angst-ridden songs, and generally made bad life choices. And it all went nowhere because, to be perfectly honest, I wasn't really all that good.

When I was in college, I was going to be a famous actor. I studied at an acting conservatory, got my Equity card, did some shows, even auditioned for some pilots. I was better at acting than I was at playing guitar. But while I enjoyed the art of acting, it turned out, the life of a professional actor made me miserable.

Now, this whole time I had been writing. I journaled extensively. I wrote little short stories here and there, just for my own amusement. I even attempted a novel, which was a shameless rip-off of Hitchhiker's Guide to the Galaxy. But for some reason, I never considered writing a viable career choice until one night, during a particularly hellacious production of Merchant of Venice in which I played Lancelot Gobbo. The play was performed in a warehouse without air conditioning in the middle of summer and the director had inexplicably put me in a wool sailor suit. As I sat backstage, dripping sweat, waiting for my next scene, I was reading The World According to Garp and it occurred to me for the first time that I could be an author.

And that was it. Since that hot summer night in 1999, I have strived to build a writing career. It's taken a while, but things seem to be working out.

Jon:  I suppose I'm a hybrid. I write the first few chapters with only a vague idea of where it's all going or what it's all about because I find that thrilling. But usually about a quarter of the way through the book, things start to get muddled. That's when I stop and write my outline. Once I've got that squared away, I go back to writing the draft. Naturally, I ignore most of what I wrote in the outline. But still, writing it makes me feel better and gives me confidence that there is a way to resolve the conflict I so willy-nilly created in those first few chapters.

Jon:  What I find most challenging is the business part of being an "author". But if I had to confine myself only to the craft of writing, I think it would be that period in revisions where you can no longer see the forest for the trees. When you are so saturated with the minutia of the story that you've lost the big picture. That's when I have to step away and let it rest for a while. And ideally give it to a trusted reader who still has some perspective.

Jon:  Naturally, a lot of my influences are other writers. David Eddings, Anne Rice, Neil Gaiman, Ursula K. Le Guin, Michael Chabon, China Mieville, Kelly Link, Holly Black, Jeff VanderMeer, Tim Powers, just off the top of my head. My theater background also factors in quite a bit. Playwrights such as Shakespeare, Chekov, and Wilde have had an impact, of course. But I suspect my acting training itself also contributes a great deal. I've also been an avid comics reader, both western and manga, for my whole life. And anyone who reads Hope and Red will be able to spot the obvious influence of a childhood spent watching as many kung fu films as I could get my hands on in the pre-Internet age.

TQ:  Hope and Red (The Empire of Storms 1) is your first adult novel. How was the experience in writing Hope and Red different (or the same) as when you write Young Adult novels?

Jon:  The biggest difference for me was simply being able to address topics that are not directly related to the teen experience. There are very few "rules" in YA. Well, maybe that's not as true as it was 5-10 years ago...but I think for the most part that still holds. One of the things that defines YA, though, is that it must be directly and specifically about the teen experience. And while that's fun and cool and all, it's nice to grapple with some more nuanced grown-up things.

Oddly, I think the gore factor is about the same...though I don't think I could have gotten away with exploding genitalia in YA.

TQ:  Describe Hope and Red in 140 characters or less.

TQ:  Tell us something about Hope and Red that is not found in the book description.

Jon:  It's can be pretty funny at times. Red and his mentor, Sadie, come from a gritty urban criminal underworld where everyone has a very...earthy sense of humor.

TQ:  What inspired you to write Hope and Red? What appeals to you about writing Fantasy?

Jon:  In general, fantasy was what I read the most as a kid. And I think it's safe to say that I mostly read it to escape the dreary confines of growing up middle class in the Midwest. I left fantasy when I was in college, deeming it not intellectual enough, or something pretentious like that. I let others tell me what to read. And that was fine for a while because I read a lot of amazing, challenging, and impactful literature. But when I decided to start writing seriously, I asked myself what it was I wanted to write, and I came back fairly quickly to fantasy. Partly because it's what made me fall in love with books and writing in the first place. But also because I realized that fantasy is not simply escapism. While getting swept away is a part of the pleasure, there is also this element of using the metaphor of fantasy to see things in our own lives from a fresh perspective.

More specifically, I was inspired to write Hope and Red as a palliative to the commercial pressures of writing YA fiction. I decided to write something totally for me. I wanted to make a world completely from scratch and fill it with all the things I loved best. Turns out, other people like those things, too!

TQ:  What sort of research did you do for Hope and Red?

Jon:  I love research. Maybe a little too much. I like to dive deep. So I did extensive research on naval and pirate tactics, particularly during the Napoleonic wars and the "golden age" of piracy. I researched the early history of New York City as a model for my own urban settings. I read a lot of samurai folklore, and of course the Bushido. I re-watched all my favorite kung fu films (what a hardship!), and I read as much wuxia as I could get my hands on, which is the source of a lot of kung fu storytelling.

TQ:  In Hope and Red, who was the easiest character to write and why? The hardest and why?

Jon:  Hope was probably the easiest, because she was always in my mind from the very first page. There was no story before Hope. She entered my mind, and everything else flowed from her. I tried my best to keep things balanced between her and Red, and I think I've succeeded. But way deep down, my heart belongs to Hope.

There is a character named Brigga Lin who goes through a significant transformation during the story, and I worked very hard to write about that as thoughtfully and sensitively as I could. Brigga Lin is an absolute delight to write, so it's not difficult exactly. But I feel a responsibility to handle it the right way.

Jon:  I didn't set out specifically to write about social issues. For example, when I mentioned to my friend Darren that Red's best friend in the book is gay, he just gave me a wry smile and said, "Write what you know, eh Jonny?" And that's really it. Race, gender, class, and orientation are simply aspects of my life. Family, friends, everyone around me is affected by them. These topics can be enriching or divisive, but they are always present. I see no reason why they wouldn't be present in a fantasy world. In fact, I think a world that didn't include a multitude of races, cultures, and beliefs would be terribly dull.

TQ:  Which question about Hope and Red do you wish someone would ask? Ask it and answer it!

A: My friend Ken Chen introduced me to the highly under-appreciated 1992 film The Swordsman II, starring Jet Li and Brigitte Lin. Jet Li is so young and fresh-faced, full of humor and heart. Brigitte Lin is simply devastating as the villain/love interest, with her deadly needle and thread form. The entire story is so outlandish, and yet it never feels forced. It's very...theatrical. Almost operatic. But with people getting torn in half and stuff.

TQ:  Give us one or two of your favorite non-spoilery quotes from Hope and Red.


“What is the child’s name?” asked Hurlo.

“She won’t say for some reason. I half think she doesn’t remember.”

“What shall we call her, then, this child born of nightmare? As her unlikely guardians, I suppose it is now up to us to name her.”

Captain Sin Toa thought about it a moment, tugging at his beard. “Maybe after the village she survived. Keep something of it in memory, at least. Call her Bleak Hope.”

Jon:  Next will be the second book in the Empire of Storms trilogy, Bane and Shadow. I'm not sure exactly when it's coming out, but my understanding is less than a year from now.

Jon:  It was my pleasure! Thanks for asking such thoughtful questions. 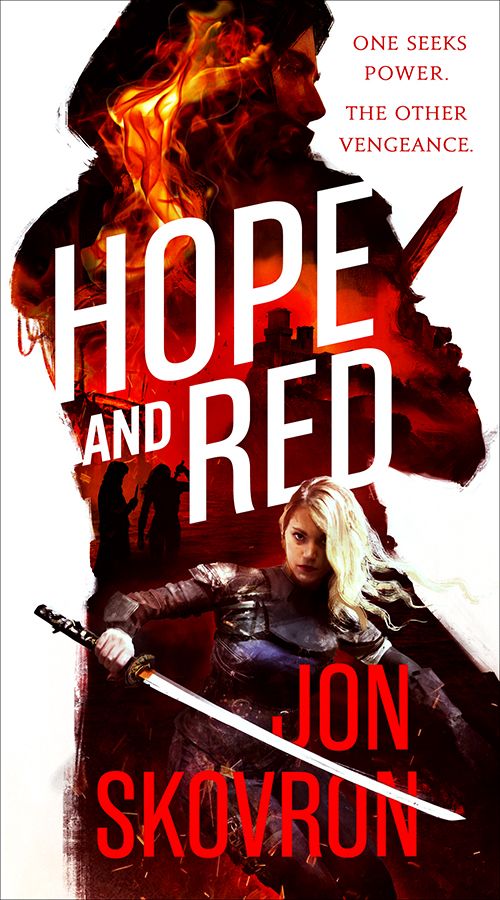 In a fracturing empire spread across savage seas, two people will find a common cause.

Hope, the lone survivor when her village is massacred by the emperor's forces is secretly trained by a master Vinchen warrior as an instrument of vengeance.

Red, an orphan adopted by a notorious matriarch of the criminal underworld, learns to be an expert thief and con artist.

TOGETHER THEY WILL TAKE DOWN AN EMPIRE.

Jon Skovron is the author of several young adult novels and his short stories have appeared in publications such as ChiZine and Baen's Universe. He lives just outside Washington, D.C. with his two sons and two cats. The Empire of Storms is his first adult fantasy series.