Please welcome Simone Zelitch to The Qwillery as part of the 2016 Debut Author Challenge Interviews. Judenstaat was published on June 21st by Tor Books. 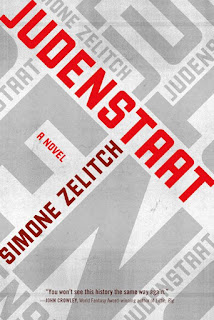 Simone:  When I was little, I wanted to be a dog-trainer, and then a psychiatrist, but at fourteen, I started filling notebooks Harriet-the-Spy style which was a way to both understand the very confusing world around me, and rewrite it. In a sense, you could say a writer is both a dog-trainer and a psychiatrist, at least when it comes to shaping a plot and understanding characters.

Simone:  I actually had to look those terms up. I’m a classic panster. Sometimes, I’ll make outlines or jot down notes, but I always lose them. Instead, I absorb history and location, and then just see where a story leads me à la up-a-trail-with-a-flashlight. It makes for a lot of stumbling, but it works, at least for me and gets me through a first draft. Of course, then I revise like a madwoman.

Simone:  At this point, the challenge is finding sustained time to get into the driven, obsessed frame of mind I need to produce battery-power to turn on that flashlight and wander up that trail. I teach at Community College of Philadelphia, and my students deserve every part of me.

Simone:  My own life and travels influence me, and too many authors to name, but in the case of Judenstaat, I need to give the big shout-out to George Orwell and in the case of everything else, James Baldwin, Leo Tolstoy, and Ursula K. Le Guin.

Simone:  This one was given to me by SF author Terry Bisson:

A widow stalks her husband’s assassin in a Jewish state carved out of Germany in 1948.

TQ:  Tell us something about Judenstaat that is not found in the book description.

Simone:  There’s a Stasi agent in it, and a very sweet and dogged Jewish mother. Also, it’s Nineteen-Eighty Four fan fiction not only thematically, but structurally. I even stole a crucial line. I hope Orwell’s estate won’t sue.

TQ:  What appeals to you about writing Alternative History?

Simone:  Alternative History messes with the concept of inevitability, and opens up space for raising questions about where we are now. I’ve just been re-reading Roth’s The Plot against America where the isolationist, racist fascist sympathizer Charles Lindbergh becomes president in 1940. Given present circumstances in this country, Oy Vey.

But alternative history doesn’t just raise political questions. It’s really about dislocation and instability. I love the moment in The Man in the High Castle when Mr. Tagomi somehow ends up in the “real” version of San Francisco, and it’s impossibly alien to the character and also to the reader. I’m kind of an Aspie, so to paraphrase Oliver Sacks, I like to make a reader feel like an anthropologist on Mars.

TQ:  What sort of research did you do for Judenstaat?

Simone:  I came in with a strong foundation in Zionist history from researching my novel Louisa, but the real challenge was overlaying that time-line with East Germany’s. It helped that I’d spent two years as a Peace Corps volunteer in Hungary during the early ‘90s, which gave me a sense of how Soviet-dominated countries like my imaginary Judenstaat responded to the end of the Cold War. Also early on, I went to the former East Germany and Israel, back-to-back, and focused on how each acknowledged its complicated history. Berlin is fantastic that way, FYI. Finally, I studied Yiddish in Vilnius and decided it was too wild and cosmopolitan to be the language of my country.

TQ:  I've read the "Judenstaat Historical Timeline" at your website (here) and it had me wondering - were there any talks/ideas in the 40s or earlier for the establishment of such a state in Europe?

Simone:  Not that I know of, given the way most post-Holocaust Jews thought about Europe—essentially as an enormous graveyard. But returning to my idea of countering inevitability, there were plenty of non-Palestine possibilities for a Jewish State including a British offer of Uganda, and Stalin’s “gift” of Birobidzhan (which was Yiddish-speaking by the way). There seemed to be a regular smorgasbord of Jewish states on offer, from a province of Australia to (as Chabon discovered) Sitka, Alaska.

However, there was absolutely a European movement to set Jewish roots in Europe prior to the Holocaust, the Bund, Jewish socialists who believed in the concept of Doykeyt, which can be translated as “Here-ness”. You make life where you are, and do it as a people with a national identity but without national borders. The Bundists spoke Yiddish, of course.

TQ:  In Judenstaat, who was the easiest character to write and why? The hardest and why?

Simone:  Minor characters are always easiest for me, and most colorful, particularly if they’re talkers. I love the way they appear and need to make sure they don’t take over. In that category, I’d put Judit’s professor, Anna Lehmann who is kind of a cross between Hannah Arendt and a battleship. She challenges all of Judit’s assumptions in an off-hand, cynical, grandmotherly way.

Judit, the book’s historian-widow heroine was hardest to write, probably because I felt too close to her; I couldn’t see her from the outside. Also, she sometimes doesn’t understand herself and her own motivations, and almost the entire book is from her point of view.

Simone:  I think a lot about official stories, and what gets left out of those stories. A Czech academic, Karl Deutsch, defined a nation as a group of people who agree to lie about the past. My novel’s very much about that concept of selective memory—which can certainly apply to any country, including my own (the U.S.A.).

TQ:  Which question about Judenstaat do you wish someone would ask? Ask it and answer it!

Question: Do you really think a Jewish State should have been established in Germany instead of Israel?

Answer: No, I don’t. Really. My book isn’t an endorsement. Things don’t work out all that well.

TQ:  Give us one or two of your favorite non-spoilery quotes from Judenstaat.


“My mother survived Auschwitz.”
Shaindel asked, “What’s that?”
Judit stopped walking [....] The black-hats believed that the slaughter was a consequence of Jews like Judit who had turned their backs on God. Maybe Shaindel’s ignorance was better than what someone might have taught her. Finally, Judit said, “Auschwitz was a camp.”
“Oh,” Shaindel said. She must have known that Judit had left something out of the story, but she didn’t pursue it. “Like an army camp. Where they train people.”
Now, the public bus passed by. Judit flagged it down and boarded before she had to say what people were trained to do.

And here’s one from Anna Lehmann as she tells her students about her own research into another alternative for a Jewish state, the Palestine experiment:


Anna Lehmann’s own argument—one that gained currency—was that the messianic element doomed the project from the start. “Messianic” wasn’t even her name for it. It was their own. Palestine-Jews believed that in returning to the land mentioned in the scriptures, they would become the agents of their own salvation.
“Are you the agents of your own salvation? Are you biblical prophets?” Lehmann addressed the eight students who sat on plush little stools and a big couch in her living room sipping tea from Meissen china [...]
“No, Grandmother Professor,” they all replied.
“Good,” she said. “Don’t be. Biblical prophets make terrible historians. They never bother with the past, and they always mistake the present for the future”.

Simone:  I’m hoping to finish a draft of a new book this summer, a take on Thomas Mann’s novel The Magic Mountain which examines a group in isolation, in my case in a fancy nursing home called The Hill. It’s a nifty concept, but a struggle to get right. Recently, discovering Kelly Link’s work made me realize the missing piece—oddly enough—was the magic. What if their fixation on their health and bodies became almost supernatural? I think I’ll have fun with it now. 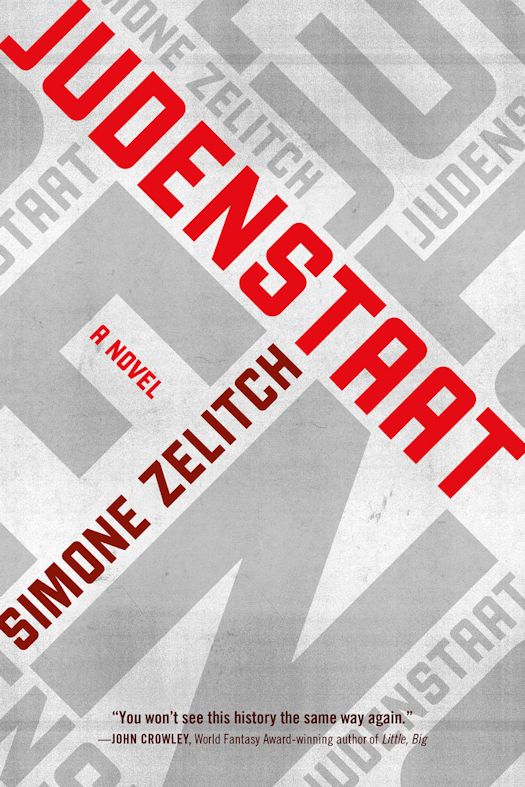 Simone Zelitch has created an amazing alternate history in Judenstaat. On April 4th, 1948 the sovereign state of Judenstaat was created in the territory of Saxony, bordering Germany, Poland, and Czechoslovakia.

Forty years later, Jewish historian Judit Klemmer is making a documentary portraying Judenstaat's history from the time of its founding to the present. She is haunted by the ghost of her dead husband, Hans, a Saxon, shot by a sniper as he conducted the National Symphony. With the grief always fresh, Judit lives a half-life, until confronted by a mysterious, flesh-and-blood ghost from her past who leaves her controversial footage on one of Judenstaat's founding fathers--and a note:

"They lied about the murder."

Judit's research into the footage, and what really happened to Hans, embroils her in controversy and conspiracy, collective memory and national amnesia, and answers far more horrific than she imagined.


Simone Zelitch is the author of three prior novels, including Louisa which won the Goldberg Prize for Emerging Jewish Fiction. Her work has been featured on NPR and recent honors include a National Endowment for the Arts grant.