Today is the publication day for the 7th and final novel in the Darkest London series by Kristen Callihan - Forevermore.  Read an excerpt and enter to win a copy below!

One might think being an immortal was a blessing, never grow old, never grow sick, never die. At one time in St. John Evernight’s life, he considered it a blessing too. He would be around long after the simple humans who surrounded him were nothing but dust. They could stare all they liked at his “strange” hair and frosty green eyes. They could gossip and speculate about him until they lost their voices. It didn’t matter. He was untouchable, and they were but fragile sacks of blood and bone.
How naive he’d been. Because living forever merely meant a lack of escape from the desolation of regret and loneliness. He knew now that he could walk down Jermyn Street endlessly, see the sands of time shift and rearrange before him, and never be a part of life.
“Brooding, Mr. Evernight?”
Sin almost jumped at the sudden sound of Augustus’s voice by his side. Damn, the blasted man loved to startle him. He gave Augustus a passing glance. Dressed in conservative brown tweed and a bowler hat, the angel appeared every inch the English gentlemen, save for his dark coloring that marked him to be from Southern climes.
“It’s really quite the trick, popping up like a soap bubble whenever you choose, Augustus. You must teach me how one day.”
The man’s mouth twitched. “With your luck, you’d pop up in the middle of a parliamentary session.”
Yes, Sin had abominable luck. Or perhaps it was more a matter of making abominable choices.
“You’re brooding again,” Augustus remarked.
“I’m not brooding. This is simply my face.”
Augustus snorted but remained silent as they walked along, past Trafalgar Square and down Whitehall.
“Care to tell me why you called me here?” Sin asked, when they came upon the grounds of Westminster. For the past year, Sin had been in Rome, soaking in the warmer temperatures, drinking espresso in cafes along the Piazza della Rotunda, under the shade of the ancient Pantheon. He’d eaten simple but delicious food, and listened to the rapid fire of Italian, and felt…well, not peace, but a measure of contentment.
Until Augustus had sent for him. Returning to England sat like a stone in his gut. But he would obey. Augustus was his mentor, and the man who’d given him salvation. The price was a lifetime of servitude. To be fair, his role was for justice, not evil, which was a nice change of pace.
A massive dray rattled past, kicking up dust and sending a fug of stale manure into the air. They hurried past the cloud and headed for Westminster Abbey. Sin hadn’t planned on visiting today, but here they were all the same. He wondered if Augustus somehow had led him to their usual meeting place or if Sin had merely headed that way because of the man’s sudden arrival.
He’d like to think the latter. It did not sit well with him having another control his actions. Not since a certain evil fae had kept Sin as a blood slave for years. Even now, the memory made his stomach turn.
Not a soul acknowledged them as they walked through the abbey and into the cloisters. Here, a rare bit of sunlight peeked through the constant cloud cover and cast lacy shadows along the walkway. The sound of their boot heels clacked out a steady rhythm as they strolled along.
“Layla returns to London tonight.”
At the mention of her name, Sin’s heart stilled within his breast. He’d tried his best to ward off all finer feelings, to remain numb, detached from life. And yet he could not, for the life of him, remain immune to Layla Starling. His childhood friend. The one woman who could take his breath, his reason, simply by laying eyes upon her.
Stuffing his shaking hands into his trouser pockets, Sin forced himself to keep an even tone. “So then I am to begin watching over her?”
God, but he did not want to. It would be agony, staying so close to her and never being allowed to show his true feelings. And yet a thrum of anticipation went through him at the mere prospect of seeing Layla once more.
“Are you ready?” Augustus asked, though his expression told Sin he fully expected an affirmative answer.
So Sin told him the only truth left to him. “I will not fail her.” 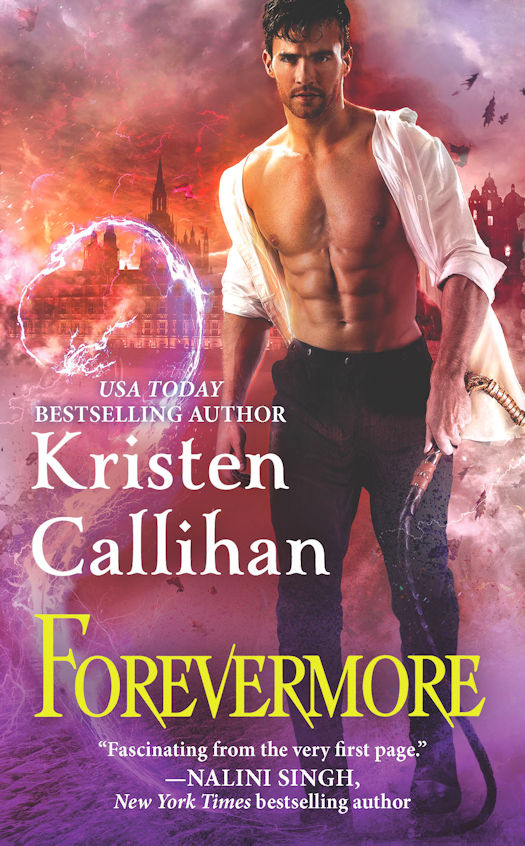 Isolated and alone, Sin Evernight is one of the most powerful supernatural creatures in heaven and on earth. As an angel of vengeance, he hunts down the darkest evil, but when his long-lost friend, Layla Starling, needs him, he vows to become her protector. Even though she will be horrified by the man he has become.

Now a famous singer and the toast of London, Layla believes that Sin is only here to guard her from rabid fans and ardent suitors. However, the truth is far more sinister. Desperate to avoid losing Layla a second time, Sin will face a test of all his powers to defeat an unstoppable foe - and win an eternity with the woman he loves. 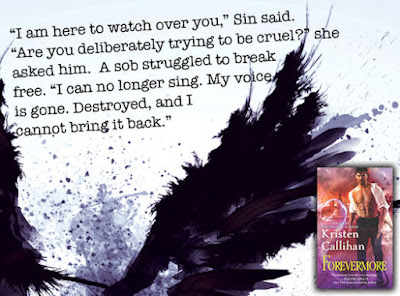 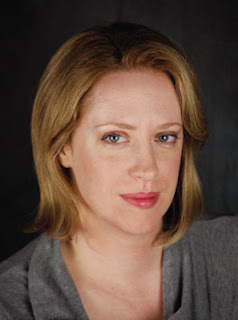 USA Today bestselling author Kristen Callihan is a writer because there is nothing else she'd rather be. She is a three-time RITA nominee and winner of two RT Reviewers' Choice awards. Her novels have garnered starred reviews from Publishers Weekly and Library Journal, as well as being awarded top picks by many reviewers. Her debut book, Firelight, received RT Book Reviews' Seal of Excellence, was named a best book of the year by Library Journal, best book of Spring 2012 by Publisher's Weekly, and was named the best romance book of 2012 by ALA RUSA. When she is not writing, she is reading. 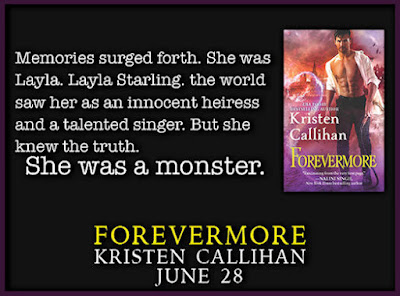 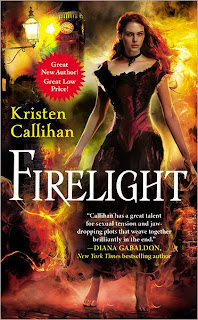 London, 1881
Once the flames are ignited . . .
Miranda Ellis is a woman tormented. Plagued since birth by a strange and powerful gift, she has spent her entire life struggling to control her exceptional abilities. Yet one innocent but irreversible mistake has left her family's fortune decimated and forced her to wed London's most nefarious nobleman.

They will burn for eternity . . .
Lord Benjamin Archer is no ordinary man. Doomed to hide his disfigured face behind masks, Archer knows it's selfish to take Miranda as his bride. Yet he can't help being drawn to the flame-haired beauty whose touch sparks a passion he hasn't felt in a lifetime. When Archer is accused of a series of gruesome murders, he gives in to the beastly nature he has fought so hard to hide from the world. But the curse that haunts him cannot be denied. Now, to save his soul, Miranda will enter a world of dark magic and darker intrigue. For only she can see the man hiding behind the mask. 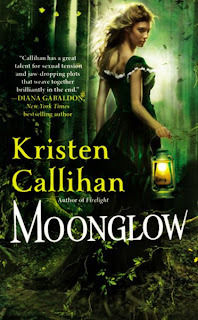 Once the seeds of desire are sown . . .
Finally free of her suffocating marriage, widow Daisy Ellis Craigmore is ready to embrace the pleasures of life that have long been denied her. Yet her new-found freedom is short lived. A string of unexplained murders has brought danger to Daisy's door, forcing her to turn to the most unlikely of saviors . . .

Their growing passion knows no bounds . . .
Ian Ranulf, the Marquis of Northrup, has spent lifetimes hiding his primal nature from London society. But now a vicious killer threatens to expose his secrets. Ian must step out of the shadows and protect the beautiful, fearless Daisy, who awakens in him desires he thought long dead. As their quest to unmask the villain draws them closer together, Daisy has no choice but to reveal her own startling secret, and Ian must face the undeniable truth: Losing his heart to Daisy may be the only way to save his soul. 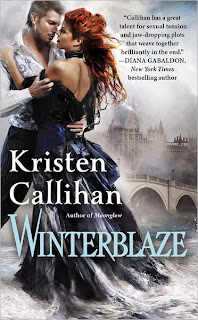 Once blissfully in love . . .
Poppy Lane is keeping secrets. Her powerful gift has earned her membership in the Society for the Suppression of Supernaturals, but she must keep both her ability and her alliance with the Society from her husband, Winston. Yet when Winston is brutally attacked by a werewolf, Poppy's secrets are revealed, leaving Winston's trust in her as broken as his body. Now Poppy will do anything to win back his affections . . .

Their relationship is now put to the ultimate test.
Winston Lane soon regains his physical strength but his face and heart still bear the scars of the vicious attack. Drawn into the darkest depths of London, Winston must fight an evil demon that wants to take away the last hope of reconciliation with his wife. As a former police inspector, Winston has intelligence and logic on his side. But it will take the strength of Poppy's love for him to defeat the forces that threaten to tear them apart. 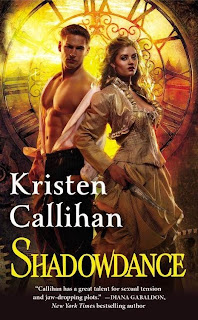 Once a heart is lost in shadow . . .
Life has been anything but kind to Mary Chase. But the Society for the Suppression of Supernaturals has given her purpose. Now she's been tasked with catching a vicious murderer dubbed the Bishop of Charing Cross. But someone is already on the case-and the last thing he relishes is a partner.

Only someone who lives in darkness can find it.
Jack Talent has been alone with his demons for many years.
He never expected to have the willful Mary Chase assist him on the Bishop case. Their age-old rivalry reaches new heights-even as their desire for one another reaches a fever pitch. Though he aches to bring her close, Jack's dark secrets are a chasm between them. With dangerous enemies closing in, Jack must find the strength to face the past . . . or risk losing Mary forever. 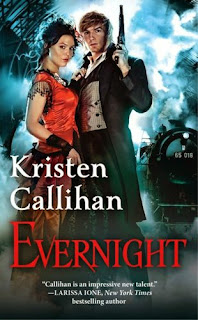 Once the night comes . . .
Will Thorne is living a nightmare, his sanity slowly being drained away by a force he can't control. His talents have made him the perfect assassin for hire. But as he loses his grip on reality, there is no calming him-until he finds his next target: the mysterious Holly Evernight.

Love must cast aside the shadows
Holly cannot fathom who would put a contract on her life, yet the moment she touches Will, the connection between them is elemental, undeniable-and she's the only one who can tame his bouts of madness. But other assassins are coming for Holly. Will must transform from killer to protector and find the man who wants Holly dead . . . or his only chance for redemption will be lost. 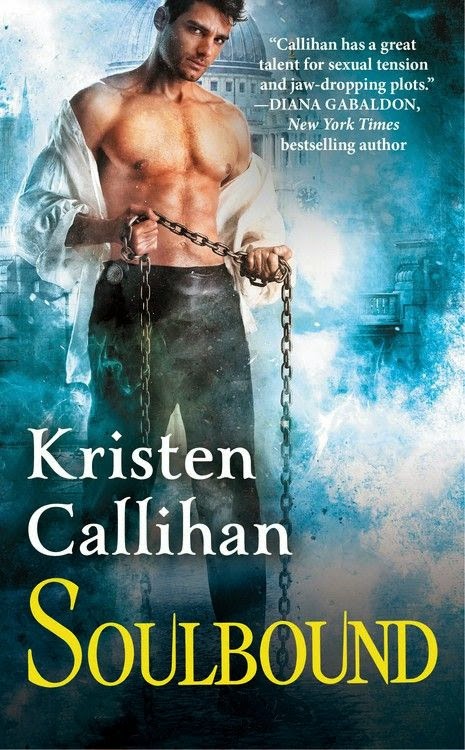 Once two souls are joined . . .
When Adam's soul mate rejected him, there was more at stake than his heart. After seven hundred years of searching, his true match would have ended the curse that keeps his spirit in chains. But beautiful, stubborn Eliza May fled-and now Adam is doomed to an eternity of anguish, his only hope for salvation gone . . .

Their hearts will beat together forever
No matter how devilishly irresistible Adam was, Eliza couldn't stand the thought of relinquishing her freedom forever. So she escaped. But she soon discovers she is being hunted-by someone far more dangerous. The only man who can help is the one man she vowed never to see again. Now Adam's kindness is an unexpected refuge, and Eliza finds that some vows are made to be broken . . .