Interview with Rachel Dunne, author of In the Shadow of the Gods


Please welcome Rachel Dunne to The Qwillery as part of the 2016 Debut Author Challenge Interviews. In the Shadow of the Gods was published on June 21st by Harper Voyager. 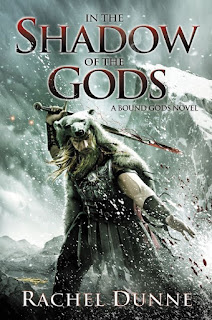 Rachel:  I’ve been writing since I was a kid, always telling or scribbling down stories. I never really had a choice in being a writer—it’s just been something I’ve needed to do, and something that makes me incredibly happy.

Rachel:  I’m a hybrid, only because I realized with this book that my usual pantsing wasn’t going to work. I outline chapters, give myself a concrete starting or ending point for each chapter, and then let the whole journey and all the details emerge as I’m writing.

Rachel:  Not writing ahead in my mind! I’m constantly thinking through plot points and events, and a lot of times I’ll find myself writing whole scenes in my head—which sounds great, except that it triggers my brain to think I’ve already written that scene, so when I have to go actually write the words down, writing the scene feels almost boring. As much as I can, I’ve trained myself to stop mentally writing ahead; now, if I get a great scene idea or an awesome line, I write it down quick and then force myself to stop thinking about it until I can actually dedicate some real time to writing. Usually, the few jotted lines are enough to kick my brain back into the mindset that triggered the thought, and I can write the full scene without it feeling like a chore.

Rachel:  Reading, of course—I’ve been an obsessive reader all my life, and I’m constantly reading anything and everything. I think most stories are a mishmash of ideas pulled from other stories, bits and pieces rearranged in new and interesting ways. It’s wonderful to be reading something completely out of the norm for me, like mysteries or mindless celebrity gossip, and to find a piece of that—some twist or a quote or a tertiary character—that just clicks, and suddenly becomes a potential plot piece for my gritty epic fantasy. It feels like its own kind of magic.


TQ:  Describe In the Shadow of the Gods in 140 characters or less.

No wait, let me try again: When the gods make war, people become the pawns—but pawns don’t always move in ways you’d expect. The pawns can have minds of their own...

TQ:  Tell us something about In the Shadow of the Gods that is not found in the book description.

Rachel:  There’s a lot of struggling with identity for the various characters, with the idea of fate—is it possible to escape your past, to become someone different than the person everyone else thinks you are? All of the point of view characters struggle with this at some point during the book, if not throughout, and this (hopefully!) adds a layer of depth and realism.

TQ:  What inspired you to write In the Shadow of the Gods? What appeals to you about writing Fantasy in particular Dark Fantasy?

Rachel:  Fantasy has always been my favorite genre. I’ve spent most of my life devouring fantasy books, so writing my own was a no-brainer. I love the grittiness in dark fantasy, the way you can turn old tropes on their heads to make something fresh…but I also love the beautiful, lyrical language and introspection you can find in high fantasy. I wanted to bring those two ends of the fantasy spectrum together, and In the Shadow of the Gods is the result of that: something both gritty and beautiful.

TQ:  What sort of research did you do for In the Shadow of the Gods?

Rachel:  I had to do some research on deserts for one of the sequences in the book, and even though the desert is only a setting for a handful of pages, I got really into that research. In general, settings are what I do most of my research on—I want all of my settings to feel real, and that starts with at least getting the basics right. I also did a fair amount of research on eye wounds—not a fun time, since eyes make me pretty squeamish.

Rachel:  Scal is definitely the easiest—out of all the point-of-view characters, he’s the one that’s been lurking in my mind for the longest, so I feel like I know him best. His chapters just flow Plus, his voice is just plain fun to write. Joros is probably the hardest to write, because he’s a very different character than the other three points of view—Scal, Rora, and Keiro are all generally good people trying to do the right thing, but Joros…is kind of a bastard. He doesn’t have that nice, do-good core to him, so I need a totally different mindset when writing him.

TQ:  Which question about In the Shadow of the Gods do you wish someone would ask? Ask it and answer it!

Rachel:  “How do you deal with having multiple point of view characters?” The key is in the voice—my goal from the start was to make each of my characters sound different and distinct, so that even without any name cues the reader would be able to tell whose chapter they were reading within the first few sentences. I played around with so many styles before settling on the current four voices, and that in itself was a ton of fun.

TQ:  Give us one or two of your favorite non-spoilery quotes from In the Shadow of the Gods.

“The words were trapped in him. Hard in his throat. So many things in all his lives he had never said. Too late, now. Always too late. There was a breaking here. A fracture in a slab of ice, spidering slowly but unstoppably outwards. There was an ending waiting for him, somewhere.”

“It was much like how he imagined things would be if he returned to his family’s home. Disgust and disappointment from both sides, and an excess of sullen glares. At least in the villages, Joros wasn’t causing his sisters to cry.”

Rachel:  I recently turned in the manuscript for the sequel, so I’ll be working with my editor on that over the next few months. At the same time, I’ll be writing the third and final book in the series, which is both exciting and terrifying!

Rachel:  Thanks so much for having me! 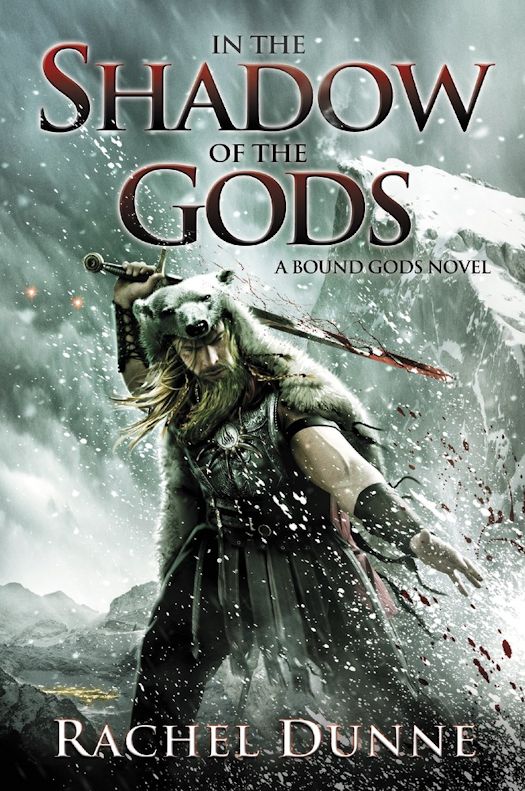 A breathtaking talent makes her debut with this first book in a dark epic fantasy trilogy, in which a mismatched band of mortals led by a violent, secretive man must stand against a pair of resentful gods to save their world.

Eons ago, a pair of gods known as the Twins grew powerful in the world of Fiatera, until the Divine Mother and Almighty Father exiled them, binding them deep in the earth. But the price of keeping the fire lands safe is steep. To prevent these young gods from rising again, all twins in the land must be killed at birth, a safeguard that has worked until now.

Trapped for centuries, the Twins are gathering their latent powers to break free and destroy the Parents for their tyranny—to set off a fight between two generations of gods for control of the world and the mortals who dwell in it.

When the gods make war, only one side can be victorious. Joros, a mysterious and cunning priest, has devised a dangerous plan to win. Over eight years, he gathers a team of disparate fighters—Scal, a lost and damaged swordsman from the North; Vatri, a scarred priestess who claims to see the future in her fires; Anddyr, a drug-addled mage wandering between sanity and madness; and Rora and Aro, a pair of twins who have secretly survived beyond the reach of the law.

These warriors must learn to stand together against the unfathomable power of vengeful gods, to stop them from tearing down the sun . . . and plunging their world into darkness.

Living in the cold reaches of the upper Midwest with her great beast of a dog, Rachel Dunne has developed a great fondness for indoor activities. For as long as snow continues falling in Wisconsin, she promises to stay inside and keep writing.

Her first novel, In the Shadow of the Gods, was a semi-finalist for the 2014 Amazon Breakthrough Novel Award, and will be published by Harper Voyager in June of 2016. Its two sequels will follow.