Please welcome H.P. Wood to The Qwillery as part of the 2016 Debut Author Challenge Interviews. Magruder's Curiosity Cabinet was published on June 7th by Sourcebooks Landmark. 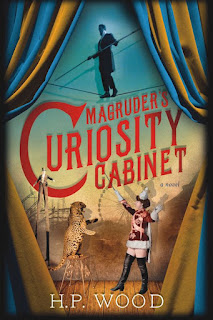 H.P. Wood:  Thank you! I’ve enjoyed writing for as long as I can remember. I use it as a way to think things over (friends who suffer through my lengthy emails can confirm). In college I had a job teaching writing to other students, but I didn’t think about being a writer. Then I became a book editor but I basically thought of writing as something other people did. It was only about 8-10 years ago that I said, hey wait a second….

HPW:  I try to have a few scenes or moments in mind that I want to get to—that I kind of write towards. But mainly I stand with pantsers (also panthers; thanks, autocorrect).

I have no beef with plotters. Writing is hard, do whatever works! But for me it’s like, yeah, let’s wander down that bramble-y path and see what happens. Is it efficient? Nope. But how will I know what’s possible if I hang back in the safety of the clearing?

Structure is important, but for me it comes later. Rewrites turn random wanderings into clearly marked hiking trails. The trick is, you can rewrite over and over until you find your way… but the reader will never know how long you spent lost. (In the case of Magruder's, years!!)

HPW:  There are times when a particular scene just needs to exist for plot reasons: X needs to occur so that Y and Z can follow. I know how that moment needs to function and what the characters shouldzzzzzzzzz….. see I just fell asleep thinking about it.

When I know too much about what I’m about to write, I lose interest in writing it. Basically I am a toddler who wants to throw ideas around the room but doesn’t care to clean up after.

HPW:  Written influences? Oh gosh.… Mother Night. We Have Always Lived in the Castle. Blindness. Rosencrantz and Guildenstern Are Dead. Song of Solomon. The World According to Garp. The Westing Game. “It!” (Sturgeon). Orestes 2.0. Metropolitan Life. Confederacy of Dunces. One Hundred Years of Solitude. “Incarnations of Burned Children.” American Gods. Endgame.

Other influences: Bertolt Brecht. Tina Fey. Joe Strummer. RuPaul. Hoppy IPAs. The corner of West 4th and West 10th, because it reminds me that life is fundamentally absurd.

HPW:  When I read this question, the first thing I thought of was Amy Poehler inventing her own lyrics to “We Didn’t Start the Fire.” So I’m going with it.

TQ:  Tell us something about Magruder's Curiosity Cabinet that is not found in the book description.

HPW:  [whisper] The pretty white girl described on the jacket is not the most important character.

TQ:  What inspired you to write Magruder's Curiosity Cabinet? What appealed to you about writing a novel set in turn-of-the-century Coney Island? What is a curiosity cabinet?

HPW:  I read an entry in a book called The People’s Almanac about a mother and daughter in Paris in 1900. The mother got sick and the hotel disappeared her, to hide the fact that she had the plague. But I kept thinking about the daughter. Where’d she go? What’d she do? The only way I’d get answers was to write them myself. I used to hang out at Coney a lot when I was in my 20s, so I relocated the story. Off I went into the aforementioned brambles to discover what happened next.

TQ:  What sort of research did you do for Magruder's Curiosity Cabinet?

HPW:  There are tons of photos and even a little bit of film from Coney in the early 1900s, so that was super-helpful. But mainly it was reading reading reading and then more reading: about sideshows, plagues, quarantines, all kinds of fun stuff.

Most influential to me was material not just about the time but of the time. Sister Carrie by Theodore Dreiser. A 1904 visitor’s guide to Coney. News coverage of bubonic plague in San Francisco. Etc. The reason Zeph is reading W.E.B. DuBois is because I was reading DuBois and I fell in love with him. (BTW, I’ve got a bibliography at hpwood.net if you’re interested.)

TQ:  In Magruder's Curiosity Cabinet who was the easiest character to write and why? The hardest and why?

HPW:  I’m having trouble answering “hardest” because I spent 5 years on this book so I feel like all the characters are my pals at this point. But certainly the character of Zeph took the most preparation—he’s the son of Tennessee sharecroppers who lost his legs in an accident and was sold to a sideshow… Of all the characters, his life is the most profoundly different from mine in the largest number of ways.

Easiest has got to be Archie the con man, because I could just write as many jokes as I wanted! Archie is my id: any mean, selfish, or just obnoxious thing I thought of, I gave to him to say.

TQ:  Why have you chosen to include social issues in Magruder's Curiosity Cabinet?

HPW:  Any time you are writing about sideshows you are, by definition, writing about difference. You’re writing about the Other. The politics are baked in, so the only question is, are you going to run away from that or towards it…. and I went in headfirst.

TQ:  Which question about Magruder's Curiosity Cabinet do you wish someone would ask? Ask it and answer it!

HPW:  In all candor, the question I most want to be asked is: “Will you allow Joss Whedon to turn Magruder’s into a movie/TV series/Broadway musical/virtual reality ride/mobile app/private show at his house???”

TQ:  Give us one or two of your favorite non-spoilery quotes from Magruder's Curiosity Cabinet.

HPW:  “The little folk stare balefully at the Brooklyn prince reduced to pleading in the street. They can’t help but enjoy saying no to someone who’s enjoyed such a glittering lifetime of yes.”

HPW:  I just finished the draft of a kids’ book about different types of con artists called Fakers. In a certain way, it’s a nonfiction version of Magruder’s.

I’m also working on another novel. There are monsters. The monsters bust up a bunch of stuff. I’ll say this much: that reviewer who counseled me to “find a less dark subject to entertain readers” is going to be pretty f***ing disappointed.

[If you want to keep informed, maybe follow me on one of them social media thingamajigs…I’m @hilarywrites on the tweeter and HPWoodWriter on the FB.]

HPW:  It was a pleasure. You are my first-ever interview, so how do you like them apples? Thanks for everything you do for books! 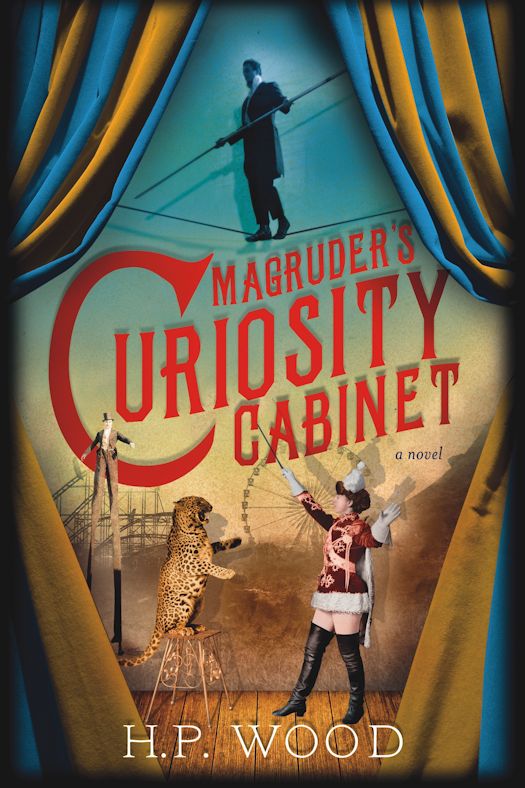 A hypnotic debut in turn-of-the-century Coney Island, where an abandoned girl collides with a disgruntled ménage of circus freaks.

Kitty Hayward and her mother are ready to experience the spectacles of Coney Island’s newest attraction, the Dreamland amusement park. But when Kitty’s mother vanishes from their hotel, she finds herself penniless, alone, and far from her native England. The last people she expects to help are the cast of characters at Magruder’s Curiosity Cabinet, a museum of oddities. From con men to strongmen, from flea wranglers to lion tamers, Kitty’s new friends quickly adopt her and vow to help find the missing Mrs. Hayward. But even these unusual inhabitants may not be a match for the insidious sickness that begins to spread through Coney Island…or the panic that turns Dreamland into a nightmare.

With shades of Water For Elephants and The Museum of Extraordinary Things, Magruder’s Curiosity Cabinet sweeps readers into a mesmerizing world where nothing is as it seems, and where “normal” is the exception to the rule.

H.P. Wood is the granddaughter of a mad inventor and a sideshow magician. Instead of making things disappear, she makes books of all shapes and sizes. She has written or edited works on an array of topics, including the history of the Internet, the future of human rights, and the total awesomeness of playing with sticks. She lives in Connecticut with a charming and patient husband, a daughter from whom she steals all her best ideas, and more cats than is strictly logical. You can find her at hpwood.net.