I think I am going to re-name this post Melanie's Week Reading Self Published Fantasy for the #SPFBO2016. Reading for the blog off and being depressed over the referendum result took up almost my whole week.  So what did I read and what did I think?

I am going to start with the book I liked the most out of the four I read this week. Call of Kythshire tells the story of the young Azaeli who has trained for years to become one of the knight of the King's elite guard. After a fairly simple mission goes wrong with tragic results Azaeli is determined to solve the mystery that threatens to destroy the peace that the kingdom has enjoyed for centuries. Travelling with her on this quest is her best friend the mage apprentice Rian and a teeny tiny fairy called Flitt.

I thought that Missy Sheldrake had written a compelling story for a specific age group  - specifically 12-14 year olds. While I have enjoyed fantasy for younger readers I found that Azaeli and friends were just a bit immature and the plotline a bit too 'cheesy'. I didn't feel it was helped by Sheldrake's illustrations that were included at the end of several chapters. Normally, I like a few illustrations but I just found the ones in Call of Kythshire a bit too cartoonish to enhance the story. Overall, Sheldrake's story was well written and she is skilled at world building. I think this book would be a big hit with tweenies.

If you like fairy tales with a twist then The Seventh Magpie by Nancy Chase is the book for you. Princess Catrin is given a bejewelled book by her mother right before her father sends her away to live in a monastery to grow up. Her mother warns her never to lose the book or she will die. It doesn't take much to guess what happens next - Princess Catrin loses the book (although several years later). Desperate to avoid her fate she embarks on a quest to solve 7 riddles to uncover the seventh magpie. With every riddle Catrin has to risk a bit more and sacrifice a bit more....but is it really worth it? I will leave this with you to decide.

I really enjoyed the riddles the magpie sets for Catrin. They were really hard and the journey that Catrin undertakes is epic indeed. Chase crafted a superb fairy tale but I won't say this is an easy read. Catrin is very much the helpless, innocent who needs a man to come save her and I don't think that her parents exhibited that much in the way of parenting skills. All in all it was a good read right up until the ending which I thought was a let down.

Book 3 was The Curse of the Zwilling by Don Sakers which was set in a small town university. After the death of one of the teachers it is left up to a grad student and 4 other students to figure out what has happened and why a malevolent force is after the Department of Comparative Religion's magical artifacts. Enter David and his Scooby gang to solve the mystery and protect their community against the Zwilling.

This may sound harsh but The Curse of the Zwilling is one of those books that it is evident why it was self published. After a rather dramatic first chapter or two the story descends into verbose dialogue, poor characterisation and some rather ridiculous plot points. This is one of those stories that I was pretty convinced the author used a thesaurus to help them. For example, a teenager doesn't clench their 'viscera' - clench their stomach maybe but viscera - no way! To budding authors who want to self publish please do your research and if you need to veer from traditional explanations for events (such as traditional werewolf lore) then please make sure they make sense. This was pretty close to a DNF for me but I preserved but did a lot of skim reading, I will confess. 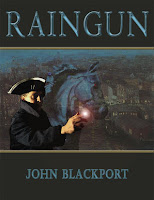 In Raingun Rick Rivoire is one of the magical elite cavalry who can conjure horses made out of smoke. Rick finds that he cannot justify protecting the aristocracy who support slavery and tyranny however, he is determined to emulate the brave soldier Temez who saved him when he was a young boy. Raingun is largely about Rick's fight with his own conscience as much as is a fight against monsters and evil.

I was really drawn into this story in the first two - three chapters. Blackport created an interesting world with the Raingun, the smokemares and people who lose one of their 'gifts' when they reincarnate. Unfortunately, Blackport wasn't able to keep my attention for the duration of the story and I felt it really dragged. Blackport attempted to make Rick well rounded as a character by going back into his past and telling the story of how he became a Raingun after he was was saved by Temez when he was just a boy. I wish that Blackport had chosen to do this chronologically as it was really disjointed to go forward and back in time without there being a triggering event. Overall, this was a book with a number of great concepts but it just wasn't executed in a very interesting way.

My final book in my week of self published fantasy was The Lament of Sky by B.B. Wynter. Unfortunately, this is one of my very few DNFs. I really tried to get involved in this story but it was far to convoluted and confusing. Even a few chapters in I still had no clue what was going on or who any the characters were. I found myself having to re-read the first couple of chapters a few times in an attempt to figure it out and when I couldn't I gave up. Sorry folks, this doesn't happen very often.

That is it for me this week. Wish me luck with the remaining books of SPFBO2016. Until next week Happy Reading.