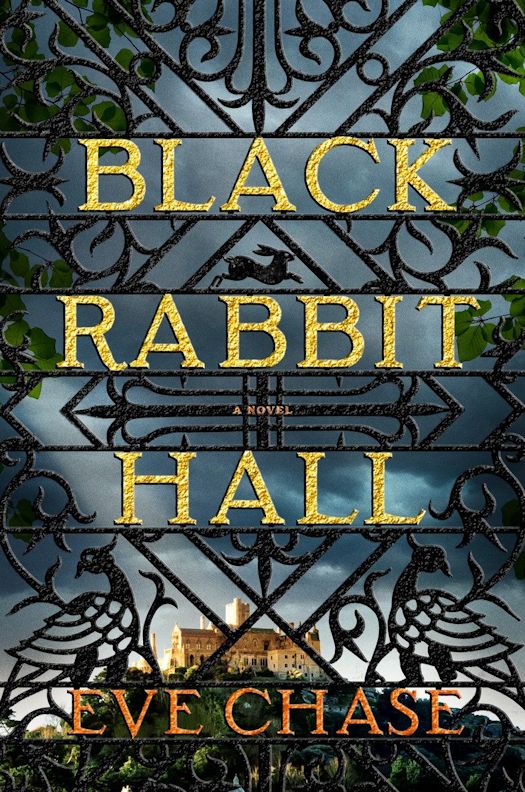 Amber Alton knows that the hours pass differently at Black Rabbit Hall, her London family’s country estate, where no two clocks read the same. Summers there are perfect, timeless. Not much ever happens. Until, of course, it does.

More than three decades later, Lorna is determined to be married within the grand, ivy-covered walls of Penraw Hall, known as Black Rabbit Hall among the locals. But as she’s drawn deeper into the overgrown grounds, half-buried memories of her mother begin to surface and Lorna soon finds herself ensnared within the manor’s labyrinthine history, overcome with an insatiable need for answers about her own past and that of the once-happy family whose memory still haunts the estate.

Black Rabbit Hall, a not-quite-so-grand estate situated on a windswept cliff along the Cornish coast, is the true star of this Gothic by Eve Chase. Blurbs for Black Rabbit Hall enthusiastically invoke the name Daphne du Maurier, which is mighty praise and quite a lot to ask of a debut novel. It may not be Rebecca, but Black Rabbit Hall stands on its own merits, elevated by Chase’s strong voice and deft storytelling ability.

The book tells two tales. Amber Alton’s story begins in the late 1960s as her parents, her twin brother Toby, and much younger siblings Barney and Kitty, spend their lazy summers at Black Rabbit Hall, swimming, riding, and sunning. On the surface, they are an average family, and Amber is preoccupied with school and friends and boys like most fourteen year old girls. A sudden tragedy upends their lives and reveals the troubled side of several members of the family. Profoundly affected by loss, young Amber fights to protect her loved ones from a terrible chain of events that is not within her power to control.

Lorna Dunaway’s story is dated more than 30 years later. While planning her wedding with her fiancé Jon, she comes across an advertisement for Black Rabbit Hall and is drawn to the property for reasons she doesn't understand. Her recently deceased mother had taken her on childhood holidays to an estate in Cornwall, but she isn't certain this is the same place. An overnight stay at the estate does not go exactly as she plans, but she manages to unearth the property’s dark history and comes to understand why it haunts her.

The book had a slow start for me, with the chapters weaving back and forth between Amber and Lorna. Both stories feature plot twists and their endings were not entirely predictable. Of the two stories, I was far more invested in Amber’s tale. It felt more lovingly told and imbued with bittersweet true-to-life emotion. Lorna’s story was a bit more convoluted, but was still an interesting companion tale with a tied-off ending.

Chase makes masterful use of the descriptive language of the Gothic, evoking emotions through threatening weather, creaking floorboards in inky black hallways, and the sensory rush of a wardrobe full of familiar clothes carrying the faint scent of a beloved relative gone too soon. The characters, many in number for the two complete stories, were impressively well-rounded and ranged from delightful to “I hope you catch your toe on a rock while walking the cliff.”

I think it says a great deal about Chase’s talent that I was actually shouting “no!” at each point-of-view transition, reluctant to leave the action behind and move on with the other storyline. In spite of the subdued beginning, Black Rabbit Hall blossomed into a page turner, worthy of the accolades it's received. This is one of those books that deserves a second read-through to appreciate the craftsmanship in character, language, and construction. Eve Chase has earned a solid spot on my to-watch list.

Highly recommended for fans of the Gothic, or anyone who loves a good damp and drafty manor with out of sync clocks and skeletons both inside and outside the closets.