Retro Reviews: A Princess of Mars by Edgar Rice Burroughs 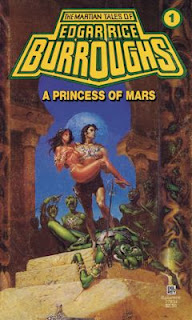 Edgar Rice Burroughs was born in Chicago, IL on September 1, 1875 and died in Encino, CA on March 19, 1950. His father was a civil war veteran. In 1911, Burroughs was working as a pencil-sharpener wholesaler when he began to write fiction. In 1912, Burroughs had his first story, Under the Moons of Mars, serialized in The All-Story magazine from February to July 1912. Tarzan is his most famous character with John Carter close behind. Burroughs has written over 80 books in many different genres, including Science Fiction, Adventure, Westerns, Romance and even Historical. Ray Bradbury said of Burroughs in The Paris Review Spring 2010 No. 192, “I love to say it because it upsets everyone terribly—Burroughs is probably the most influential writer in the entire history of the world. By giving romance and adventure to a whole generation of boys, Burroughs caused them to go out and decide to become special. That’s what we have to do for everyone, give the gift of life with our books.”

A Princess of Mars was originally published as a serial in the February-July 1912 issues of All-Story Magazine under the title of Under the Moons of Mars. Burroughs was influenced in his portrayal of Mars by the astronomer Percival Lowell. On October 10, 1917, the first book edition was printed by A.C. McClurg. The book is now in public domain in the United States.

A World to Conquer.

Suddenly projected to Mars, John Carter found himself captive of the savage green men of Thark. With him was Dejah Thoris, lovely Princess of Helium. And between them and rescue lay a thousand miles of deadly enemies and unknown dangers.

This is the second book I've read and reviewed by Edgar Rice Burroughs. I'll be honest I was a little nervous to read it. I wanted to like it and I've heard so many people say how wonderful it was that I was afraid it wouldn't live up to my expectations. So, for you, dear readers, I conquered my fears and read A Princess of Mars.

Burroughs does a splendid job of developing characters for a such a short book and considering its time frame. John Carter is a man of principles and doesn't falter from standing up for what's right. He also shows tact and patience in his affections towards Dejah. Even the green martians show depth and evolution as the story progresses. Tars Tarkas and Sola show very little in their relationship at the beginning of the story, but their relationship becomes much more complicated as secrets are revealed.

The world building shows depth and is revealed in such a way that it truly makes the world feel old and on the brink of extinction. Burroughs introduces several different alien flora and fauna. He also takes time to explain the differences between the green and red martians by color and within their own respective groups. It shows a great deal of detail for such a short book.

The pacing was a lot faster than I expected but not as fast as modern books. However, I wasn't bothered or bored since Burroughs did a wonderful job keeping my attention through the story. The fact that there's so many different genres within one book, like western, science-fiction, romance, and adventure, also helped to keep my attention.

A Princess of Mars lives up to all it praise and history. I would call it a foundation stone to the genre. It made me giddy and happy as I became immersed in the pulp. I'd recommend this book to youth and adults. There is minor violence. I'd recommend you buy a copy. It truly is one of the pioneer texts in the science fiction genre and should be read and owned by anyone who professes a love of  science fiction.


Favorite quote from the book

“God help the coward, for cowardice is of a surety its own punishment.” page 7