Interview with Sabrina Benulis, author of The Books of Raziel 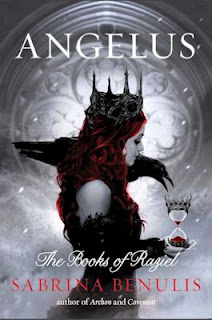 TQ:  Welcome back to The Qwillery. Your new novel, Angelus (Books of Raziel 3), is published on February 9th. Has your writing process changed (or not) from when you wrote Archon (2011) to Angelus? What is the most challenging thing for you about writing?

Sabrina Benulis:  Hello, and thank you again for taking the time to interview me! It's hard for me to believe it's been a few years since I wrote Archon. Of course, in answer to your question, my writing style has evolved. But it's mainly a matter of perspective now. I've learned a few tricks and methods from being observant about other books I read, but on the whole, I'm just much less demanding of myself now. I'm a perfectionist, and it's taken me a while to relax when it comes to whatever mistakes I might make. I think that is the most challenging thing about writing, actually. We can be too critical of ourselves, and fearful of readers, and it can paralyze us as writers. The most important thing you can do as a writer is to tell your story as best you can. In the end, nothing else matters half as much, because if fear stifles you, you'll never share the world you've created with anyone.

TQ:  What do you wish that you knew about book publishing when Archon came out that you know now?

SB:  So much has changed in the publishing industry since Archon first arrived on shelves, that it's mind-boggling. When I sold Archon, e-books were just starting to become popular, and very few authors started their careers by self-publishing anything digitally. It's hard to believe that was only back in 2010. Most of us still had to travel the long and challenging route of finding an agent, and then hopefully a publisher, and more often than not, a book wouldn't sell. I was lucky enough to sell Archon and its sequels relatively quickly all things considered. To be honest, there is incredible opportunity nowadays. In fact, it would be fair to say that a writer's career never has to be over anymore, because the options to publish your work are now more accessible than ever. You still can't match the marketing and publicity powerhouse of a traditional publisher, but it's still amazing to know that so many paths to reach your dreams exist. So if there is one thing I wish I knew back then, it would be that despite setbacks, persistence truly pays off even more than you're initially led to believe.

TQ:  Tell us something about Angelus that is not found in the book description.

SB:  Angelus is a book that takes risks in how the story ends. I wanted an epic and original conclusion to a story that was, in all honesty, probably too big for only three novels. But I'm really happy with it, and I'm hoping readers will be too. A lot of people didn't understand where I was going with the story that began in Archon, but trust me when I say, it all truly comes together at the end.

TQ:  Which character in the Books of Raziel trilogy has surprised you the most? Who has been the hardest character to write and why?

SB:  Unlike most authors I know, I had the most surprises and problems with my main character, Angela Mathers. You will understand why once you read the end of Angelus, and you will probably commiserate with me, but I mean that in a good way. Angela turned out to be an incredible character with an amazing past and future. But she constantly evolved and was difficult to pin down. Whereas most authors tends to reflect themselves in their main character, Angela has few personal traits in common with me, which was both refreshing and a true challenge, because I was always getting to know her just like the reader. But overall, writing her character was a truly enriching and rewarding experience from beginning to end. I really felt like I was on a journey with her.

TQ:  Angelus is described as "a gothic supernatural tale". In your opinion, what makes a story "gothic"?

SB:  A story being 'gothic' is really all about the atmosphere. It's the world you create and how you convey it. The gothic has a lot to do with the contrast between light and darkness, characters that have strong passions that are ironically difficult to define as good or evil, and underlying currents of otherworldliness and dread. You might not get scared when you read a gothic novel, but you will probably feel uneasy, and definitely absorbed in a world that's familiar but frightening at the same time. In the gothic, there is a beauty to the darkness that draws you in and refuses to let go.

TQ:  Please give us one or two of your favorite non-spoilery lines from Angelus.

SB:  There is one line in Angelus, spoken by a very important character named Sophia, that basically sums up the entirety of the story. "A mother does anything and everything for her children--until they are beyond all possible help." Angela's story begins and eventually ends there. It is the central point around which the entire trilogy pivots. And I'm sure any of you Moms out there will agree with that quote one hundred percent. The world of Angelus is ultimately our world, and though it's characters might be angels, demons, or other supernatural creatures, they still live by the same fundamental truths as you and me.

TQ:  What does is feel like to end the Books of Raziel trilogy?

SB:  It's a surreal feeling to have finally concluded the trilogy. I've inhabited Angela's world and known the characters for a long, long time. And I'm including years before the first novel Archon was even published. So much has changed since then and I've learned and grown so much more as a writer (because writers are always learning and growing like any artist), that it's incredible to think I am now moving on to new worlds, stories, and people who inhabit them. I will miss Angela and her world, but I'm also ready to move on. That's just life.

SB:  It's hard for me to steer too far from fantasy fiction. Every time I write, something supernatural or fantastical always seems to creep in, no matter what I do. Maybe it's in my blood. Archon, Covenant, and Angelus were books that focused on Western mythology and religious elements like angels and demons. I find myself now moving on to mythologies from other cultures. I've really been wanting to write a great fantasy based in Asian mythology. Then again, I also have a great idea for a dark urban fantasy, and even a dystopian novel.

SB:  Thank you again for interviewing me, and for the opportunity to share my thoughts on writing and a little bit about Angelus. I'm so excited for people to read it, and I'm grateful you could help me spread the news to readers out there! 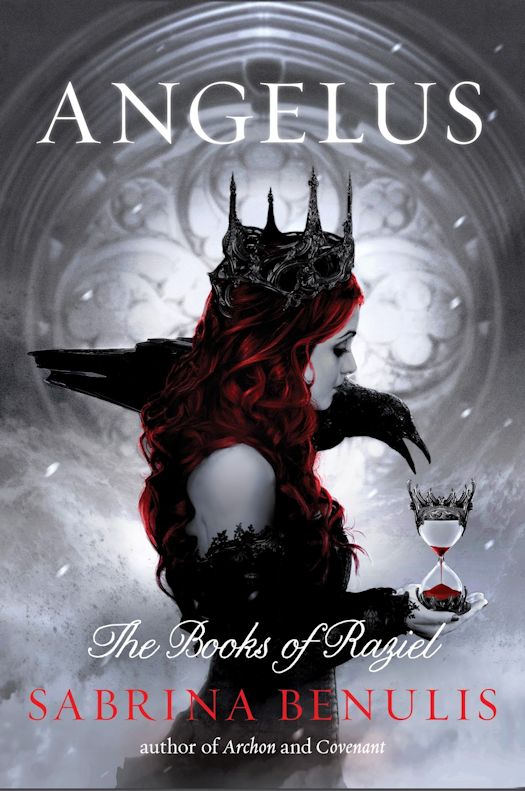 The heart-pounding conclusion to the Books of Raziel trilogy, a gothic supernatural tale about a girl who discovers that she holds the keys to both Heaven and Hell—and that angels, demons, and all the creatures in between who will stop at nothing to possess her and control the power she holds.

The war begun by three powerful angel siblings—Raziel, Lucifel, and Israfel—has divided the kingdoms of both Heaven and Hell, and the destruction is spilling over into the human world.

The last hope for a crumbling world is the Archon—the human Angela Mathers who has the power to control the supernatural universe. Angela alone can successfully oppose Lucifel and open Raziel’s Book, to use its power for good. But to do so would mean murdering her best friend, a sacrifice Angela refuses to contemplate.

Angela sits on the throne of Hell, fulfilling a prophecy of ruin. But ruin does not always mean destruction—sometimes it means revolution. Time is running out for both Angela and the universe, and former enemies are eager to see her fail. As she enters the Angelus duel for the crown of Heaven, she can only pray that she’ll see her friends again. 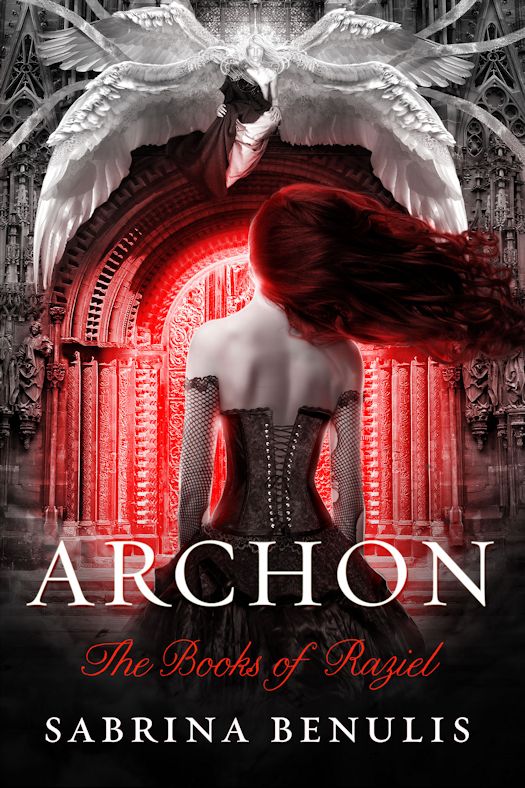 Angels and demons do battle for a girl possessed by the spirit of a powerful, dead angel in this fabulous paranormal debut by Sabrina Benulis. Archon is the first of the Books of Raziel, a truly fantastic and very hip new take on heaven’s warriors that readers of the angelic novels of Danielle Trussoni, Lauren Kate, Becca Fitzpatrick, and Alexandra Adornetto are sure to adore. Archon is new wave urban fantasy, a tale of the supernatural that brilliantly blends passion, obsession, horror, and suspense in a way that will appeal to dark fantasy fans and paranormal romance readers equally. Sabrina Benulis’s angels are creepy, sexy, and totally awesome—and, like Anne Rice’s amoral, ambiguous, and addicting vampires, they will seduce and terrify you at the same time. 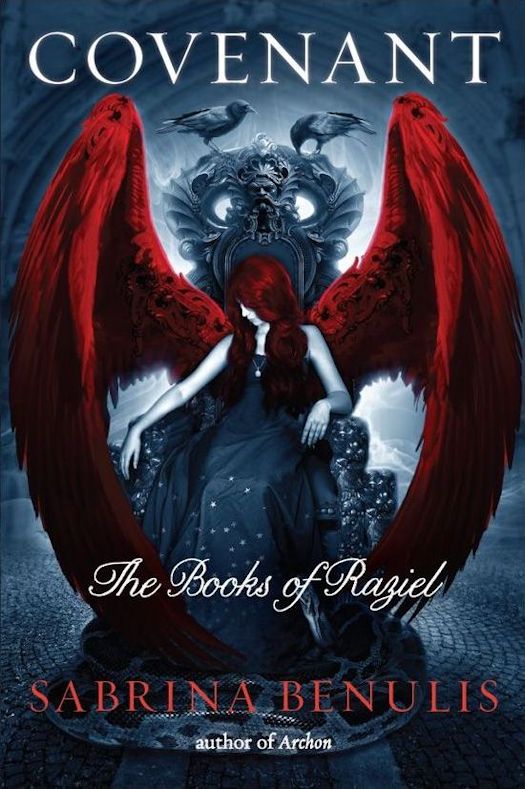 The haunting gothic tale started in Archon continues-a mesmerizing work of the paranormal in which a young woman discovers that she is caught in a labyrinth of intrigue where angels, demons, and all the creatures between Heaven and Hell will stop at nothing to possess her.

A year ago, Angela Mathers, a talented artist with a tortured soul, enrolled at the Westwood Academy and encountered the angels who haunted her dreams. Then she discovered the dark truth … she is the Archon, a being of supreme power who will determine the fate of the universe. But with such power comes great danger, and for every force seeking to aid Angela there is another burning to stop her. After a scheming demon kidnaps the Book of Raziel, Angela must find her way through a nightmarish game and enter the Door to Hell to rescue her only friend before it is too late.

The perilous fate of both Heaven and Hell rests on her success.

Sabrina Benulis graduated with a masters in Writing Popular Fiction from Seton Hill University. She currently resides in the Pocono Mountains of Pennsylvania with her husband and a spoiled cockatiel.