Review: Blood in Her Veins by Faith Hunter 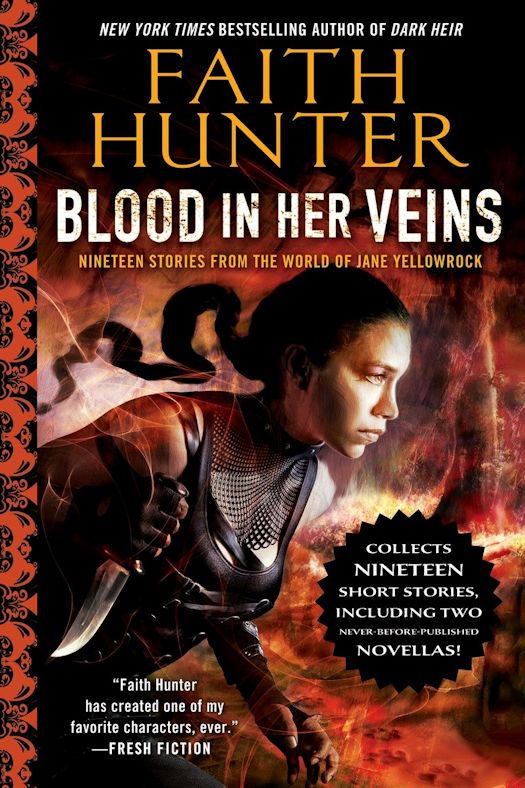 In this must-have collection of stories, experience nineteen thrilling adventures from the world of vampire-hunter Jane Yellowrock, including many fan favorites and two all-new novellas. Read about the first time Jane put the pedal to the metal in “The Early Years,” and the last thing a werewolf will ever see as Jane delivers justice in “Beneath a Bloody Moon.” Get a searing look into the pasts of some of the series’ best-loved characters: Beast in “WeSa and the Lumber King,” Rick LaFleur in “Cat Tats,” and Molly Everhart Trueblood in “Haints.”

In the brand-new “Cat Fight,” the witches and vampires of Bayou, Oiseau, are at war over a magical talisman—and Jane must figure out how to keep the mysterious artifact out of the covetous hands of the Master of New Orleans. And in the never-before-published “Bound No More,” Jane welcomes a visit from Molly and her daughter, Angie, who is about to prove she’s the most powerful witch in Everhart history….

From the Big Easy to the bad bayou, from the open road to a vampire’s lair—with Jane Yellowrock, it’s always a given: have stakes, will travel.

Blood in Her Veins is a terrific addition to the Jane Yellowrock canon; however, newcomers should probably start with Skinwalker, the first novel in the Jane Yellowrock series. This is a terrific collection of stories that center around Jane and some of her secondary characters. About half of the stories focus on Jane herself, while the others are told from the perspective of others. Hunter has collected stories that were published elsewhere as well as a couple of new stories, and in the process, she elaborates on her best characters.

Jane’s story originally starts in the middle of her vampire hunting days, and memories of her early years have been doled out judiciously throughout the rest of the series. Here are a couple of takes that focus on her life before vampires. In “WeSa and the Lumber King,” we see Jane early in her bond with Bigcat, and while she takes little action herself, she is instrumental in the puma’s actions against the white men who are destroying the best hunting lands. “Snafu” introduces Jane as a new apprentice who is being tested by her employer.

Those stories told from the perspective of secondary characters often center on Jane herself and offer a different perspective of the woman. Several stories have been written from the perspective of Ricky Bo, Jane’s first boyfriend. The stories here explain how he becomes a werecat and how Jane gets him the training that he needs to deal with the change. Recently, however, Bruiser has begun courting Jane, and their interaction is rather sweet. “First Sight” is short, little more than a scene sketch, but it makes shows the reason why Bruiser was interested in Jane from the beginning, even before she was aware of it. “Dance Master” is a terrific little story that looks like nothing more than the description of a dance Jane and Bruiser share, but is really so much more.

Several of the stories focus on Molly Trueborn Everhart, a witch with numerous sisters, two children, and a large husband. As Jane’s best friend, Molly often gets pulled into her cases and ends up helping magically. During several novels, Molly and Jane were somewhat estranged, and few of those stories focus on that time period. One of the stories actually focuses on two of Molly’s sisters, and Jane only appears briefly at the end.

Overall, these stories are terrific. They fill in gaps that most readers never realize are in the primary novels. Jane herself is very modest, never recognizing the effect she has on others; seeing her through other people’s eyes better fills out her description. Nothing is better than finding a new book in a favorite series, but short stories that occur in between the novels are the next best thing.